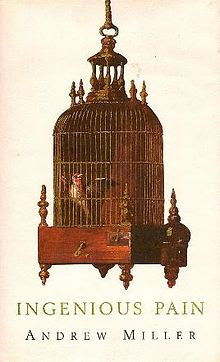 We live in a world that tells us we should strive towards happiness and avoid pain at all costs.

This is quite a new notion and could probably have never have been conceived for most of the eighteenth century. We read Boswell’s journal, William Hicks or other reporters of life and pain was ubiquitous in the eighteenth century. In an era when alcohol was the closest to a painkiller and a good surgeon was one who could cut quickly, a life without pain might be desirable but not in the slightest bit achievable. These days, we can dull mental and physical anguish and although we are some way off living completely painless, we are far closer to it then our forebears. But what if that pain was vital?

That’s the question posed by Andrew Miller’s 1997 debut ‘Ingenious Pain’. It’s the story of James Dyer, a man who cannot feel pain and the kind of person and life this leads him to. It’s set in the eighteenth century, full of lots of period detail but it is not a completely realist novel, his lack of pain extends to all feelings both emotional and physical - it’s clearly a symbolic numbness working in the story. It reminds me a lot of Jean-Baptiste Grenouille’s lack of odour in ‘Perfume’.

As a result of his numbness (though referred to as coldness in the book) he becomes a brilliant and adept doctor and saver of lives but a harsh and unpleasant man. He is all thought and talent but no feeling. This makes the book a little slow at first, it’s hard to care about the machinations of a plot on a character who can’t really feel one way or another about his situation. This is helped a little by the eventual introduction of other characters we can feel for and in changes in Dyer’s own circumstances.

Miller seems to be a novelist who favours ideas and set-pieces over tight plotting. Dyer is thrown into lots of situations, from toad-eater at a mountebank medical show, to ship’s surgeon to society doctor in order for the novel to show how useful it may be not feel but how limiting, concluding that it is pain that unites humanity and allows us to share with each other. There is also an underlying battle between the coldness of science and rationality and it’s opposite, an instinctive, irrationality.

This book is best at scenes than as a whole story. There is an autopsy that shares in the same horror as Hogarth’s autopsy in ‘Reward for cruelty’. There is a visceral description of smallpox, describing the skin boiling like milk before scabbing over and killing its victim. There are scenes on a man-of-war, scenes of surgery, including a stomach-churningly unsuccessful operation to separate conjoined twins. Near the end of the book there is an oddly sweet sequence about ‘A Midsummer Night’s Dream’ being put on in Bedlam.

The writing is clear, gripping and interesting but without being distracting and it manages to adopt eighteenth century phrasing and vocabulary without being quaint.

I very much enjoyed this book and I look forward to reading his other eighteenth-century set books, one about Casanova and the other being the Costa-winning, ‘Pure’.