Among the people swirling around the station, running to a train or cursing the lines closed for weekend maintenance, stood the Dr Johnson’s House Reading Circle. Slightly shocked at the crowds, some bright spark figures out which platform the next Oxford train will be on and we bundle to the front, managing to seat ourselves comfortably.

We peeled off into little groups on the train; I heard hair-raising stories of exotic travels, featuring sultry beauties, tomb-raiders and dodgy contacts before pitting wits against a cryptic crossword. Never having done one before, it was like stepping into a whole world of weirdness, where the following sentence is supposed to make sense: ‘Heavenly body mostly struck that woman as alluring (4-6)’

Finally arriving in Oxford, we bobbed and weaved our way through the crowds - following local knowledge and arriving up at our key Johnsonian attraction, Pembroke College where Boswell says he lived ‘upon the second floor over the gateway’ and ‘the enthusiast of learning will ever contemplate it with veneration’. So we did.

Indeed, we did more than that. We were met by the bursar, a librarian and a professor of the History of English and an author on Johnson and dictionaries. This A Team split us in two groups, one to tour the college and one to explore the library. 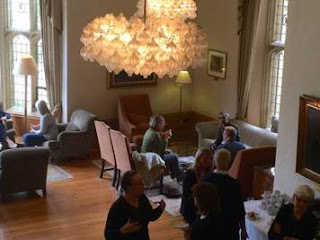 Here we're in the staff common room, I am here, find the wally.

The tour was conducted by the bursar and so we received many little behind the scenes tit-bits about how Pembroke was moving into the 21st Century, and how the college had grown out since Johnson’s day onto what had previously been a public street and also into (and over) Oxford’s medieval walls.

We explored the dining hall, the chapel (built during the time Johnson was a member) and up the creaking wooden stairs to Johnson’s room. I reckon it’d have been a decent little place to live as a student. Nowadays it is the office for the Rawlinson and Bosworth Professor of Anglo-Saxon, once held by JRR Tolkien. 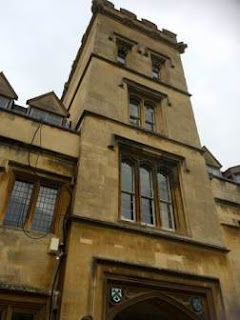 Johnson's room was the second one down.

We were then taken to the library where the librarian and lecturer showed us various items, including some of Johnson’s letters, his private prayers and meditation and some of his university essays. he had neater writing as a student, perhaps he was trying to impress. We also saw the library records which show a library book still overdue and the battle books, written in an undeciphered squiggly code. The numbers at the end show Johnson living at steady expense, not altering as his expenses begin to dry up. We chatted about the heavy editing of the prayers and how Oxford’s best text-detectives had been unable to scan or read those excised parts and we speculated what might be in them.

Then we had all the sandwiches we could eat and those other Reading Circle staples, wine or elderflower fizz, before thanking everyone and heading back into the crowds of Oxford.

Round Christ Church, through the huge queue in, down the Cherwell, glancing across Christ Church fields and thinking of the film Shadowlands, we then went to Magdalen College.

A larger college, with Alumni such as Oscar Wilde, William Tyndale and Edward Gibbon, we split up to cover more ground. The cloistered quads with white hydrangeas and statues led to secret gardens, a deer park and a building called The New Building built in 1773. The highlight was probably the chapel, built in 1474 with sepia stained glass windows that make the stone roof look like a trompe l’oeil.

Wrestling through the crowds, we got to the Ashmolean, where we split up, some to go home, some for a cup of tea and some to explore more.

One of the frequent topics of conversation was our various reflections on our own university and young-adult experiences. When asked if she’d enjoyed university years, one gave the reply, ‘I thought I was at the time.’  Johnson and Boswell had a similar conversation.

“Dr. ADAMS told me that Johnson, while he was at Pembroke College, “was caressed and loved by all about him, was a gay and frolicksome fellow, and passed there the happiest part of his life.” But this is a striking proof of the fallacy of appearances, and how little any of us know of the real internal state even of those whom we see most frequently; for the truth is, that he was then depressed by poverty, and irritated by disease. When I mentioned to him this account as given me by Dr. ADAMS, he said, “Ah, Sir, I was mad and violent. It was bitterness which they mistook for frolick. I was miserably poor, and I thought to fight my way by my literature and my wit; so I disregarded all power and all authority.”

Not that I take Johnson at his word, he revisited Oxford many times since and complained about it in that way that confirms an affection for the place. As for me, I had never been to Oxford before and enjoyed myself a great time.

Session for the reading circle start on the 26th of September with another Boswell chunk. Following that we should be joined by the authors for Jacqueline Riding’s Jacobites and Kate Chisholm’s Wit’s and Wives, about Johnson’s relations with women.

Email ThisBlogThis!Share to TwitterShare to FacebookShare to Pinterest
Labels: At Home With Samuel Johnson, Trips