It’s strange, the amount of times I have talked about Samuel Johnson and attended events at Dr Johnson's House but never talked about it on here.

The house, in Gough Square, is the one Johnson rented and lived in as he compiled his Dictionary and wrote his Rambler essays. Shortly after the completion of the dictionary, Johnson had to move out but the house remained and, even in the constantly changing face of London, managed to still stand.

In 1911 it was bought by liberal MP, Cecil Harmsworth and dedicated to the memory of Samuel Johnson, intending it to feel like a warm home rather than an uptight museum. During WWII, the house was used as a canteen and social club for the firemen who fought against the firestorms of the Blitz. The house was hit a number of times but luckily, never burnt down.

Now, it is open to the public, runs a number of interesting events and is where I go every couple of months to talk about the eighteenth century. Each of the rooms tells a different aspect of Johnson’s life and there are many portraits and prints around the walls to introduce various people in Johnson’s life. The house also has a copy of his will, various items belonging to friends and a fully stocked library with some of Johnson’s own books and a facsimile copy of his dictionary always open to look at.

One of the real joys of the house is the fact that you can feel it as a working house. The rooms feel homely, the various domestic partitions and clever little hideaways add to the feeling that people lived there. A large corkscrew device by the front door still stands as a deterrent against thieves and bailiffs and the central stairs still remain the hub of the house, taking us to Johnson’s bedroom or up the ‘four-pair’ to the wonderfully atmospheric Dictionary Garret. 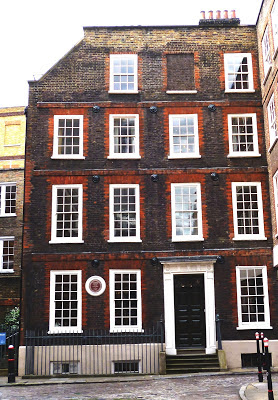 But I mention this because of the new exhibition, ‘Collecting Johnson’. If it’s somewhere you’ve been putting off visiting, this is the time to go.

Included in the entrance ticket, ‘Collecting Johnson’ has a number of objects and works never before seen in public, borrowed from collectors across the world. There’s a letter from Johnson to Hester Thrale, addressed in warm and familiar terms; there are rare copies of works by and owned by friends such as Sheridan and Goldsmith, there’s a copy of a very early biography which Johnson wrote for the Gentleman’s Magazine, of which only three others exist.. there’s a lot more.

My personal favourites included the book by Bow-Street Runner, Saunders Welch (though probably actually written by Johnson), a bound copy of Johnson’s plan for his dictionary and a hand-written subscription card for his edition of Shakespeare, which came out nine years later after Johnson had lost his list of subscribers.

As well as all of this, there’s a never-before-seen x-ray of a portrait of Johnson’s and a very impractical looking snuff-box owned by Boswell. Chatting to the curator about it, she said that when she placed the lid on and ‘jiggled it about’ (technical term) it held together surprisingly well.

I’m sure it’s pretty obvious that I love Dr Johnson’s House and I loved the exhibition, but toddling along in the next few months is highly recommended because of that extra Johnsonian bang for your buck - and if you went a few years ago, go again as there are things there that will never be available again. 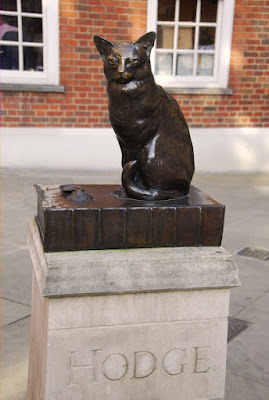 Email ThisBlogThis!Share to TwitterShare to FacebookShare to Pinterest
Labels: At Home With Samuel Johnson, Reviews, Trips