Review: A Visit from Voltaire by Dinah Lee Küng 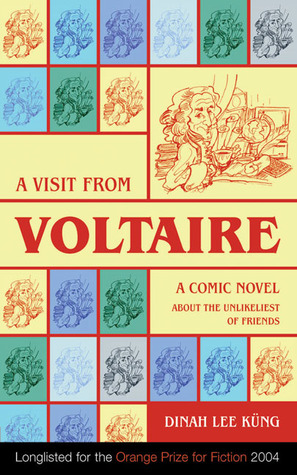 A Visit from Voltaire is a book that makes absolutely no sense. The cover proclaims it a novel but it seems to be anything but. If the blurb is to believed, it’s about an American woman who moves to Switzerland with her family and finds it difficult to acclimatise to the new culture, she’s helped along the way by a man who turns up, claiming to be Voltaire. The blurb is not to be believed.

For a start, the main character and her family may be fictionalised but they are not fictional. The husband in the book is the author’s husband, with the same name and job; the children are her children and the main character is the author herself. If anything, it seems more like diary extracts of her move and the feeling of alienation she has with Wikipedia articles of Voltaire dropped in. I couldn’t find a description of how this book came about but I imagined that she’d moved to Switzerland, felt cut off from her old role as a foreign reporter in Hong Kong and trapped by the Swiss expectations of motherhood which led her to reading a life of Voltaire, creating imaginary conversations with him as she performed her daily chores. What’s more, a detail at the beginning, where her mother’s books on history were sent to her rather than her own was, I think, the secret catalyst that sparked her interest in Voltaire.

Not only does my little supposition seem to fit, it’s the only reason I can think of that the character that follows her around is Voltaire rather than anyone else, there is no answer to the question, ‘why Voltaire?’ It’s doesn’t even adopt the playful notion that the person coming around her house is a person from the village who thinks he’s Voltaire but is straight up Voltaire’s ghost who simply pops up, much as an imaginary Voltaire might to a bored woman wandering about her cut-off Swiss house.

There’s not a plot to the book exactly, the book goes through Voltaire’s life chronologically, with the ghost ageing as it continues. In each chapter, Voltaire’s life throws up some theme in which the daily Swiss life or in her memories of being a reporter in Hong Kong are awkwardly made to reflect. Early in his life, Voltaire was put in prison, so her son accidentally commits a crime and is hard in front of the town council. At another time Voltaire uncovered a scandal, so she remembers uncovering a scandal during her reporter days. Voltaire spent some time in England, so the main character suddenly has some English friends she has to visit. The book never makes a convincing case that Voltaire’s memories of the eighteenth century, the memories of 90s China and the modern experience in Switzerland ever match up convincingly. The whole book creaks with contrivance.

I can’t say I liked the narrating character very much. Compared with Voltaire, her spirit seemed so petty and she never seemed to learn much. There was a definite whiff of racism; from her broad grouping national stereotypes (even in places she’d lived), to her distaste of Kwanzaa, Hanukkah and other non-Christian winter festivals and her seeming hatred of the Swiss as conservative and small-minded. She didn’t seem a great mother, seeming rather uninterested in her children and finding them a hinderance to her own interests, resenting her daughter for fitting in more successfully than her and the odd thing that she made them only watch old videos - leading to her children playing ‘I, Claudius’ for fun. (Really - why be so strict about what they watch that they only have access to pre-approved things and then giving them something as adult at that?)

The part which solidified my dislike for the narrator was a chapter themed around Voltaire’s time in the French court under the patronage of Madame de Pompadour. The narrator declares her own marriage as a bit tired and Voltaire agrees it is a little ‘sombre’, suggesting that she liven things up with a party the way Madame de Pompadour used to. The two proceed to plan a party, he in his royal eighteenth century opulence, she toning him down. Already the party is not being held for honest social reasons but to liven up her sex-life, the guests she invites are not really her friends (and if they are, why does she have such rude friends?) and the gathering has no real connection. Because the people in the party all seem like they’d rather not be with each other, it feels like an episode of ‘Come Dine With Me’ where everything relies on the food and entertainment rather than the enjoyment of company. It summed the narrator up for me, obsessing over the details and missing the main point.

I found most of her friendships hard to believe in, either coming about because they were useful to her work or because they had access to someone who might be useful. In a chapter that was supposed to be sad, a friend of hers comes over to Switzerland to recuperate after a car accident that has caused her to lose an arm and an eye. Maybe it’s the Brit in me, but it seemed completely strange that neither of them made pirate jokes - it didn’t feel like real friendship at all.

Yet - as much as the book seemed like a strange bashing together of elements that didn’t work, I peculiarly liked it. The real Voltaire was an interesting person, with an interesting life and even this slightly weak-sauce ghost version of him made interesting company. Also, while her relationships with her family and her supposed friends didn’t ring very true (or if true, not very warm), the relationship with the Voltaire ghost was peculiarly charming. My own fantasised origin story for this book, that the author imagined her own Voltaire when she was wandering about at home, comes from my own experiences of internally talking to an imaginary Samuel Johnson when I’m doing my own boring chores. Through this, I saw a vulnerability in the narrator that got me to like her and feel for her, lost in the Swiss winter.

At the end of the book, she and Voltaire take a visit to his last home where a ‘well fed college girl’ gives a tour of his house. She knows all the facts of his life but none of the flavour. I finished reading this book in a Dr Johnson’s House, a museum where I (myself rather well fed) talk to people about Samuel Johnson. It got me thinking about how much my own discussion of him is related to my imaginings of what he’d be like if he saw the world now. Ultimately, I concluded that both my imaginary Samuel Johnson and the Samuel Johnson of facts are not the historical one and it’s impossible to get to know him - this book concluded that the narrator knew Voltaire better than anyone else ever could. I’m done with this book.