The first thing that needs to be made clear about Hurlothrumbo is that although it’s by a Samuel Johnson, it’s not by that Samuel Johnson. This Samuel Johnson was a Cheshire dancing master and one of the last official family fools who was also known as Maggoty. He was a man who amused a lot of important people, including members of the Rockingham Whigs and Robert Walpole.

The second thing that needs noting about Hurlothrumbo is that it was incredibly successful, running for 50 nights, coming close to The Beggar’s Opera’s 62. The other Samuel Johnson’s play Irene ran for 9 which was considered decent. This means that ‘Maggoty’ Johnson would have received at least sixteen benefit nights as the author, not counting any benefits or wages given to him as one of the performers.

The last main thing to note, is that Hurlothrumbo’s success makes absolutely no sense. Ridiculed as a peculiar mess when it was first performed, Johnson’s appearance as Lord Flame, sometimes on stilts and sometimes not, is utterly baffling. Even more baffling now we have no clear report of how it was staged and what effects it created other than, ‘odd, whimsical and original’. As far as I can tell, this was a play people went to so they could talk about it and laugh at it, much as people may watch The Room or other films noted as so bad, they’re good.

The play is set in a Kingdom somewhere, where the King Soarethereal rules. He is a daydreamy person, given to intellectual pursuits. A character describes him as being ‘above this sublunary world,’ who ‘keeps his court in the horizon’ and ‘makes a foot-ball of the globe’. Apparently he also ‘plays bowls with the sky’. He’s also in love, having absconded a Princess of Spain with the help of her brother Theorbeo.

There’s unrest in his realm, some of his noblemen have sold off their property, a sure sign that they are squirrelling money away incase of unrest and the Dutch King Lomporhomock has been sighted but these should not be a problem as Hurlothrumbo, a general brave enough to have a murdered a lion in a Roman gladiatorial match, is on hand to protect them.

Unfortunately, the rebels bribe Hurlothrumbo and the King and his allies find themselves outnumbered, outgunned and facing a sticky end. Theorbeo, the Spanish prince finds himself sent to ‘The House of Burning Glass’, a way of killing people with refracted sunlight.

Fortunately, King Soarethereal and his allies win despite the odds, the rebels exiled, Lompohomock driven off and Hurlothrumbo very sorry and condemned to wear a coat with his crimes written on them for the rest of his life.

Oh - and Lord Flame is there.

His role is a real conundrum. He’s a spurned lover, sometimes he serves as Greek chorus, sometimes he simply talks. He’s always remembered as the main character but he isn’t, although I can see why he was the most memorable one.

The real mystery I have about this play is the intention. Certainly the version I have (essentially a photocopy of the second edition) is packaged like a comedy, there’s a comic tag line on the title page which reads;

Similarly, the epilogue seems to acknowledge the ridiculous nature of the play. The Biographia Dramatica of 1782 described the epilogue as having been written ‘by a friendly hint’ to point out ‘the absurdity of the play’.

There’s also ‘Maggoty’ Johnson’s reputation as a professional fool (in the jester sense) and his performance of the character of Lord Flame, which the Biographia described as ‘sometimes in one key, sometimes in another; sometimes fiddling, sometimes dancing, and sometimes walking in very high stilts.” Surely it must be intended a comedy, if the author performs his character in such a strange way.

As jokey as everything surrounding the play is, the play itself feels serious, not only serious but grand and important, it’s like the play is desperately trying to reach a weight and beauty that condemns it to nonsense.

There are certainly a semblance of structure and definite themes, of the conflict between ambition and contentment, and a conflict between worldly and unworldly characters. Our heroes, Soaretherial (and to a lesser extent Flame) are flighty, their eyes fixed to the heavens - in his stilts, Lord Flame sometimes literally had his head in the clouds. The bad characters are more grounded, concerned with money rather than higher things like love and the heavens.

The title character of Hurlothrumbo is the central battleground between the high and low. At his best, when fighting the lion, he is a man of ideals but at his worst can be paid off. This might be the moment to note that the description of the lion fight must be one of the most wonderfully over the top monologues ever. 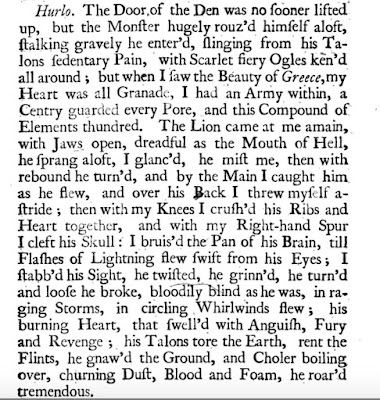 He’s also described as being so on the alert, that his very pores have sentries.

The sun also pops up a lot. It’s not a controlled metaphor, nothing in the play is controlled, but it is frequent. The sun is gazed on, reached for, straddled, ridden, burns out of people’s eyes. When Theorbeo is caught by enemies he is taken to ‘The House of Burning Glass’ to die like a dog in a closed car but is rescued by a lucky cloud. At one point Hurlothrumbo compares the Earth to a joint of meat roasting on a jack, the fruits ripening much like meat cooks though he ultimately wishes that the sun would come closer and kill everyone.

The problem with the sun metaphor in the play is that it stands for whatever is needed at each moment, it’s not a sustained or controlled motif. There’s also the specificity of the metaphors which derail them, the example of the Sun and Earth like roast meat on a jack, or the king pledging to feed his troops brandy mixed with gunpowder as it will make them like dragons and;
“Then Swift lightning bolts from the nostrils flies, and lightning bolts from the anus.” He simply gets too enthused by the image that has caught his imagination.

The best discussion of Hurlothrumbo I found was in an introduction to an eighteenth century  book  The Bog-House Miscellany, that records graffiti on toilet walls which was attributed to an author called Hurlothrumbo. The author of the piece reckons that Samuel ‘Maggoty’ Johnson was the author of  the bog house book also and has a little discussion of Hurlothrumbo itself where he says that the play is not intending to be a satire of tragic excess but is the work of;
“The mystic whose tendency is to merge the high and the low, the sublime and the absurd, within a single work”.

I described this play to my friends as eighteenth century The Room and I think what happened to that film is what happened to Hurlothrumbo. The Room was intended to be a moving domestic tragedy but due to technical incompetence, over-stuffed writing and a truly eccentric performance from its writer/director/star that it became a loved comic work. That writer, Tommy Wiseau, quickly declared he had been intending a back comedy all along and since toured the film to be ridiculed and loved at cinemas all over the world, accepting the ridicule but also the love.

I feel that Samuel ‘Maggoty’ Johnson may have done something similar with Hurlothrumbo, to have reached for something so sublime and so very idiosyncratic that it was a source of ridicule but to have leaned into it to enjoy the love that we have for something that makes us laugh (not forgetting the serious financial benefit of a 50 night run and two editions of the script sold in quick succession).

Another thing it reminded of was Death's Jest Book, an unperformed play that so caught it's authors imagination that it toppled in on itself.

This confusion with the piece is reflected in the prologue. On one hand, it acts as a warning, that the piece is ‘unchained by `art’ and gives ‘criticks’ the warning to ‘be gone’ because like swine, they wouldn’t understand the pearls that were to be cast before them and that as wolves howl at the moon, so critics hate anything not as earthbound and sluggish as they. On the other hand it revels in its lack of artistry, declaring that;
“Rules were by coxcombs made to cramp the mind, by nature free, unfetter’d and unconfin’d.”

Not enough of the performance, or the context for it, exists now to really get why this play was the success it was. The script is quite hilarious in small bursts but rather tiresome overall and the character of Lord Flame, on stilts or not, makes absolutely no sense to me. I think you really had to be there, but I can get the ghost of a glimpse why.

(Also, as a total aside, the Hurlothrumbo was the name of the ship owned by Joshua Norton, one of my favourite historical oddities, who later declared himself Emperor of the United States and Lord Protector of Mexico, and was actually obeyed in San Francisco.)