Review: A Pickle for the Knowing Ones by Timothy Dexter 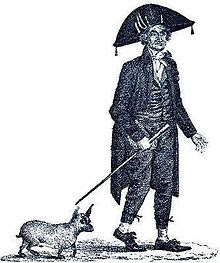 If last week’s entry Hurlothrumbo was a little unusual, A Pickle for the Knowing Ones is something utterly bonkers. I was introduced to it in a slightly odd way, a Polish teacher working at the same primary school as me ordered a copy for her year 4 (aged 8-9) class. I never heard an explanation of why this book was chosen, whether it has a particular cultural relevance in Poland or what the book was for. All I knew was that there was  this very badly made rich-text print-on-demand book written in the eighteenth century and of captivating oddness. So I prigged it.

A Pickle for the Knowing Ones or Plain Truths in a Homespun Dress was originally a free text given out by an eccentric Massachusetts businessman named Timothy Dexter. He was largely uneducated and it shows in the book, which consists of lots of scraps of writing, badly spelt and not at all punctuated, often making very little sense. Ever listened to a Legendary Stardust Cowboy album or spent time in Anti-vax Facebook? If so, the incoherence and tone will be recognisable. I, however, Have spent the last 11 years reading children’s scrawls in exercise books - I can do this.

The first part is a description on his house and garden, much as Horace Walpole did for visitors to Strawberry Hill. His house in Newburyport was decorated in forty wooden statues of great people set ‘hiw up’ so that people can ‘peape sly and feele glad’ at considering such great people. This leads him to consider the nature of greatness and on the greatness of American Presidents in particular. He considers that being a president is like being a king but should ‘pleas the Peopel at large.’

He addresses himself to ‘Mr Pintterr’ (alas, not Mr Editor) and describes/rants about the people who have wronged him in the past, including the lawyer hired by his son-in-law to beat him up. This leads him to philosophical thoughts (as in the thoughts of a ‘flosofer’) about the nature of mankind.
“Tell trouth Man is the best Annemel and the worst”. He concludes that we resemble different kinds of animals, ‘sum like a dog sum Lik horses sum bare sum Cat sum Lion sum like Ouls sum a Monkey sum Wild Cat sum lam sum A Dove sum a hogg sum a oxe sum a snake” - though he doesn’t really elucidate in what way people are like this, he does extend the idea, deciding that there are lots of different kinds of people, “there is Grat Minds and littel minds Grat sols anf littel sols grat minds and littel minds”.

In the next section, he tells us his disdain for people of learning, which doesn’t surprise anyone who's read up to this point. He also dislikes priests.

The next section is his plan to build a great ‘mouserum’ if none of his enemies murder him first. He plans to fill this place with many examples of greatness and while he’s at it he concocts a plan for world peace. This plan consists of world leaders meeting round a common table to discuss problems, a precursor to the UN perhaps. He thinks the chair of this meeting should be that peaceful soul, ‘boneypartey’. He warns those who scorn his museum that they shall look silly in the end. Then he talks about meeting the devil…I think…and the devil came in the form of a black slave…to be honest, this was the bit I couldn’t understand at all.

The next part is a longer denunciation of the lawyer who beat him up at the orders of his son-in-law.

Now he seems to have a transcriber, perhaps it originally appeared in the newspaper. The ideas still have the same strident tone and car-crash pileup, but they are properly spelt. The first part is a call against ruffians in the neighbourhood. The second is a little more philosophy, that the world is “one very large living creature”, possibly a precursor to Gaia theory. On this living creature, man is the head animal and “the whale is the head fish”. Then the section goes into his own full style and he talks about how he hates his learned son-in-law and considers his wife to be like a ghost.

The next section is about how the masons won’t let him in because he has ‘toue much knowledge in my head” but it doesn’t matter, because they’re rubbish anyway.

The next section again details his grievances, that his son was an idiot, that his daughter married a cruel thief who hired a lawyer to beat him up and that his wife is a cruel ghost. It’s not that he’s a bad person, he wouldn’t hurt man nor beast, well, perhaps some beasts.
“I Meane no hurt to A Flie only when he bits me when I kils the flye if I can”. You should feel sorry for such a man, his family are really mean to him and it makes him sad.  “with tears in my Eys I Can’t see to Rite Aany more”.

The next part is how he made his money. He collected useless currency and then sold it back to the government at a fraction of the cost but more than he paid for it. He sold warming pans to the Caribbean, although they used them as molasses ladles. He hoarded whalebone and got lucky when the French started a fashion for men’s corsets. He sold Bibles to Asia, not to the people living there, but to missionaries. He caught stray cats and sold them as mousers to plantations. He sold woollen gloves in the East Indies to a group of Portuguese traders going to Alaska. Finally, he literally managed to sell coal to Newcastle as the coal miners were on strike when his ships arrived. Was it luck? Was it intelligence? Who knows? This ranty mess doesn’t help clear that up.

The next section changes tack - his son-in-law has just died. The world is a wonderful place.

The next section is about drought I think - I got lost on this part also.

The next part is a summing up, a boasting of his achievements despite his not having much. He boasts that one of the few skills he has is to “play on A Jous harp” which was so good “it would mak my mouth warter and the ladeys sumthing warter”. I’ve heard the Jew’s Harp and I didn’t realise it had aphrodisiac qualities but Timothy Dexter claims it’s true.

In the next section he feels bad again. Everyone in the world except him is a liar and what’s worse, “the burds will Chip offen before I Can git to sleep”.

The last part is not written by Timothy Dexter but by Jonathan Plummer, whom he paid to be his poet. He must have paid fairly well as Plummer writes a panegyric that trumpets Dexter’s wisdom and literary qualities, a particular irony for anyone having struggled through this book. However, he didn’t pay Plummer enough to make the poem any good.

The afterward is the best part of the book. In the second edition, Dexter responded to to complaints that there were no punctuation marks in it with a page of them and the instruction for the reader to salt and pepper the writing as they pleased.

The Pickle for the Knowing Ones may be short but it’s incredibly hard work. While I’d argue that Hurlothrumbo has, or at least reaches for, artistic merit, The Pickle for the Knowing Ones has none whatsoever, nor does it even try to achieve any. It is nothing more than the rantings of an illiterate man which an over-inflated sense of himself, it may as well be a Trump speech.

Email ThisBlogThis!Share to TwitterShare to FacebookShare to Pinterest
Labels: Reviews, Something Else, Something Silly, Thoughts