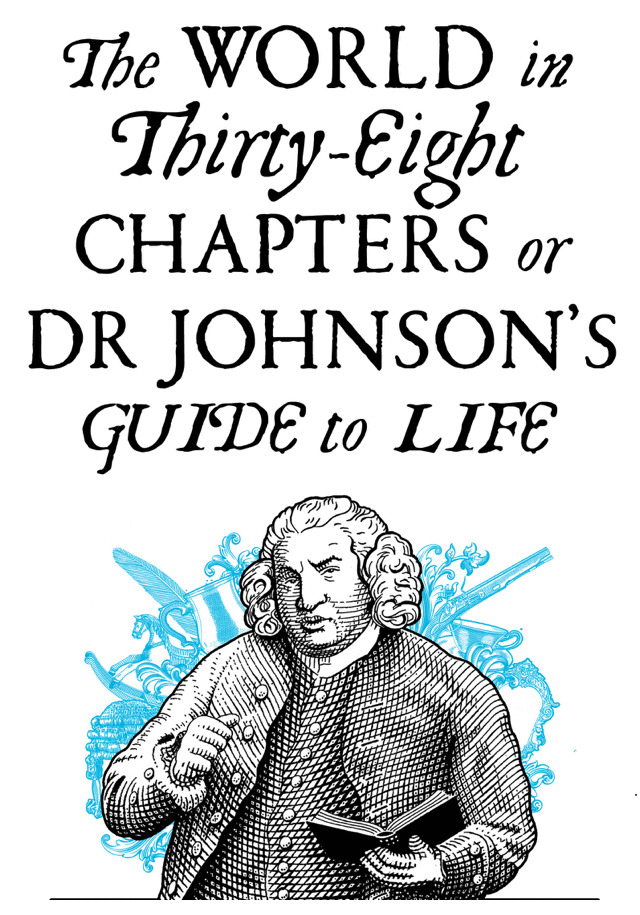 Where do you start if you want to get into Samuel Johnson? Do you begin with his own writing, with Rasselas or his poems? Perhaps you leap deep into the essays and tackle them head on, or pick away at the edges with prefaces. Maybe you collect Johnsonian quotes and work from there, though are Johnson’s quoted comments his best ones?

This is one of the discussions prompted by the Dr Johnson Reading Circle’s reading of The World in Thirty-Eight Chapters or Dr Johnson’s Guide to Life and we were joined in the discussion by the author, Henry Hitchings. It’s part biography, part self-help book which aims to argue for the importance of Samuel Johnson in the modern world and to get under Johnson’s skin while bringing him to a fuller and more rounded life.

One of the more controversial techniques of doing this in the book was to refer to the main figure as Sam. This started out as a necessity in a chapter about talking about Mr Johnsons senior (Michael) and two junior (Samuel and Nathaniel) but became one of the ways to disassociate the figure of Dr Johnson with his bold pronouncements, from the actual man. While it is true that he did refer to himself as Sam in letters and in person, there was a question as to whether it was too presumptuous to call him the diminutive without the opportunity to ask his permission. Seeing as Sam had the habit of bestowing nicknames on his friends, with Boswell becoming Bozzy, Langton becoming Lanky and Goldsmith (much to his dislike) becoming Goldy, I don’t think he would have minded all too much. Although it worked smoothly in the book, it did sometimes sound strange to hear him referred to as Sam out loud.

Samuel Johnson, when he is known of at all, figures in literature as a monument, pictured in numerous portraits as an old, surly looking grump, throwing out firm judgements with a dismissive ‘Sir’. As the book says;
“When someone calls me “Sir”, I suspect that I am about to be told off (‘Sir, get in line’ at the airport) or patronised (‘I’m afraid, sir, that this is not a public area’)”.

This caricature, created partly in his own life, partly by writers like Boswell and partly by writers since, serves to distance the public from someone warmer whose most used words were not one of certainty but words like ‘but’. When reading his writings, especially the essays in The Rambler, Adventurer and Idler, Sam is a man who weighs up ideas, whose seemingly axiomatic sayings are often part of longer and more considered sentences. Though some may have treated him like an oracle he was nothing of the sort, full of doubts and dark feelings but also possessed of an openness that let him deal with all manner of subjects from many different angles. It is true that the conclusions he did come to, he held onto firmly but everything else was fair game - he was even mocked for his incredulity for not ruling out the existence of ghosts.

Another false image of Sam the book addresses is the notion of him as (in Samuel Beckett’s words) an ‘aspermatic colossus’. Sam was a married man with sexual urges that were described by some close friends as ‘very powerful’. It’s hard to think of him as young, and descriptions of his marriage to Tetty are few and not particularly favourable but relationships are closed doors to the outside world. That Sam and Tetty seemed a mismatch to those who knew them (and more frequently to those who had never met Tetty)  is besides the point. A relationship has a real and secret life between that posterity knows nothing about, and probably has no right to know.

It’s clear from the book and from our discussion that this is a personal book for Henry Hitchings and the group shared a fondness for Sam, as a gauche youth (one of those sixth-formers), an angry young man and as an older man who never felt that he had exactly found his place in the world. It was also a personal book in the way the lessons of Sam’s life and work are constantly contextualised with the life lessons of Hitchings, always bringing the person of Sam into the world we live in.

That’s not to say that it’s a humourless book, or a heavy one. The thirty-eight chapters are short and lively and contain thoughts on facebook, the joy of friends, the mystery of relationships and the pleasure in being a little silly sometimes. We laughed a lot as we talked about the book and it felt a little like we were talking about a mutual friend, a man called Sam who was “rational but full of feeling, stern but compassionate, orthodox in many things but unenamoured of conformism.”

Sam’s writing isn’t necessarily easy, it takes a while to ease into and often could do with some context. The World in Thirty-Eight Chapters or Dr Johnson’s Guide to Life serves as a great introduction to the man and his writing but also a really good reminder of why he still deserves to be read today - also, did you know the dictionary has the word ‘duvet’ in it?