Review: The Tale of the Lady Ochikubo 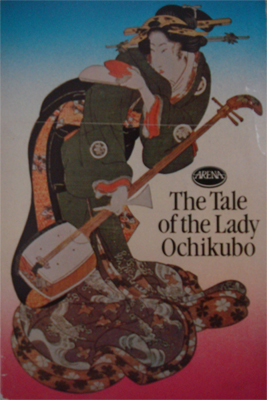 ‘The Tale of Lady Ochikubo’ is a tenth century Japanese monogatari, if the translation is fair to the source material, it’s essentially a novel. I know very little about Japanese culture nothing about Heian period, yet I have read other early novels and I found myself surprisingly at home.

There’s something about this book which is not a million miles away from late seventeenth century  or early eighteenth century literature. There is the same focus on money and prestige, the difficulty of matching money and manners, a character who has all the noble qualities and is not treated such contrasted with an ignoble character who has a high position. Japan in the tenth century was far more like modern Europe than Europe in the tenth century was - we were telling each other Beowulf and sagas of century long feuding - these people have traffic jams, conspicuous spending and snarky poems.

There was also something very like eighteenth century novels in how the central figure of Lady Ochikubo was a relatively uninteresting, blemish-free character but the characters who surround her are really interesting. Her maid was a particular delight, snarky, sassy and very in control, she was essential in improving the lady’s life with her ingenuity. I also loved the maid’s relationship with her husband, they argued, shared common jokes, teased each other and loved each other - it felt like a real relationship.

The story has equivalence in ‘Cinderella’, Lady Ochikubo is a stepdaughter who is constantly under a barrage of indignity and commands from her stepmother. She lives in a tiny room where she does everyone’s sewing but gets little to wear herself. She of course finds her prince charming and marries him - but that’s only at the midpoint. From there, her husband keeps rising in power and status, using that power to revenge himself on the family who so badly treated his one love. He gets an influential man to pull out of one marriage, engineers a fool to marry another and constantly gazumps and one-ups them at every turn. When he has done this and gained even more power, he then uses it to help the family who spurned Lady Ochikubo, find good positions for them and ultimately make them sorry they were ever horrid to her.

The best part of the book was the middle section. Where the first felt like a Eliza Haywood-esque improbable romance, the second had a more Fielding-esque feel. The little snubs and big power plays that Lady Ochikubo’s husband has with her former family are mostly satisfying and funny, making them look silly rather than any outright violence. Although the details of tenth-century Japanese life and early eighteenth-century European life were different, the values were eerily similar and made the text pretty easy to navigate.

The main difficulty in following the text came from the lack of names. Except in times of extreme emotion, most of the characters were simply not named at all, only appearing under their titles. This meant that as the characters moved up and down in the social hierarchy, their names changed and although the text tried its best to keep things straight, it still took a bit of following.

Another huge difference between this text and what I’m used to is the institution of marriage. There seems to be a ‘try-before-you-buy’ system, where the couple sleep together three times before making a decision. It also seemed that marriage was pretty easy to back out of and it was possible to have multiple wives. In some ways this lessened the tension I’m used to in early European novels, in those you can only get married once so it had better be the right one. In other ways it heightened it because it seemed very possible for a man to abandon a wife without much censure.

I was also unsure about the existence of lucky or unlucky days, years and even directions. Religion was treated as something of a joke in this text, people who were unhappy declared their intention to become nuns and religious life seemed a choice suited to old people who had nothing better to do. Add to that, the travellers on pilgrimage elbowed each other out of the way to get to the shrines and took each other’s rooms, almost coming to an all out brawl. Whereas people seemed to hold dignity very high in personal and professional life, there didn’t seem to be much in religious life.


Ultimately, I was surprised how much I enjoyed this text and how much I felt like I was following it, given my utter ignorance of the culture that produced it. It seems there are similarities in novel-producing cultures, a sense of social order and the individual’s position in it, a certain mercantile greediness and a love of the witty putdown. I might even seek out ‘The Tale of Genjii’.