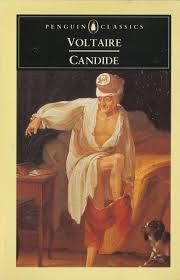 Merry Christmas everyone, I thought I’d celebrate with a special Christmassy post. Namely, the long promised, long awaited and long forgotten Candide review.
I came to Candide through Rasselas and it’s fascinating how similar the two texts are, despite how dissimilar the characters of the writers. The books are similar lengths, both deal with characters who travel around examining different modes of living and both came out within a week of the other. Both books were also written to defray costs in times of trouble. Candide was written by Voltaire to pay for his medical bills in exile, whilst Rasselas was written to pay for the funeral of Johnson’s mother.
The two writers are absolutely different though. Johnson was a devout Anglican whilst Voltaire was a freethinker who dabbled in atheism. Voltaire had been famous from youth whilst Johnson didn’t make his name until he was in his fifties. Voltaire had known riches, having played the French lottery (incidentally run by Casanova) with the help of a professional statistician whilst Johnson was arrested for debt shortly after the publication of Rasselas and had to be rescued by Samuel Richardson. Also, Voltaire seems more aware of his audience than Johnson, who resolutely writes in his own style no matter of genre.
Candide is probably the more successful work, it’s Voltaire’s most read piece, has been adapted into other media and is till quoted today. Both Rasselas and Candide have never been out of print but Voltaire’s work is more likely to be read by a general audience than Johnson’s.
It tells the story of Candide, a young man who lives a comfortable life and is tutored in Leibnizian optimism by Pangloss, who teaches that ‘all is for the best in the best of all possible worlds’. This means that everything that happens, even the bad things, are the very best thing that could possibly happen. Candide is then kicked out of his comfort and travels the world, initially interpreting things in this optimistic way, oblivious to the reality of the carnage around him. I love how Candide responds to the terrible things that happen to him with a belief that all is for the best, it is a funny refrain and Voltaire takes great pleasure in finding new horrors to befall his characters.
While I find Rasselas to be a funny book, Candide is funnier, it’s also sharper and funnier but it runs out of puff before the end of its hundred-odd pages.
Voltaire is very able to spin a grand paragraph and cut it with a bottom with great skill. There’s a great joke where an anabaptist (people who believed in adult baptism) is drowned, references to my pal Theodore, King of Corsica, trips to El Dorado, a Utopia that is so well run that everything becomes boring.
It moves fast, with thirty chapters of about five-hundred words each but in trying to find new things that happen, the book disproves itself. The big joke is that the world is not an ordered place where the best possible things happen for the right reasons but a violent disordered mess. However, to make the book readable as fiction, the characters learn and develop from their tribulations and actually (more for the need of something to happen than anything else) come back together after being separated. This means that in essence, the plot has served to make the people better and bring them together closer and stronger than they started out - meaning that in some sense everything has happened the best possible way.
It could be said that this is a comment on the novel itself, that the neat happy ending is a poke at the empty optimism implicit in the novel form. It doesn’t feel that’s the case though, it feels that Voltaire is forced into it by the form. Far better, is Johnson’s approach in Rasselas, to have ‘a conclusion in which nothing is concluded’.
Whilst Candide is a funnier book than Rasselas, the latter book has a deeper exploration of its themes. I recommend reading both, neither takes very long and both are entertaining.
So, with that Christmassy post our of way, I hope everyone has a yuletide which is the best Christmas as the best of all possible worlds.