Review: Confessions of the Fox by Jordy Rosenberg 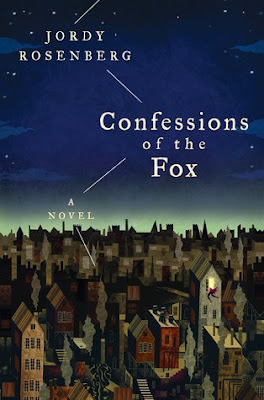 When I heard there was a queer/trans retelling of the Jack Sheppard story doing the rounds, I knew I had to check it out.

Last year there was ‘The Fatal Tree’ which tried to be a psychologically plausible retelling of the story in thieve’s cant and this year I read Ainsworth’s 1839 fantasia on the story, so I was interested in another take on the character. Before reading, I had an expectation that the central idea of the book would be that Jack’s ability to escape prison would be an analogue to the trans/queer ability to escape (or cross-over) society’s pre-set gender roles. There was some of this, but a whole lot more.

The first part of the book I looked at was the author’s acknowledgements and bibliography. He starts the bibliography with a short paragraph explaining his approach to the book and when he said that ‘London was not a white city’, I have to admit that I first thought he was talking about the buildings.

I’m not exactly tuned into the worlds of identity politics and decolonialisation theory, neither do I have a conception of eighteenth century London to be anything other than the ethnically diverse stew it has always been, it doesn’t take much reading to find all sorts of varied voices and I didn’t find the statement that ‘London was not (ethnically) white’ to be as radical as I think it was supposed to be. I was also surprised to find that the bibliography contained as many works on modern American race theory, trans theory, gender theory and such as they did works on the eighteenth century. I was ready to tackle a book with some very different interests and priorities to my own.

The book purports to be the secret true confessions of Jack Sheppard, an eighteenth century trans-man born under a name beginning with P, I imagined it as Prudence or Patience - one of those cloying virtue names. The text is annotated throughout by Dr Voth, himself a trans-man and lecturer in 18th century studies. (That the author, Jordy Rosenberg is also both these things make me wonder how much we are supposed to identify Voth with him).

There are incidences of 18th century criminal slang, especially early in the book. This is mainly to set up the joke that pretty much every colourful epithet we are introduced to can be translated as ‘pussy’. I liked the joke and I liked the tone. The gleeful quim-carousing tone of the beginning of the book, together with the gnomic glossing in the footnotes put me at ease and allowed me to relax that the book would try to be as entertaining as the bibliography suggested it would be polemical.

Although the Jack Sheppard in this is apprenticed to Kneebone the carpenter, does occasionally have a stutter and does break out of a couple of prisons - this is definitely the Ainsworth fantasia route than any retelling of Sheppard’s life. Jack in this is too busy detecting conspiracies, conducting piracy on the Thames and avoiding the closing net of a police state to really get into any of his traditional scrapes. As the book reaches a final twist, it’s clear that Sheppard and Bess exist in the main text as symbols of noble struggle and their actions have to fit the symbolism of the text more than the recorded actions of history. I didn’t really have any problem with this as it is pretty much what all writers on Sheppard have done and it was done with verve, panache and humour.

I heard a description that this book is written in an eighteenth century style, that’s nonsense, it isn’t and it doesn’t really try. The dialogue, structure and pacing are all definitely modern and Jack Sheppard says he has done something ‘on accident’, something so glaringly American that were I supposed to read it in an eighteenth century vernacular, it would have thrown me right out. The book does use ‘flash’, the thieve’s argot but it handles it very well. The language is used (as such language really is) as spice and also as a symbol of belonging. At several points in the book, flash is used as a password and a way of checking allegiance and identity.

I was also very into the story in the footnotes, of Voth, his previous relationships and his life in a dystopian hellish university where his work is being co-opted by P-quad (Pequod?) a corporation of a thousand heads. There aren’t many books where a person tells an anecdote of a girl dry-humping a toy shark, or when the editor/rival protagonist admits that he hasn’t seen his penis in ages and thinks it’s under the bed.

Most of my initial concerns about forcefully viewing eighteenth century lives through twenty-first century theories of understanding were swept away. Rosenberg is too artful, playful and confident with his material to make it as simple as reading it like that. Someone with less finesse could have made this an awkward, ranting, embarrassment of a story but the layers of fiction, metafiction and knowingness slip through the dangers and create a book which entertains and provokes.

I did have a couple of areas where I didn’t feel comfortable though. One was how much of the Jack Sheppard story could have been used but wasn’t. For a book in which Jack Sheppard is a trans-man, set free by his love for Bess and a new pleasure at his masculine identity - there could have been a lot of material in the prison escape which involved him dressing up as a woman. For the real (presumably male) Jack, there’s a certain larkiness about sneaking under a prison guard dressed as a woman, a larkiness that has been used in fiction from Mr Toad on. For a trans Jack Sheppard, there’s could be a certain regression or pain in sneaking out as a girl, a feeling of too many layers of identity. As well as this, there is the fact that Jack was a famously flashy dresser. In this book he rejects silks and flouncy things as feminine but he was living in an age where flamboyance was far more allowable in the masculine sphere and the historic Jack enjoyed his fair share of it. I’d liked to have seen a little more of that in here too.

My second gripe was the sub-plot about the police state. Throughout the course of the book, a rumoured plague gives the (extremely shadowy) authorities an excuse to flood the streets and waterways with ‘centinels’. These bully boys smash through characters houses, stop them in the street, arrest them for paltry reasons and generally show how the cis/white/privileged world police those who are not one of them.

This is a completely false depiction of early eighteenth century London and the only real case where the polemical/modern wishes of the novel go too far. The fact is that there were no police at this time. None at all. What’s more, there wouldn’t be an official police service for a hundred years because the people thought the notion to be against British freedoms. Jonathan Wild, Thief-taker General and villain of this piece, could only operate in an un-policed state and the coming of a proper police force would mean there was no space for such people. What’s more, the footnotes on policing talk about Stonewall riots and American prison surgery, London’s police were introduced in civilian uniforms with purposefully restricted firepower. When early London police got into a shoot-out in Sidney Street in 1911, they had to call the army for back-up. The reason those figures are called ‘centinels’ in this, is because there is no word to call them because they never existed.

My final problem with the book is that it actively tells me that it is not written for me. A number of times the footnotes appeal to an ‘us’ who will get the work. At another point it is explicitly says that as well as being a book for queers, it’s only for those queers who have suffered and lost all. Now, I have something of a queer identity but the queerness of this identity lies more in how little weight I give to gender and sexuality within myself, those are not the muscles that pump my inner heart. This book is explicitly for those who put those two notions front and centre, so I felt a little left out at times. It reminded me of how exclusive these inclusive identities often are. I was also a little upset by the notion that ‘all white people look like serial killers’ until I thought about the assumptions people have made (and some still make) about ‘all black people’. Then my jolt of dismay got me thinking (and feeling) so was probably the point.


All in all, I thought this book was both a compelling novel in itself and also an interesting look through some different lenses. The different elements are mixed in well and Rosenberg pulls off a difficult task. Still prefer Ainsworth’s version though.