I went to a number of smaller museums and exhibitions recently and I thought I’d look at them.

Teeth - at the Wellcome Collection 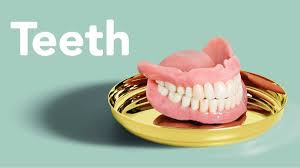 The Wellcome Collection is quickly becoming my one of my favourite repeat visits. The permanent ‘Medicine Man’ exhibit shows all sorts of fascinating things from Wellcome’s collection; including chastity belts, healing voodoo dolls and a selection of ancient Japanese priapus. Past special exhibits have included a great one on sex (where I saw Victorian fetish photos and got to sit in an orgone accumulator) and one about man’s interaction with animals (which included fascinating examples of how taxidermists arranged animals as they thought they should be rather than are).

Teeth wasn’t as good as those, but was still good fun nonetheless. Laid out in broadly chronological order, the overall tale being told was one of improvement in the dentist industry and that we’ve never had it so good. A frenchman named Pierre Fauchard was the first ‘dentiste’ and literally wrote the book. He was a big step up from former toothpullers, like Le Grand Thomas ‘the terror of the jaw’ who would physically pick people up by their mangled tooth and shake it out of them.

Among other things, I saw a skull of a women who has dead people’s ‘Waterloo Teeth’ wired into her jaw. A number of dentures and prostheses, including Burke’s, which included a large front section to make up for a possible cleft palate.

I saw egg-whisk style hand crank tooth drills, clockwork varieties, foot peddled and the eventual electric variety. There were also clockwork toothbrushes, chewing sticks and Napoleon’s toothbrush. Did you know that the modern toothbrush was invented by an eighteenth century Englishman? In 1770, William Addis (inspired by a broom) developed the idea for a toothbrush while he was spending time in Newgate prison for his part in a riot.

I also learned that St Apollonia is the patron saint of dentists because her death involved toe-curling examples of Roman dental torture.

A small exhibition but a fascinating one, though one that will have you tonguing your teeth in alarm. 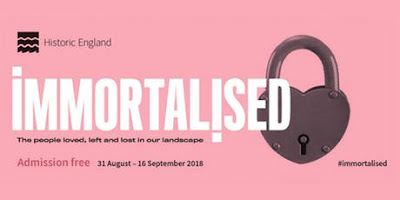 Part exhibition, part art installation, ‘Immortalised’ seeks to ask questions about how we as a community (especially a nation) remember people and events, and how our relationship to those things change with time. it’s housed in an old fire-engine fixing station, just behind the Thames near Lambeth Palace.

Each area in the space has a large wooden cutout of a memorial, proceeded by hanging sheets with the same shape cut out of it and mini speakers weaved into it that play songs, interviews, poems and speeches. Attached to these wooden cutouts are objects, analyses and descriptions. Some of these objects were interesting; the Lutine bell from Lloyds, the maquette for the Millicent Fawcett statue and the roundel saying ‘Gareth Southgate’ that was fixed to Southgate Station during the World Cup.

The questions raised by the exhibition were interesting. They asked why we memorialise certain people and how the memorials of past people are seen today.

One of the most emotive and provoking elements discussed was the history of the slave trade. This took two prongs. The first, active prong, is a statue dedicated to remembering the slave - as there are no statues for them. It features a large round platform featuring slaves chained together, an old slave woman, an Olaudah Equiano and a former slave holding up a chain. The voice playing overhead stated that the statue will exist ‘to raise awareness’ - a phrase that needs to die. People are aware of the slave trade, it's not awareness that needs to be raised, it's empathy. It also said that the statue would help Africans and those of African descent to be proud, though the focus of the statue is on the chains rather than the freedom.

More interestingly, were the different ways in which the people of Bristol have interacted with the person of Edward Colson. He was a rich businessman who founded many cultural and charitable institutions of the city and was given a large statue to celebrate him. However, Colson earned his money by being one of the key lynchpins of the Atlantic slave trade and so responsible for some of the biggest atrocities of the modern age. The people of Bristol (in general) do not wish to delete their history but do need to respond to it. Suggestions have ranged from changing the plaque on the statue, to re-situate the statue in a square built in the shape of a slave ship with paving slabs representing the tiny spaces slaves were kept in. Currently he wears a red, woollen ball and chain.  I was delighted by these creative ways to react to history instead of destroying it.

This was a very interesting and thought-provoking exhibition, which was exactly what it was supposed to be.

Kept in the same building as ‘Immortalised’, it’s a museum seeking a home.

The museum told the story of seven moments in the history of migration to Britain. These moments were beautifully varied; from the expulsion of the Jews, the coming of the Huguenots, Windrush and modern discussion of Syrian refugees. Each of these themes are addressed in a few objects and many, many first-person accounts. This is a museum of voices, sometimes too many voices, but a thoughtful, and at times joyful, look at migration in Britain.

I really look forward to the time when this museum becomes a large and settled place and l will certainly visit it and discuss it in more depth. 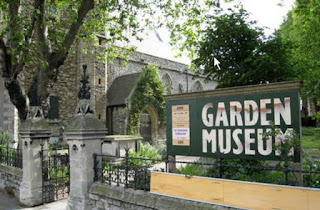 On the way to the Immigration Museum and Immortalised exhibition, I happened to pass a little church near Lambeth Palace. This little church is home to the Garden Museum. It was made into a museum in order to save the church. It’s internet famous due to one of its objects being voted ‘the most boring artefact in any British Museum’ - this object, an orange jumper worn by Alan Tichmarsh on the Gardener’s World TV show.

It’s not worth that derision though, the Garden Museum is interesting in its own right. Where else will you see a cucumber straightener or a collection of terrifying gnomes? Nor would I have ever seen a Vauxhall Gardens season medallion, as designed by William Hogarth. I also saw a book on flowers from 1593, pictures of botany by James Sowerby and a book that Repton used to present his vision of gardens to prospective customers. Having recently finished John Brewer’s ‘The Pleasures of the Imagination’, I related those items to what I had read and got more out of them than I would have. I also learnt that the first named gardener in Britain was named Edmund and was paid the exorbitant sum of two and a half pence a day.

Although I didn’t get ten pounds worth of interest out of the museum, I have never owned a garden or been interested in gardens. If you are, it’s likely you’ll get a lot out of it.

The museum is also worth visiting as a church. Buried there are some very interesting people; Elias Ashmole, the Lichfield native whose collection formed the Ashmolean in Oxford, John Foreman, the doctor who was the basis of the Casebooks Project and Botanists Sowerby and the Tradescants. Even if you don’t want to visit the museum, I recommend peeking into the porch and seeing one of my favourite headstones of all time. 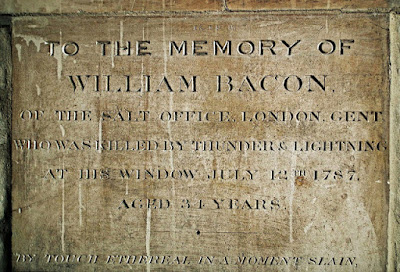 London has some wonderful big museums and exhibitions but I recommend checking out the smaller ones to.