Review: Pleasures of the Imagination by John Brewer 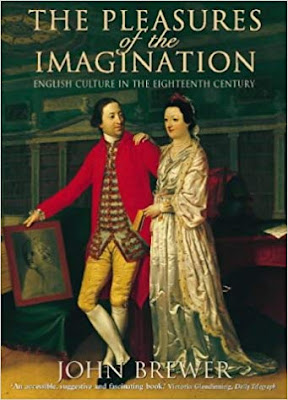 John Brewer’s ‘The Pleasures of the Imagination’ might be described as a portable book, if you have a tough rucksack and a strong back. It’s a heavy work, not in tone, the writing is bright and easy to read but physically - you need a table for this one.

Broadly, the book tells the story of how the modern notions and systems of culture developed in the eighteenth century. These battles were broadly between professional practitioners of the given art verses the gentleman amateurs who developed most of the initial theory. There was a form of repetition in the book, each art follows the same broad conflict but how that conflict plays out in each arena brings new light to the assumptions of culture we have today.

It starts in the seventeenth century, with the restoration of the throne after the Commonwealth. The new court wanted to be as lavish as previous ones but didn’t have the funds to do so. There wasn’t money to build a proper, modern court nor to hold the sumptuous plays and masques of other courts and so entered into something like public-private investment. Court-City collaborations moved further into the City as monarch’s like Queen Anne, or the early Georges did not have much interest in culture. As George II was reported to have said, ‘I hate poetry and painting’. This move helped the growth of City professionals, whose idea and values of culture clashed with the Court… and that’s much the rest of the book.

The story of writing was the one I knew most about. Following accidental loosening of censorship laws, print-shops grew like mushrooms. Supplying these print-shops were a loose collection of writers for money we know as Grub Street. As these people developed in skill and confidence, they started to create genuine masterpieces and theories of their own. The summit of these authors is of course, Samuel Johnson, who declared only ‘blockheads’ don’t write for money and created masterpieces of criticism and literature. The other side of this is best shown by the Scriblerans, who consider these new writers to be a plague and that the only true thinkers on writing are those Gentlemen who have no vested financial interest in it.

This battle is even clearer in the case of visual art. In Britain, artists were craftsmen who created decorations and portraits for families - art theorists at the time were dismayed at the English love of portraits, its selfie culture. ‘Real’ art came from the continent in the form of classical sculpture and dingy old masters. Where people like Hogarth wanted to aggressively forge an English culture of painting, celebrating the specific as much as general human themes. He tried his hardest but ultimately couldn’t achieve his wishes alone. For most of the century, the gentleman connoisseurs had the upper hand, with the money and connections to drive the art market but with the establishment of the Royal Society, the balance starts to shift. The society allows a respectable communion of practitioners and they start to portray the connoisseurs as lustful and greedy, hoarding beauty for themselves and ogling it. By the end of the century, the art world is still driven by an elite (as it is now) but an elite of practitioner/theorists rather than aloof gentlemen.

Theatre had the hardest reputation to overcome. In the mixing on classes; the very act of a communal group of people agreeing to deceive each other and the precarious state of acting itself, it was very easy to present the stage as immoral. I found the description of the audience’s interaction with the stage particularly interesting. The audience were part of the show, performing themselves in front of their peers, calling out and adding topical jokes and interpretations which were uncensorable and booing and hissing when the play went places they didn’t like. It reminded me of a comparison I made between an English football match and a baseball game I went in New York. At the baseball, there was a large screen and the crowd cheered and chanted when the screen wanted, and even used the words from the screen (in this case, “Go, Mets, Go”). In football, the chants and songs are generated by the spectators, often with topical, rude and funny words, being caught from one group of supporters to the next. This is how I imagine I night at an eighteenth century London theatre. I was also surprised that this level of interaction was regarded as particularly English and visitors from Germany and France were surprised by it.

The key element that changed this relationship between stage and stalls is, in my opinion, the development in theatre technology. As the century progressed, theatres grew larger. Newer theatres were double, even triple their earlier counterparts. As they grew larger, the feeling of the theatre as one whole organism became harder to sustain. I noticed how, when the Globe was newer, the audiences were far louder. Nowadays, the Globe is an institution in itself and audiences watch the plays quietly. Another change in theatres is the development of theatrical lighting. As the stage became lighter and the house darker, then the cues to be quieter and watch more intently become clearer.

The other problem the theatre had to overcome was the reputation of actors. People like David Garrick and Sarah Siddons had to be careful to make sure their home lives were as straight as possible. Garrick also had shares in newspapers so he could spin public opinion in the theatre’s favour. He also developed a narrow repertory, with a heavy emphasis on safe comedy and prestigious Shakespeare. As the book-trade pushed Shakespeare as the national poet, so Garrick hooked his own fame to Shakespeare’s translating the role of theatre from common delusion to safeguard of the nation’s culture.

The second half of the book moves out of London to see how these changes in the Capital grew beyond it.

Thomas Bewick, the Newcastle wood-engraver shows his success coming from the eighteenth century fondness for self-improving clubs. Bewick was a member of many such clubs . A proud Northerner, he created his works himself, using provincial book-selling networks to distribute them. Although loved for his ‘simple’ qualities, he actually has very clear didactic goals with engravings and stories inspired by the ideals of those groups..

The example of John Marsh shows how music was sustained in smaller towns. Music is more expensive then other art forms, needing expensive instruments and tuition. Without a monied figure organising and gathering musicians, no music could happen. Particularly it took someone of private means to connect musicians to audience and a strict code to maintain the social balances.  I particularly found it interesting that players of brass instruments were the hardest to obtain, as the mouth-shapes made by brass players was seen as ludicrous, meaning only members of the military commonly played them. Without someone to organise music, it didn’t happen until the later foundation of professional town orchestras.

The last example given was of Anna Seward. From her safe seat in Lichfield, she propagated the voice of the gentle amateur, defending an open, free and emotional reaction to poetry. In her frequent spats with, and about, Johnson because he stood so solid and as such a figure of professional, aggressive. masculine taste. She was able to hold such a position of influence because of the London magazines and the development of the postal service, letting voices be heard that they hadn’t been before.

I found this book to be extremely clear and persuasive. I also found that the struggles in the book represent those we meet with today, where the internet allows voices to be heard from more corners of the globe. Be it gamer-gate, or the use of Facebook to influence elections are the new struggles to define culture. In the eighteenth century, the power shifted from an elite circle of rich gentlemen to an elite circle of practitioners. What will be the result of our own culture wars?