Trip: ‘James Cook: The Voyages’ at the British Library 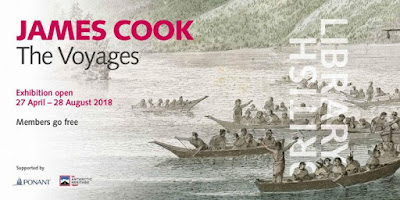 I have a habit of getting to exhibitions late. When it comes to ‘James Cook: The Voyages’ at the British Library, I got there on the last day. I’m going to review it anyway, if just to work out my reaction to it - because it was complicated.

On the surface, it seems straightforward. First, gather materials from Cook’s three voyages; maps, logs, diaries, paintings and a few material items from Oceanic cultures. Then use them to present these voyages to the public, along with a through-story that questions and analyses the purposes for the voyages and their impact. The difficulty is that the materials and the through-story told different things.

I shall look at the materials and how they were arranged first because there was a lot of thought put into the physical space. After an introduction to Cook as a person, the viewer was led into a mock-up of an eighteenth century cabinet of curiosities. This area is ‘London’ and from here, the viewer goes on the first voyage.

Apart from the sometimes awkward physical angles, I liked this idea. I enjoyed the pattern of voyage and reflection, and following the narrative of each voyage as each progressed. It was clever and interesting, and the ‘London’ parts made explicit the impact of London culture on the voyages themselves.

In the first part, the cabinet of curiosities included books that presented the enlightenment wish to describe and catalogue the world, from an extensive encyclopaedia to (Bank’s own) copy of Linnaeus. This meant that, in the subsequent voyage, the maps, pictures and documents were understandable from this need to collect and organise.

Those documents, particularly the pictures, were a fascinating glimpse into the minds of Banks and the scientific team. Even more interesting was how, on Tahiti, Banks developed a relationship with the people of Tahiti, particular Tupaia, a navigator and priest of Oro. It showed what started as scientific interest, recording the cultures of people with the same attitude they took with plants and flowers and how this attitude became one of friendship and cultural exchange.

There was then a video where modern Tahitians discussed Tupaia, some saying they were proud of him for his skills and adventurous spirit, others calling him a traitor for leaving the island.

This friendship and understanding were shown in the way Cook’s map of Tahiti was created with native names, compared with Samuel Wallis’ map, calling the island ‘King George’s Island’. It is further developed by the fascinating pictures drawn by Tupaia and then, after he joined the crew, his map of his knowledge of the seas and islands of the Pacific. What may have started as observer and subject definitely grew into conversation of equals.

The maps of New Zealand and parts of Australia don’t show the same interest in place-names and do show Cook ‘naming’ those places. Also, there was a number of descriptions of violent encounters with people, often with Tupaia smoothing the process. One of these violent encounters involved a surgeon called Monkhouse shooting a Māori called Te Rakau. Interestingly, while Cook’s account named him, Monkhouse’s places it in the passive voice and avoids his guilt.

By the end of the first voyage, the visitor had been presented with a journey that had the principal aim of mapping the transit of Venus in the Southern Hemisphere and a further brief to boldy go where no European had gone before and meet new cultures - with a particular emphasis on good relationship. What’s more, the evidence presented showed a development of pure scientific observing become warm human exchange and co-operation with the occasional misunderstanding, that was usually patched up.

What’s more, the second voyage showed the same thing. Cook meeting new people, delving as far into Antarctica as any European ship had ever done (confirming the reports of the Pacific people that beyond was ‘a white land’) and flogging any member of the crew who stole or injured a native - something that didn’t happen to Monkhouse (though that was probably because of his profession as a surgeon not a sailor.) The pictures from these voyages were stunning and, like the ones from the first voyage show an appreciation for the cultures they encountered.

The third voyage had a more explicit commercial tone (find the northwest passage and asses the possibility of fur trading) but the materials showed Cook engaging even more in local cultures. In Hawaii, he took part in ceremonies where he went shirtless, which seemed demeaning to his crew, but he did it anyway. He bemoans the strain and pressure that European contact might have with the Pacific cultures and seems very aware of the possible impact.

At no point do the materials present him as a Columbus or a Cortez, there is no talk of slavery or even settlement. But, to provide context, there were frequent screens and the wrap-up videos at the end of the exhibition which were the only sound in the room. These videos were mainly interviews with modern representatives of the cultures Cook encountered and they presented him as a coloniser. This was my disconnect.

In the part where Cook’s death is presented, it says that he was killed in a fight on a beach when he went to kidnap the leader, Kalaniʻōpuʻu. ,in order to swap him for the return of a longboat. It described this manoeuvre as ‘typical’ yet we hadn’t encountered it anywhere else in the exhibition. The whole affair raises lots of questions; why was the longboat stolen? Why did Cook have a 'typical' tactic to resolve this? Why was that tactic as extreme as kidnapping kings? None of these elements had really come into the rest of the exhibition and it all came out of nowhere. Perhaps some explanation of how this radical tactic had become ‘typical’ and the thinking behind it may have set up Cook’s coloniser credentials more completely.

But as the exhibition stood, the material evidence (mostly of British creation) presented the voyages as full of wonder and openness, whereas the all-pervasive analysis and context videos presented the voyages as acts of aggression. While the eventual impact of Cook’s Voyages are of vital importance, they are not exactly part of the story of the voyages and I think more needed to be done to tie these elements together.