Until last week, the last time I had gone to the National Science Museum was when I was eight years old. Although I am inclined towards smaller museums, I have revisited the Natural History Museum a number of times and the V&A has become a go-to for me. 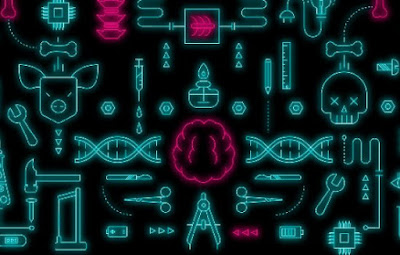 My main reason for never going back was that my main memory of the museum was being underwhelmed and my sister (then three) having the mother of all tantrums. It was a real case of facing one’s fears when I agreed to help take a group of nearly sixty, six and seven year-olds to the museum. We moved between the Wonderlab and other hands-on areas of the museum and the children loved it - I began to realise there was something interesting in-between the touchy/handy bits.

So, when I had a free day, I went to see what those interesting things were and…

…Wow! The National Science Museum has one of the strongest collections most poorly presented of any museum I have ever seen. 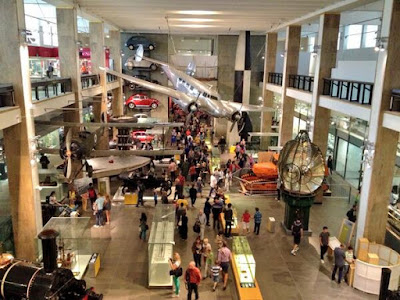 I went on a Saturday afternoon and the museum was full of buggies and small children. They toddled and waddled up the aisles, they pointed at the big spaceships and the old choo-choo trains. For some reason, they ignored the little wooden box, the blob of mould or the plastic pot, they wobbled right past them, despite the fact these objects changed the world.

To be fair, it wasn’t only the pre-schoolers that went straight past these epoch changing objects, adults also steamed past them to look at the bigger, flashier objects. Not one person (for the three hours I was there) looked - and that can’t be the fault of the visitors but the fault of the museum.

In the ‘Making of the Modern World’ gallery, there is a row of low cases with benches attached running directly down the centre of the room. Almost every object in these cases was a completely unique artefact of scientific history. Included within were; Watt’s model condenser, original Davy’s safety lamps, Jenner’s cowpox swabs, 1st telegraph machine, a first edition Lumière Brother’s cinematograph, the incubator of the first test tube babies, a sample of Fleming’s original penicillin - and so much more. A whole museum could be formed around what were simply being used as benches.

This particular gallery is an utter treasure trove. Having recently read Pandaemonium, a lot of the industrial revolution ‘stuff’ had meaning to me. I was delighted to see Puffing Billy and Stephenson’s Rocket - especially livened (if that’s the right word) by the fact that it ran over an MP on it’s first official run.

I’m currently reading Richard Holme’s The Age of Wonder which has two fascinating chapters on brother and sister Astronomical A-Team, William and Caroline Herschel. Tucked in a corner of the gallery were a specula from their forty-foot telescope, which discovered moons of Saturn. next to that was a polisher for these giant mirrors and next to that, one of Caroline Herschel’s comet-hunter telescopes. I had just finished a chapter about her on the train and it was a delight to see this tool which was also a symbol of her (shaky) independence and her lasting scientific impact.

To go into other objects that people walked past might be redundant, but I was amazed to see people nonchalantly stroll past Crick and Watson’s DNA model, Babbage difference engines and Julius, an early computer that generated the odds in greyhound racing.

The problem with the museum, which I think is best exemplified in the ‘Making of the Modern World’ gallery, is that without proper presentation, they are just objects. A viewer has to know the significance of the object to have a reaction to it and the museum does not do enough to put those objects into context. All the museum gives is a short paragraph in a small font - and that's when there isn’t someone sitting on it.

Another problem with that gallery (and the museum in general) is that it is impossible to follow the room chronologically without zigzagging across the room - a pattern of movement the cases in the room impedes. The room almost encourages the visitor to run through it, glancing quickly around and having a brief feeling of wonder as they are pumped towards the cafe and imax cinema.

I also feel the museum doesn’t do enough to advertise to a potentially more appreciative audience. All Science Museum advertisement on the tube focus on the Wonderlab, the (admittedly good fun) interactive area for children - but the museum is probably best enjoyed by adults. Almost every item in that building is priceless and there are hours and hours worth of rational entertainment in it, if you can get around the buggies.

As well as my afternoon in the Science Museum (and I haven’t even mentioned all the Watt & Boulton stuff - as read about in Jenny Uglow’s The Lunar Men) I also went to an event. 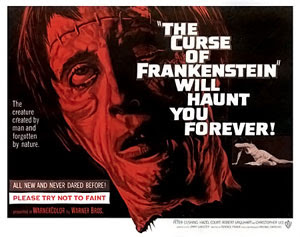 To celebrate 200 years of the publication of Mary Shelley’s Frankenstein: or the Modern Prometheus I went to a showing of the 1957 Hammer Horror The Curse of Frankenstein on imax followed by a brief session with Sir Chistopher Frayling and Kathryn Harkup.

Although it didn’t really need the imax presentation, for eight pounds, it was fun to sit and watch Peter Cushing and Christopher Lee have at it in front of an audience. There was also something ticklish in seeing Kensington gore in South Kensington. It’s a good film, the audience had fun.

The discussion was interesting in how it flagged up how unsuccessful the novel was. Of five-hundred copies published by a very downmarket publisher, there were still some left three years later. It was the presentation of Frankenstein on the stage that brought the story fame. The verbal creature from the book grunts on stage, the comic assistant comes in and Frankenstein himself grew crazier and crazier.

It was fascinating hearing how Victor is neither a bad man or scientist, and the book is not anti-science.

Although not a long Q&A, it was an interesting one - and I found out that Percy Shelley once tried to reanimate a dead cat.