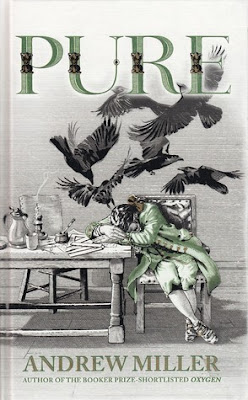 I picked this book up back when it was making headlines as a Costa winner. I read the opening sentence, ‘A young man, young but not very young, sits in an anteroom somewhere, some wing or other, in the Palace of Versailles.’ It’s a sentence that greatly annoys me. Why is the narrator so slippery with the details, so vague? I threw down the book with frustration and didn’t pick it up for several years.

However, having read Ingenious Pain (and less so Casanova) I was comforted to realise that Andrew Miller is a skilled and confident writer. This is a wonderfully written book but that initial vagueness spreads over the whole story. There’s enough in the writing to let you know something is going on but not enough to let you know what.

It tells the story of Jean-Baptiste Barrette, an engineer who is tasked with removing a cemetery that is fouling the centre of Paris. He must mine deep into the ground for old corpses and have them transported, and in doing so, he comes of age.

In the course of the work, he must build a team and a method to achieve the huge and disgusting feat. He must struggle against the priest who is about to lose his church, the daughter of the house he is lodging in and the opinion of the people. He is aided by the church organist - who is part of the coming revolution. There is also the incident with the gravedigger’s daughter and the man in charge of the army of engineers.

One of the most pleasurable parts of the book is the camaraderie of the engineers and diggers, there is the feeling of a huge and accepting family that feels warm and lets the reader into it. (I also enjoyed the priest throwing missals as missiles - that made me smile).

This a book of many conflicting duos. It pits the living against the dead, the rational against the irrational, the mind against the body and the past against the future. To make Paris pure, Barrette must battle with the past and deal with those literal skeletons in Paris’s closet. But Barrette is not completely convinced of his task, he has an awkward standing in ‘the party of the future’. The year is 1785 and that future, as mixed in blood as progress, is just around the corner.

All these big, conflicting ideas make it seem that something is definitely occurring, that the clearing of the cemetery has a definite meaning beyond itself, but it is so busy contrasting those ideas that it never quite makes it clear what it is.

In the beginning of the book there is a description of an elephant, which is purposefully set up as a metaphor. The elephant lives on fine brandy and frightened the palace dogs, before they got used to it and attacked the elephant which had to be put into seclusion. At the end, the elephant is dead. Again - this may be a metaphor, but a metaphor for what? Is it the behemoth of the state - about to be attacked by the dogs of san-culottes? Is it the fear of death and desecration, that the gravediggers overcome? It’s not sure.

I had a little read of the removal of Les Innocents graveyard, what surprised me most was an element of the genuine removal that I think would have made a brilliant metaphor for purity out of decay. The engineers and diggers had a side business in collecting the congealed fat from the rotting corpses and turning it into soap - like in Fight Club. What more compelling and strange  image can there be then that?

Again, this was a very well written book, extremely nippy and enjoyable as I read it and introducing me to a fascinating piece of history and some well realised and interesting characters. Yet, like Casanova, there was something ultimately dissatisfying about a book that hinted it was about more then it said. By all means pick up Andrew Miller, but beware, it will haunt you with meanings that aren’t quite there.