Review: The Sufferings/Sorrows of Young Werther 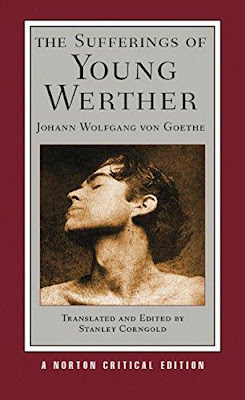 [I read the Corngold translation, which uses the word ‘sufferings’ rather than ‘sorrows’. I found it an easy to read, an unobtrusive translation with useful notes and appendices.] 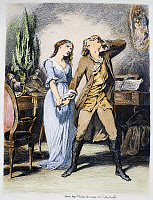 I was trying to write this review in the style of an alt-right numbnuts, something along the line of; ’special-snowflake and general over-emotional cuck shoots himself’ but I couldn’t get the hang of the language and tone and I think it would have become tiring very quickly.
My imaginary alt-right reviewer does have a point though, Young Werther is a particularly irritating blend of ego and fragility that makes him difficult company. He frequently talks about his own exceptional nature; how he feels deeper than other people, how he appreciates the natural world more than most, how he might be derided as a drunkard or a madman but that was always the fate of special people in this cruel world.

He declares at the beginning that he is too happy to make art and as he gets sadder he seeks out thunder-storms, crags and other sublime places to mooch. He marvels at his own notions and thoughts, even if they are as hackneyed as the notion that life sometimes feels like a dream. What’s more, he actively dislikes most other people, deriding them as ordinary, boring and conformist. He’s the kind of person who would nowadays refer to other people as ‘sheeple’.
In other words, he’s a twat.
And yet…
Compare him to the similarly emotional character of Harley from Henry Mackenzie’s ‘Man of Feeling’. Harley is also very emotional but he frequently poured his soul (and his unending vat of tears) in pity for someone else. Harley eventually dies of self-pity but for most of the book, he is driven by a too-deep involvement in everyone else whereas Werther only has a deep involvement in himself. Werther is nastier, bitchier and constantly drawing everything back to his own specialness - essentially he’s me at university.

I’m sure he is many people at university, no wonder this took off with young people. Werther may be a twat but it’s a twattishness many of us have shared, and hopefully grown out of. He’s light years ahead of Harley when it comes to being relatable.
I find comparing ‘The Sufferings/Sorrows of Young Werther’ and ‘The Man of Feeling’ interesting. Mackenzie wrote his novel first, creating a sensitive, emotional man whose story is revealed by scrips and scraps saved by an editor who had been using it for gun-wadding. Goethe also wrote his novel using the frame device of an editor, most of the book being told in scraps of letters Werther writes (but never any of the replies) and a last section where the editor has been asking witnesses to put the story together. In the first book, the frame serves to distance us from the main story but the editor of Werther brings it to plausible life. It makes it more real.
Similarly, the plot. Harley spends most of his adventure collecting examples of other people’s problems in order to  exercise his sentiments on before he is turned down by his love, shrinks away and dies. Whereas, Werther meets Lotte and instantly starts obsessing even though he knows she is taken.

He tries to be a useful person but he feels like a phoney and finds himself back in Lotte’s town where she is now married. When he kisses her and she finally tells him that it’s enough; he methodically settles his debts, writes a letter designed to make Lotte feel guilty, dresses in an outfit with emotional significance and then shoots himself. No fading away for Werther, he dies in a passive-aggressive orgy of ‘I bet you’ll be sad when I’m dead’. This is not a sentimental novel like ‘The Man of Feeling’, it’s sturm und drang, storm and stress - there’s blood as well as tears.
What I find remarkable about Werther’s suicide is the clinical detail the editor goes into. We learn that he shot himself whilst sitting down, that someone had heard the noise and seen the flash but dismissed it and that he was found bleeding the next morning, with a bit of his brain hanging out. Werther is still alive, twitching and paralysed for several hours before dying. It’s horrific - and it’s all true.
The details of Werther’s suicide. From the witness of the noise; his position when he shot himself, the lengthy and slow death, even what books were on the table were all from a letter Goethe received describing the suicide of his friend Jerusalem. Almost all of the details, including the yellow waistcoat and blue frockcoat ensemble that was to become the de-facto uniform of young late-eighteenth century men, were taken from the real incident. This means Goethe would later seed the outfit into the novel so that Werther could wear what his friend wore and for a reason.
Even more remarkable is that the letter about the suicide was given to Werther by his friend, Johann Christian Kestner, a man who had a young wife called Lotte, who Goethe was in love with. The core love story of the book is also basically true. Werther (Goethe) fell in love with Lotte (Lotte) who married Albert (Kestner) - although, in real life, the three managed to become a tight friendship unit. Goethe even met Lotte when he was taking someone else to a ball, just as Werther met his Lotte. Lotte even had dark eyes like her fictional counterpart.
The main thing Goethe did when writing the book was link his love for Lotte and his friend’s suicide and supply suitable histrionics to link the two.
Which is where we go back to the beginning of the review - Werther may be a twat but he is a real twat, because he is essentially young Goethe. It feels true because so much in the book was true, and it resonated so well with dispossessed eighteenth-century young people because it managed to be utterly real and grounded while it still reaches up to grasp the beauty and the danger of the sublime. Werther’s love is both ludicrous and magnificent, his sufferings both ego-centric idiocy and intensely painful and his suicide is both glorious and sordid. It is sentimental stretched to the sublime.
I found the book a memorable experience, but like the sand that Lotte kept slipping into her letters, not without irritation.