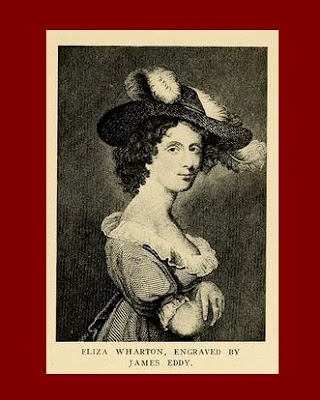 I don’t think we’ve ever focused our attention over the pond before, but this is a (late) eighteenth century novel written in the newly formed United States of America. Written by Hannah Webster Foster, an early journalist for Boston papers who wrote two novels; this and ‘The Boarding School’ (which is not dissimilar to Sarah Fielding’s ‘The Governess’). She was not revealed to be the author of ‘The Coquette’ until after her death. The subject matter was a little… sensitive.
The novel tells the story of Eliza Wharton, a young woman who dallies with a young man, runs away to have the child stillborn in a far away tavern before dying herself - so far, so Richardson - but the novel was heavily based on a real woman, and one Hannah Webster Foster knew. It’s hard to know if the anonymity was for using the death of an acquaintance for novel-fodder, or if it’s because the novel is sympathetic to her.
We start with a bang. Her fiancé has died and Eliza is delighted. It was dull tending his sickbed and he wasn’t really her choice but her parents. Now she can have a bit of fun before she settles down.
She goes to the house of her happily married cousin, Mrs RIchman. There she meets the Reverend Boyer and Major Sandford - and here we have the conflict for the first half of the book. Boyer is a nice, respectable man who will probably prove to be a good husband, but he’s a little staid. Sandford is a charming swaggerer who entertains “a poor solitary being, who needs some amusement beyond what I can supply myself.” The two men try and out-compete for Eliza in their own manners.
At first she finds the boys fighting over her as a bit of a chore. She includes a humblebrag that could almost be said Count D’Elmont in ‘Love in Excess’, “These bewitching charms of mine have a tendency to keep my mind in a state of perturbation.” Though, in a world where the slightest mis-step in communication between the sexes can cause real problems, I suppose it is a genuine problem to have bewitching charms.
As the novel progresses, it seems very clear that Bowyer would be steady and kind. He expresses his respect for Eliza and his fondness for her. It’s also clear that he doesn’t really know her nor listen to her. He is surprised at her jollyness when in jolly company, finding her smiling and mild flirting to be unseemly. Although Eliza’s friends and family all like him, and he isn’t a terrible person, I really grew to dislike him for his arrogance and smugness.
Sandford on the other hand is a cad of the Lovelace school. He is looking around for a quick shag or a rich fortune but Eliza is too careful for the first and too poor for the second. However, as the book goes on, it does seem like he loves her, or at the very least thinks he loves her despite not listening to her. Although I couldn’t like him, he at least had passion for Eliza, and if it wasn’t for the need for money, he could have grown a decent man.
And this for me is what made the first half of the book such entertaining reading. Eliza has a simply crap choice. The book is called ‘The Coquette’ and as much as she scolds herself for her coquettish tendencies she never actually seems to have any. Eliza is a pretty straight shooter, she tells both men that she wants a time away from relationships and that she just wants to laugh and have fun for a bit before settling down - but neither man listens to her. It’s so frustrating. Bowyer is not prepared to wait for her or join in with the fun, and Sandford is always trying to dive into her genitals.
The first half, with letters from Eliza, Bowyer and Sandford to their respective friends is enormously entertaining. Webster-Foster is very good at retelling the same events from different perspectives in ways that are both interesting and revealing. She also does a brilliant job of showing Eliza’s innate reasonableness and how grossly all of her intentions are misunderstood and misrepresented by the two dense men in her life.
In the second half, Bowyer goes off with disgust at her enjoying Sandford’s company and Sandford gets married to a decent, pleasant and rich woman who he feels very sorry for cheating on. It is revealed that Eliza has run away, pregnant with Sandford’s baby and she dies after giving birth to a stillborn child as the real woman did.
The second half doesn’t work as well. Eliza spends the last third of the book in abject fits of melancholy and the tone of the book starts to turn and blame her for her misfortunes. Also, the Eliza of the first half of the book was fun-loving but sensible and the transition into someone who would get pregnant with Sandford’s baby behind his new wife’s back is simply not shown.
That said, this is an engaging book which presents a really interesting character in Eliza, who is a free-spirit that nobody listens to or takes all that seriously who rubs against and finally is destroyed by the rigidness of her society.
Also - it contains the Holy Grail of Epistolary fiction, a letter that actually reads like a letter someone might send someone else and for that, it’s worth a few hours of anyone’s time.