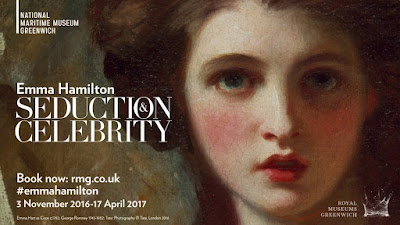 As a child, I went to two exhibitions at the National Maritime Museums in Greenwich that changed my life a little. The first was 1992’s ‘Pirates: Fact or Fiction’ that launched me into a lifelong obsession with the salt-soaked ne’er-do-wells and the legends and myths that have grown around them. 1994’s ‘Wreck of the Titanic’ was the first big exhibition of recovered artefacts, and I was quite driven by Titanic-Mania until the 1997 film shook me out of it.
Last year I went to the ‘Pepys: Fire and Revolution’ exhibit, which was interesting but a little weak-sauce considering that my Pepys-fancying was really some way gone then - and last week, I went to see ‘Emma Hamilton: Seduction & Celebrity’. If you are reading this before the 17th of April, can go an see it and haven’t - do.
I was a little aware of her story outside of Nelson but this exhibition told it so well, supported by a wealth of pictures and letters that brought me through on a surprisingly emotional journey.
We start in London in the late 1770s and the 13 year old Emy Lyon is a servant to a musical family. By the time she is 15, she is out on the streets - possibly lodging with bawd Mrs Kelly and possibly working with Quack, William Humphrey in his Temple of Health with the renowned ‘Celestial Bed’. This section is amply illustrated with cartoons, a beautifully detailed painting of Covent Garden, the semi naked picture of Lydia by Matthew William Peters (with come-to-bed-eyes) and a copy of the Harris’ List of Covent Garden Ladies.
Emma was taken up by one keeper, until she became pregnant and was passed over to another. To avoid destitution she had to give her baby up, change her name to Emma Hart and live a sober and chaste life. In this room there are her account books and some letters and we get the first sounds of her voice. This is also the Romney room. 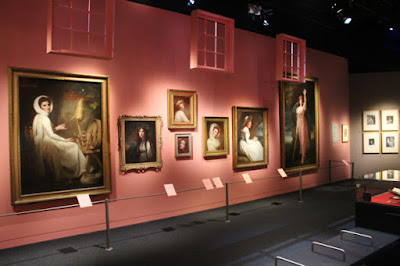 While under the protection of Greville, she sat for a portrait with Romney. He was quite taken. The room is full of pictures of Emma. I overheard another visitor commenting that he’d never seen so many pictures of one person in the same room. The effect is striking. Both artist and model work together to create images that are warm, expressive and very alluring. I was a little taken myself.
Then Greville had to marry and Emma was passed to his widowed uncle Hamilton, who lived in Naples. He described her in a letter as his ‘delightful object’. Having grown attached to Greville, she was deeply unhappy and felt very betrayed but her move to Naples is the beginning of a golden era.
Because Emma was not an idiot, she may have been uneducated but she proved a that she had an unsurpassed appetite for learning - gaining French as well as the correct Italian dialect - she also studied the classics, Hamilton’s great interest, and the two of them studied the finds coming out of Herculaneum and Pompeii with delight. It wasn’t long before Hamilton was praising her for her knowledge as well as her beauty.
In this time she created her ‘Attitudes’, a series of poses and postures inspired by classical and biblical art. These poses were then transitioned by graceful movements of her shawl, those movements accentuated by her loose dress. Where she had been a model to be painted, now she brought those paintings into a kind of living sculpture - it was a big hit. As well as lots of different drawings and descriptions of the postures, there is a projected performance based on them. It’s a eerie experience watching.
Emma married and became Lady Hamilton, projecting her into orbit of the Queen of Naples (and sister of Marie Antoinette). Her friendship with the Queen, her easy command of languages and her careful treatment of people meant that Emma had great influence in the court. So much so, that she arranged Nelson’s fitting out there and organised the celebrations when he returned from the Nile. When the French attacked, it was Emma who organised the Royal flight on Nelson’s ships. She also sent those ships to bring food to Malta and was the first woman to gain the cross of Malta in the process. She was also involved in the brutal repercussions against the French when they gained control of Naples again.
By this time, she had fallen for Nelson but also with Hamilton and when the three came back to England, it was this scandal that followed her home, rather than triumph.  She set up a home in ‘Paradise Merton’ for her and Nelson, as well as Horatia, the daughter that neither could publicly acknowledge as theirs. This part of the exhibition has a lovely set of letters that Emma and Nelson wrote to each other as he was at sea for two years. She writes him poems and he writes phrases like, ‘I have been the world around and never saw your equal’.
Scandal floated around them, a comic picture has Nelson boasting that he could put ‘such a broadside’ into her - but Emma concentrated on making a comfortable house that boasted of their joint achievements. The china was full of victories and there was a bit of French warship by the front door. People still flocked to her, she had Princes and the Prince Regent round for tea (though Nelson warned Emma to watch out for ol’Prinny).
Emma’s downfall started with Nelson’s death. Hours beforehand, he wrote a codicil to his will (displayed in the exhibition) pleading to the country who’s fight he was to fight, that they look after Emma. We are also shown his ponytail, cut off on his deathbed and given to her. The government was very happy to give Nelson’s brother and estranged wife a pension but they were never going to give anything to a mistress.
Emma tried to keep in society but that cost money and soon she had to sell Paradise Merton and treasured keepsakes of Nelson and her successes until she was thrown into the King’s Bench prison - they have her entry ‘Dame Emma Hamilton’ in the log book.
Broken and bitter, she fled to Calais and died aged 49 of amoebic dysentery. 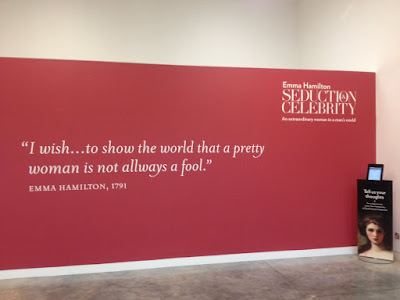 And that’s the story. Emma managed to gain herself an education, carve out an artistic identity, negotiate in world-level politics and in all ways excel as much as she could - but she was a woman and that left her on shaky foundations that were eventually to topple her.
It is a wonderful exhibition and a great story (and if you can’t go, the book that goes with the exhibition is a gorgeous thing - full of glorious pictures). 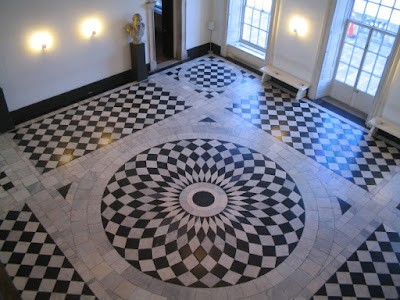 …On a side note, I also went to the Queen’s House in Greenwich. It’s a beautiful building, created by Inigo Jones with classical form in mind, has a perfectly cubed hallway and a stunning set of stairs. Now it’s mainly being used as a gallery. Not much that grabbed me except the latter portrait of fat Pepys and a Hogarth I’d not seen before that features Trump the pug wearing a gentleman’s wig. It’s free though, and I recommend you go just to see that hallway. 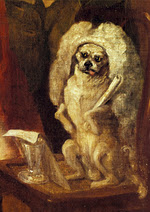