I’ve read a number of books from a series published in the 20’s and republished in the 60s and focussing on various niche aspects of eighteenth century literary culture. The ones I have read were ‘The True Genius of Oliver Goldsmith’; ‘Passionate Intelligence’, ‘The Grub Street Journal’, ‘Clubs of Augustan London’ and ‘Tom Brown of Facetious Memory’, which I have all reviewed before.

They are all brilliant books in their own way. They are meticulous, detail-orientated and tending towards the dry. I was rather put off by some of their tones, especially the Tom Brown book’s tone of a wearied headmaster. This one takes a whole different and far more enjoyable approach. Curll has a distinctly bad reputation and although Strauss will not paint him white, he presents him as a lovable rogue. 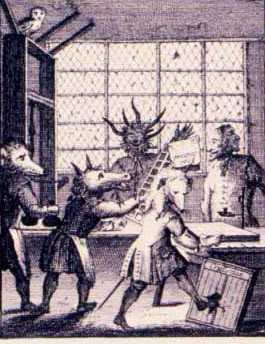 (Curll is the 2-headed man on the far right - this is the only portrait of him - I'm guessing it's not totally realistic.)

The ‘Unspeakable’ Curll was a Bookseller in the first half of the Eighteenth Century. He became notorious in his lifetime for a catalogue that included titillating compilations of divorce court proceedings and French novels about half undressed nuns.

He was most famous for his ability to spin books out of nothing, particularly biographies. One of his particular tricks was to put an advert in the papers staking a claim in someone’s biography and appealing to readers to send letters and memories to refine the book. The book would then be hastily cobbled out of the letters received and any material about the subject that was in public domain - and their will. He was also adept at writing intriguing title pages, and would re-brand a book with a new title for adding the teensiest of extra material.

Curll also had the reputation, as many eighteenth century booksellers did, of keeping stable of cheap writers who he used to churn out product. While this was true, it also seems clear that Curll was friends with his writers and nursed one through his final illness. (Possibly unlike Newbery, who forced his into penury and locked Christopher Smart in a madhouse - if you believe that interpretation).

Curll was the subject of a hate campaign by all respectable writers, especially the Scriblerans, Pope in particular. Pope’s first sally against Curll was to feed him a vomiting drug in retribution for obtaining some old poems of his and publishing them.

Pope’s second attack was in The Dunciad, where Curll was represented as one of the booksellers taking part in the dunce olympics and swimming through liquid sewage. The last tangle between Pope and Curll was a weird and complex plot where Pope tried to use Curll to surreptitiously release some more of his letters. Although Curll is the one with a bad rep, it’s Pope who comes across as something of an arsehole.

Curll also faced other problems, spending a year in and out of prison for obscenity charges and being stripped and spanked by Westminster schoolboys (as was his son). He also gets involved in the usual Grub Street wars of words.

As Curll is presented as a loveable rogue, so is Strauss the writer. Near the beginning, when introducing him, Strauss admits that he couldn’t be bothered to find out about Curll’s ancestors. Strauss is prone to imagining Curll, supposing that he was fond of his own voice, fond of a laugh, and meticulous in detail, from very little evidence. Near the end he decides that his book was not a ‘proper biography’, though I would disagree.

Finally, I usually judge a biography by seeing whether I am sad when the subject dies. Curll’s death made me laugh, being told to us in the aside of, ‘he died, by the way’. The last sentence in the book is, ‘One day, I must look for his grave.’ One day, I might also.

Incidentally, I have a Curll publication, one of those terrible lives. It's pretty spread thin.