(I think this review is cursed, my computer has ‘pazowwed’ twice when writing this.) 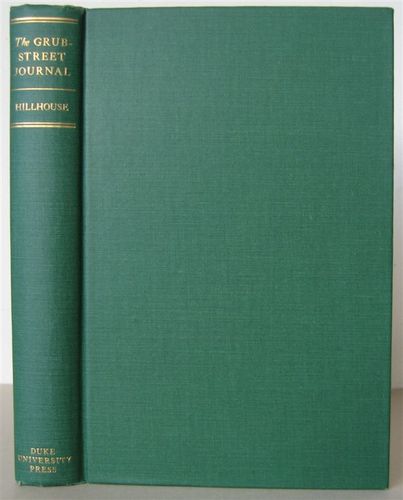 A Copy of the Journal, doesn't look like much...but not a bad read.

I was originally disappointed when I received my copy of ‘The Grub Street Journal’. I was expecting a collection of eighteenth century magazines written by members of the much maligned assortment of hack writers located in and around Grub Street. Instead I received a book about a magazine, which had written as if by hack writers in and around Grub Street, but actually written, partly at the instigation of Alexander Pope as a continuation of The Dunciad.

James Hillhouse explains that he was originally intending to publish the Journal itself, but seven years of popular and consistent publication, there is too much to publish. His second thought was edited highlights of the Journal but this highlighted a problem that would have also affected a full collection. The business of the Grub Street Journal, was to pick entertaining squabbles with other newspapers and get squabbling away. For this reason, it’s hard to simply publish it, as it is principally understood in its relation with other publications of the time. This is what this book’s about, and as such, it is very entertaining.
The first chapter is the driest, but essential to understand the rest. It details how the Journal was developed to pick literary fights on behalf of Pope and other Scribelarians and how it grew it’s own legs under it’s editor ‘Bavius’, a mask worn by a few people but most often a sharp-witted, non-juring vicar called, Richard Russell. It then provided popular entertainment, by picking fights, some literary, others medical and some religious.
The book then takes us through different categories of argument and dispute the journal involved itself in and gives examples of each. The disputes take rather similar forms, even the most abstract arguments descend into ad-hominem attacks and the Journal often finds itself using parody and fake letters from the other side, making it look stupid. They have a particular fondness of attacking other papers, I like the constant refrain of rival paper, The Register as, ‘an obscure little paper’, it seems such a modern way of niggling other publications.

Another running joke I enjoyed were the constant digs at Colley Cibber. I have a real fondness for Mr Cibber (last mentioned in my review of ‘Midnight Mirage’, but also got a mention in ‘Joseph Andrews’). The actor-manager, so popular in comic roles, unexpectedly made poet laureate to be ridiculed at least twice a year when publishing his New Year and Royal odes. The Journal had followed the contest throughout, ridiculing the possible candidates but mostly ignoring Cibber, he being such an outside possibility. When he got the role, they were ready with an epigram or two. For example;
But guessing who would have the luck
To be the birthday fibber
I thought of Dennis, Theobold, Duck
But never dreamt of Cibber
(Incidentally, during the contest, Bavius banned waterfoul puns for Mr Duck as they were being inundated with them).
Or this comment;
Court fools and poets once illustrious lived:
With different titles graced distinct they shone:
But both are now so scarce; ‘tis well contrived
To join a poet and a fool in one.
Every time one of his execrable odes was released, the Journal would look at it in it’s most mock-serious manner and tear it apart. There were frequent niggles at his plays as at his poetry.

Colley also seems to have provided the age with a phrase used in lots of contexts, much as we would use a famous quote from a film... such as, when chopping too much veg for a curry and putting it in a pan, I remarked that we ‘needed a bigger boat’). The phrase, which I have now incorporated into my own idiolect is something Colley was reported to have said to an actress who had particularly slayed an audience one night that she had, ‘outdone your usual outdoings’. In works throughout the ‘30s, people were described as ‘outdoing their outdoings’ for many different spheres of activity. Of course, Cibber himself often outdid his outdoings as a poet.

Another regular feature was the news roundup. This was more than a mere digest of news, but also a comment on the poor newsgathering techniques of the other papers. It took conflicting reports of the same event, compared them and often a comment by Bavius/Russell. These comments are often of an acid and sardonic nature that pushes (and occasionally crosses into) cruel. Occasionally the reports were written in a rhyme form, something that seems shockingly flippant and rather amusing, for example the fairly famous;
“Yesterday, a poor woman, who I suppose got up to ride,
Fell out of a dust-cart, and immediately died.”

There are many arguments, but the one that most gripped me was the tale of their longest running feud with the quack, Joshua Ward. Ward peddled some pills and drops, supposed to be a panacea for all ills and ended up killing many people, especially the weak. The Journal opened up its pages to anyone wishing to report deaths and crippling from the pills. The pills were based on genuine 18th century medical practice of purging the body of sickness, but they worked too well, purging the body for days and days until the victim purged themselves to death. The campaign was pretty successful, and Ward had to tour the North and keep out of London.
In all, I enjoyed this book and I feel I know, or have access to knowledge about every aspect of The Grub Street Journal that I could ever want. And that’s something to be pleased about.