Review: The Beaux Stratagem at the National 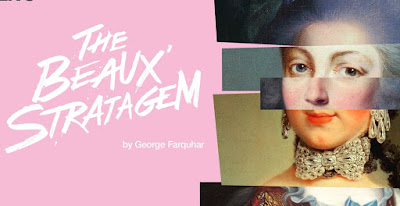 I have an intermittent tradition of going to see a play around my birthday. A few years ago I saw The Beggar’s Opera in the Regent’s Park Outdoor Theatre, this time I went to see The Beaux Stratagem at The National.

It’s a Restoration comedy written by George Farquhar in 1707 and was adapted by Patrick Marber. It’s about two men who are on the run from blowing all their money in London and hole up in an inn in Lichfield. (The one I stayed at in Easter). While there, one pretends to be master and the other servant. They hit upon Dorinda, the younger daughter of the lady Bountiful. She also has a son, Mr Sullen, who lives at the home with his wife. The two are equally unhappily married.

The one playing the master courts Dorinda and the other Mrs Sullen, the unhappy wife. While this is happening, some highwaymen at the inn plan to rob the Bountiful residence. Meanwhile, a French prisoner of war, Count Bellair, is using the Irish/Swiss priest to try and woo Mrs Sullen also.

All these plots come together, with the con-men defending the family from the robbers; and alls well that ends well, ending with a happy marriage, and more unconventionally, an equally happy divorce.

Farquhar died before this was presented on stage, so he had little to lose, allowing him to write some pretty brave things about the nobility of divorce, much of which he cribbed off Milton’s writing on the subject. It makes the play a little off kilter, Mrs Sullen having such noble and persuasive language in the middle of what is mostly fun and silliness. 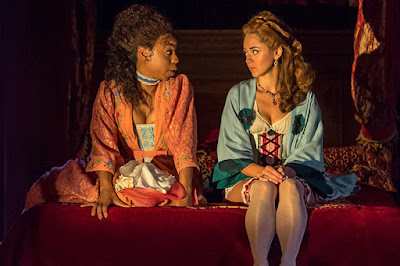 Susannah Fielding played it very well. She had a sparkle in her eyes and I was lucky enough to be seated close enough to see it. It seemed clear that she was a fun and lively person, only brought to fits of despair after spending a bit of time with her husband. At the beginning of the second half, she addressed the audience direct, getting some cheers and support. I liked her a lot.

I also felt sorry for Mr Sullen at the end. He was a man who just wanted to be left alone to nurse his hangover with a dram and a venison pasty, he couldn’t be doing with any of the other characters.

Of the two rogues, I preferred, Archer, the one pretending to be the servant the most, payed by Geoffrey Streatfield. He warmed into the part very well, a swaggering, bold man who was not afraid to give Mrs Sullen some atrocious chat up lines. The part was originally written for Farquhar’s friend, so was a little stronger for that. He also had a stupid song about trifle to sing.

The other, Aimwell,  was a very slight, feminine man, who when he was sword fighting the robbers at the end was dressed, and looked exactly like, Guybrush Threepwood. I have to admit, this broke my concentration near the end. 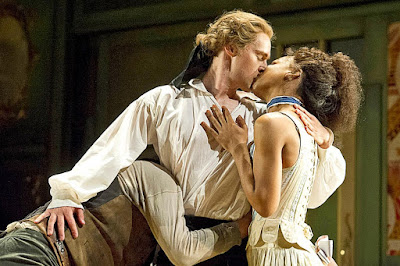 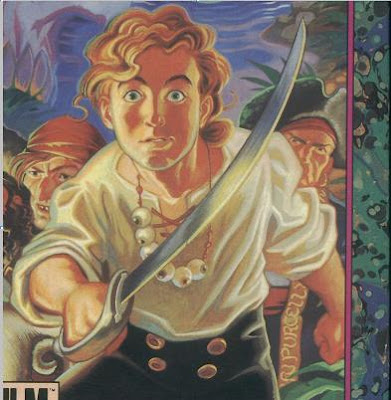 Aimwell in The Beaux Stratagem

My favourite character was the servant Scrub, played by Pierce Quigley, who I’ve seen before as a brilliant Bottom at the Globe. He gave his character a proper Lichfield/Midlandy accent and delivered all his lines with such deadpan dourness, that almost every line brought a laugh. 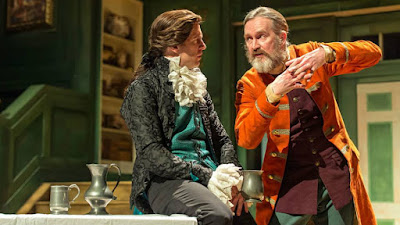 There were also a lot of good songs in the play, these often raised a laugh, when one of the musicians would appear at the top of the multi-story set and, in the case of Streatfield’s character, goading him into singing a song he didn’t want to. Also very funny, was the accordionist in beret, red scarf and stripy scarf who appeared before the French count sang.

All in all, I laughed a lot. It’s not a particularly clever play. The lines do not sing with Goldsmith’s fine honed wit, or the anarchy of The Beggar’s Opera but it’s good fun, there’s singing, swordfighting, bad chat up lines and all sorts of good stuff. So I’d recommend it as a night out.