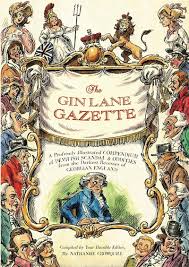 Last time I talked about subscription and a book I helped crowdfund called the Gin Lane Gazette. It was written by Adrian Teal, a political cartoonist who also worked on Spitting Image and a number of newspapers.

He was funding the book through Unbound, one of the new crowdfunding publishing outlets that are starting up to fill the gaps in the popular market. Adrian Teal is a very entertaining presence on Twitter and I was very keen to sign up. When the pre-order time was over and the book successfully funded, I waited a few months and was extremely excited to receive my copy of the Gin Lane Gazette (lucky copy number 13) and read it straight through, and have dipped into it many time since.

It takes the form of a compendium of articles from an imaginary magazine published between 1750-1800 under the watchful and increasingly jaded eyes of Nathaniel Crowquill. 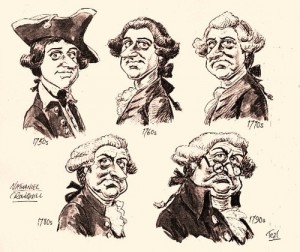 The jokes are frequently brilliant, from the in-your-face bawdy to the subtle. My favourite subtle joke takes place on the title page. The compendium was published by ‘A Cully’, a name that mixes both the notion of a cully; defined by ‘The Dictionary of the Canting Crew‘  defines as ‘a man that is easily drawn in and Cheated by Whores or Rogues’ but it also plays with the name of Edmund Curll - the ultimate Dunce publisher.

Sort of like a grown-up Horrible Histories (in the best possible way) the book is absolutely crammed with as many fascinating anecdotes and stories from the latter half of the eighteenth century, liberally loaded with brilliantly observed caricature. Johnson turns up a number of times, William Beckford and loads of Charles Fox. The level of detail is brilliant. The text makes extensive use of the long s, the costuming and style of the characters change as the years go on. A Cartoon about Johnson's review of Hanway.

What I most enjoy is the running soap throughout the book, just behind the text is the life of Nathaniel Crowquill, his frequently drunk etcher, his spy on the ground and all the other people who help create the magazine. This ties everything together and makes it more than a selection of fragments and hints at an almost lovely muppet show element that I love.

Of course the Gin Lane Gazette is about intriguing the reader and making them laugh, it’s not the place to look in any depth at the stories within it but to enjoy them and maybe go off and find the sources of the stories. There is a bibliography at the back to do this.

It is now available of all good bookshops and indeed, it is possible to tell if it is a good bookshop if it has some copies. Put it on your shelves between TH White's 'Age of Scandal' and Vic Gatrell's 'City of Laughter'.

Check Adrian Teal out on www.tealcartoons.com