I will be seeing ‘A Dish of Tea with Samuel Johnson’ at the Arts Theatre on Sunday and so am having a little look at previous fictional representations of Sammy J. I’ve found four.

Blackadder: Ink and Incapabilty - Ben Elton and Richard Curtis 1987
As most people’s first (and only) introduction to Samuel Johnson, Blackadder has a lot of responsibility in shaping people’s ideas of the man. Of course it’s all nonsense. We have Samuel Johnson (played by a bluff Robbie Coltrane) offering patronage to a book that was not his to sell, but booksellers; we have him offering that patronage to the Prince Regent who was not yet born, we also have him hanging out with romantic poets who see him as a God, which is also nonsense - but that’s not really the point is it? The question is, can they use the idea of Samuel Johnson to create problems for Blackadder and humour for the audience and the answer is, yes they can.
The character of Johnson in this, is one of a large, violent angry man with a very high opinion of himself and a show-off use of vocabulary. He is used against Blackadder as a physical threat, a rare intellectual equal and a possible publisher of Blackadder’s novel ‘Edmund - a Butler’s Tale’. We are left feeling a sense of pleasure and oneupmanship when Baldrick accidently reveals to Johnson that he forgot to include the word sausage in his dictionary, (a word that he did include and is defined as, ‘n.s A roll or ball made commonly from pork or veal, and sometimes of beef, minced very small, with salt and spice; sometimes it is stuffed in the guts of fouls, and sometimes only rolled in flower.’).
It would be a shame if this really was all anybody heard of Johnson, as this vain shouty man is so removed from the self-doubting, multi-faceted, eternally human and humane person that Johnson seems to be.

Screenplay: Boswell and Johnson’s Tour of the Western Isles - John Byrne 1993
Robbie Coltrane gets another chance to give us his Johnson in this edition of a series of one off dramas called ‘Screenplay’. The performance does have it’s base in the Blackadder performance but is much more shaded and subtle, as would be expected. Coltrane’s use of Johnson’s Staffordshire accent is brought out a little more and he gives Johnson much more of the thoughtful,  amused and amusing man he could be - as well as some shouty histrionics. It is also fair to say that Coltrane really looks the part, despite his youth at the time, stoutly marching his way through the Hebridean countryside.
What is a pity though, is the script. When a writer has such rich source material as Boswell’s ‘Journal of a Tour to the Hebrides’, why not use any of it? Instead we have Johnson and Boswell comically pratfalling around the country, accompanied by a comical black servant with a thick Scottish accent (the fact that he is black has relevance later on).
Johnson was not Johnson in this piece. He didn’t have any of those quirks and twitches that made him so fascinating to Boswell, his grumpiness was not Johnson’s brand of deep seated grumpiness and his jokes were not Johnson’s brand of humour. There is a wonderful bit in the book where Johnson laughs to himself, over what seems like a very small thing but he finds it hilarious - welcoming other people in with his laugh. Also, this is not Johnson in other ways, for example; there is a scene with Johnson playing the piano which is not only highly unlikely considering his ambivalence/dislike of music but he also plays in a honky-tonk style. More importantly, when one of his hosts is revealed to own a slave, he only raises an eyebrow. Johnson was a hugely outspoken man, not afraid to argue for what he believed in (and also to argue for what he didn’t believe in) so he wouldn’t have hidden from an argument about slavery. This is a man who toasted the next slave rebellion and gave the majority of his wealth to an ex-slave he had raised almost as a son, he would not have merely raised an eyebrow.
This slave is later bought and rescued by the comical black servant, who whites up for the part. Indeed, this character is given most of the good lines and most of the spotlight and although he was an pleasingly roguish type of character, he swallowed Johnson and Boswell.
Then there was the presentation of Boswell. Now, I am not a Boswell fan (not after the bit in the London Diary where he dresses up as a poor man and gets a crowd onside to allow him to rape a prostitute) but I still find him an interesting man and wanted to see that. However, John Sessions doesn’t really get the chance to show Boswell’s manipulation of conversation to get Johnson to say things, nor does it get that name-dropping quality or the hunger and desperation I see in Boswell. All it allowed him to do was blunder around and fall for women. Now, John Sessions made this an interesting character to watch (I adored him as Dr Prunesquallor in BBC’s version of Gormanghast)  but it is not Boswell.
However, there were some very nice parts to this programme, especially when Johnson is asked about the meaning of life and gives the different answers he would have given throughout his life - although I was waiting for a ‘fills the vacuities of life’ type thing that never came.
We also got to see Ian Dury in a dramatic role, and I love a bit of Dury. He plays a lovely old man who is delighted since the day his wife died, and who is an atheist - and Samuel Johnson still doesn’t argue with him.
This programme seems like such a wasted opportunity, it left me very unsatisfied. Samuel Johnson has a line when using a phrasebook to speak Erse, ‘what is the use of books Mr Boswell, then to help us through this vale of tears?’ - too true, and in this case, read the book.


England, England - Julian Barnes 1998
This is not a novel about Samuel Johnson, it’s about a businessman who buys the Isle of Wight and turns it into a distilled version of every tourist’s vision of Britain. It's a bit like Epcot, but bigger. Unfortunately, the book never quite lives up to the fascinating concept but there is a very good section where everything goes out of control in a Jurassic Park manner, but instead of dinosaurs, it’s people from Britain’s mythology and past. Among them is Samuel Johnson. A man has been hired to play Johnson for a ‘Cheshire Cheese’ dining experience where visitors to the island can enjoy a night of lively wit and repartee with Johnson, Boswell and Joshua Reynolds (but no Goldsmith, why no Goldsmith?) but the company has been receiving complaints that he is moody, rude and eats to fast - rather like Johnson himself then.
The joke is, that whoever the actor was, has been subsumed by the persona of Samuel Johnson. The Johnson is not very well written, Barnes just uses appropriate quotes for all of his dialogue and larding the text with as many Johnsonian quirks as possible, an Epcot Johnson for an Epcot Britain. However, what is interesting is the effect that the fake-Johnson has on the real CEO. She reflects on how lightweight and pretend she feels against this person, who is little more than a ghost of Johnson. How solid and wise he seems compared to her. I found it a fascinating idea the complete authenticity of a man born 200 years before the existentialists adopted the phrase for their own purposes survived into a facsimile copy.

According to Queeney - Beryl Bainbridge 2001
This is a fictionalised account of Samuel Johnson’s relationship with Hester Thrale and borrows very heavily from contemporary sources, especially Thrale’s own diary, Thraliana. Indeed, there are a lot of facts in this book, and over half the conversations are ones that happened at the time.
What Beryl Bainbridge does is take all the original material and use a roving omniscient narrator to give new angles to the scene, usually close ups instead of the original text’s habitual use of a long shot. This is done with such skill and grace that the reader forgets the fictional element of what they are reading and it feels as if they are sitting in the room alongside Johnson, Hester and the rest. Although this is done very well, I wonder what the point of it is.  Most of what she is doing in the books can be performed by a good reader reading the original accounts. I suppose I find the original cutlets nice enough without the need for extra sauce.
I can see this novel having more impact before biographies used a greater range of sources on Johnson, including Thraliana and before Ian McIntyre’s extensive and engagingly written biography of Hester Thrale. (Though I’d love someone to publish a modern edition of Thraliana that is not over a hundred quid). 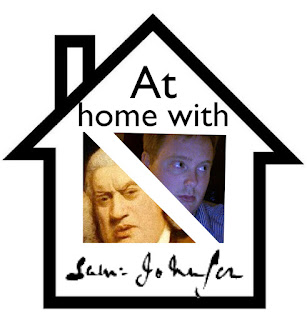 At Home With Samuel Johnson - Adam Stevenson 2011
I’ll admit it, although I love the concept for this writing and have so many wonderful ideas and places to put Samuel Johnson and hear his opinions, he is so distinctive, so unique, that I find the challenge of writing Johnson close to impossible. Well done to those who have tried I suppose.