Mostly cribbed, in true Goldsmith style, from a book by Ralph Wardle, the last major biography of Goldsmith.


Oliver ‘Nolly’ Goldsmith was born in Ireland, the son of a moderately comfortable vicar who was better at giving money away than gaining it. The family managed to scrape enough cash together to get through Trinity College and, despite some hiccoughs, managed to get a Bachelor of the Arts. It was his real wish to travel though, and he first went to Scotland, nominally to study medecine, but really as an excuse to enjoy himself. Then he went to university in Holland, before travelling several years around Europe, making money by pawning his clothes, gambling, playing his flute and arguing in colleges for cash. Somewhere around the way he also passed his medical qualifications, making him Dr Goldsmith - a genuine medical practitioner.

When he came to London he set himself up as a doctor but could not obtain many clients who could actually pay. His thick Irish accent, ugly looks and general blundering demeanour did not encourage people to put much faith in him. He supplemented his lack of money with essays and articles for London periodicals which were flourishing at the time, for a brief while he was even a stand in headmaster at a school in Peckham, but although there were fond memories of him as a person, he did not inspire much respect.
The fact is that Oliver Goldsmith loved a joke and did not take the world all that seriously, but he did take himself seriously and this combination often lead to bizarre and absurd incidents. He was generous but jealous, he couldn’t stand the idea of other people doing better then him and boasted how he could do better - whether that be riding a horse or writing a play. He would then prove he could do better and fall flat on his face, sometimes literally. He claimed once that he could vault over a pool of water, it’s no surprise to anyone when he ended up wet.
He was going to ship out to the coast of India and as a goodbye to London he wrote ‘An inquiry into the present state of polite learning’, where he argued the importance of writing from experience rather than books, to aspire to be original rather than derivative and to aim for ease and simplicity of expression rather than to lard a work up with awkward and difficult phrases and expressions. Before he went to India, news came that it had been occupied by France he was stuck in England and stuck as a writer.
First he started his own periodical ‘The Bee’, which he almost single handedly wrote for eight editions before it was packed up due to the combination of hard work and little reward. He wrote for many magazines and periodicals, and had a regular space in ‘The Ledger’, where he wrote as a Chinese philosopher Lien Chi who had just arrived in London. This format allowed Goldsmith to write lots of varying articles, many of them satirical jabs at modern London, but also essays about general morality, aesthetics and politics. Lien Chi, and so Goldsmith emerges from the letters as a tolerant, amused and interested observer of human life and the letters were extremely popular and later gathered into a book, ‘The Citizen of the World’. It was the success of this that later had him introduced to Samuel Johnson.


There is a story that Goldsmith was deep in debt to his landlady and she was calling the bailiffs. Goldsmith sent for Johnson who sent some money but also came around. The two of them then went through Goldsmith’s papers to see if there was anything worth selling. They came across ‘The Vicar of Wakefield’ a short novel and that was sent and paid for, the money defraying the rent expenses. The book was not published for some time after, and when it was did only moderate business. However, it became one of the most read books in the century after his death and has not been out of print since. Goldsmith is far right in the blue coat
Goldsmith’s lack of skill with money was legendary, when he worked at the school, the matron looked after his money as much as the boys. When he had it, he splashed out, was generous to anyone that knocked and loved to buy expensive and lurid clothes. There is a story from later in his life where he was showing off his coat and bragging that the tailor had asked him to tell everyone who made it if they asked, his friends said that they would take the name, but as a warning not to go to so colourblind a tailor. This fondness for bright and unusual clothing didn’t help his image as a clown very much. 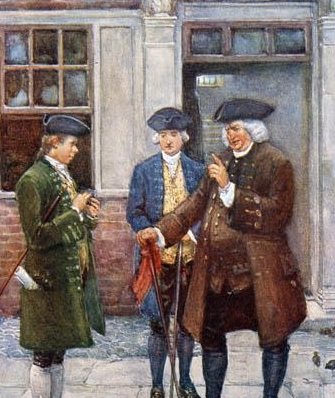 Goldmith (Left) and Johnson (Right) - Probably Boswell in the middle
He was taken in by the publisher, Newbery (whom the Newbery children’s award in named after). Newbery looked after, lodged and fed Goldsmith in his house in the outskirts of London in return for Goldsmith’s writing. Goldsmith wrote a lot of hackwork but also wrote ‘The Traveller’, a poem that made his name.
From then his career was made, he wrote another long poem, ‘the Deserted Village’ but was especially prized by booksellers for his work as a compiler. Throughout his early essays he would go to the French encyclopédie and translate the words and put them into his own, but he was also commisioned to write large digests of works where he would read a number of experts on a subject and manage to turn that into exciting, simple and emminently readable prose. He became a top selling spreader of knowledge and his books on Roman, Greek and British history were school textbooks until the middle of the next century.
Later in his life he also wrote plays, making it his mission to write what he called ‘laughing comedies’ as opposed to the mannered ‘sentimental comedies’ in fashion. The first ‘The Goodnatured Man’ came out to a satisfactory run but it was his second ‘She Stoops to Conquer’ that was the riskiest. The director was not a fan of the play and did not buy new sets or costumes, the better actors in the troupe refused to play the piece and everything was expected to be a huge failure. Imagine the surprise when it went down extremely well and is one of very few eighteenth century plays still performed today.

Goldsmith's Memorial in Poet's Corner, Westminster Abbey (best picture I could do, sorry.)

All the hard work and worry got to Goldsmith, who was as always deep in debt, he caught a fever and died suddenly. Johnson wrote his epitaph where he praises Goldsmith’s ability to turn his hand to many styles and ornament them all but it was a spoken comment that provides a more fitting epitaph... “Let not his frailties be remembered; he was a very great man.”

NEXT: A more personal look at why I love Goldsmith.