In my official writeup of the Dr Johnson Reading Society’s trip to Bath, I said that after the tour there was the choice to go to No.1 Royal Crescent or the Herschel Museum of Astronomy but, having been to both relatively recently, I went on my own adventure 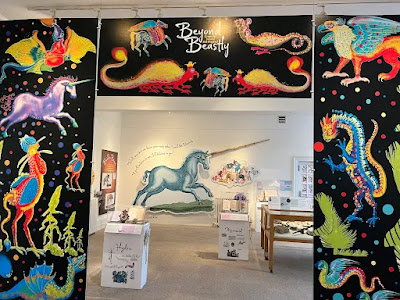 I popped into the Bath Royal Literary and Scientific Institution for their ‘Beyond Beastly: creatures natural and imagined’ exhibition. It’s a fun and varied look at mythological creatures from unicorns to jabberslythes.

Dominated by a massive unicorn cut out with a narwhal’s tooth where the horn should be, this was right up my alley. I love mythical beasts with Chris Lavers’s The Natural History of Unicorns and Peter Dickinson’s The Flight of Dragons being some of my favourite books. The aim of ‘Beyond Beastly’ was to show how our ideas about animals have changed and how the rational and irrational parts of our culture feed into and off of each other. There are real creatures named after mythological ones because they reminded scientists of the legends, that in turn may have inspired the legends to begin with.

What’s really fun is the sheer range of items in the exhibition. There’s Dürer’s famous rhinoceros engraving and weighty works of natural history and proto-natural history but these are contrasted with fossils and bones, teeth from extinct sharks and Maori accounts of Moas to copies of Aquaman, Conan the Barbarian and My Little Pony. There’s even a jabberslythe model - a creature I had never heard of because it’s part of Warhammer and was leant to the exhibition by Bath’s local Warhammer Branch.

I then mooched and wandered, may have popped into a few bookshops before finding Sally Lunn’s, claiming to be the oldest shop in Bath. A little research reveals that much of Sally Lunn’s ‘history’, including the existence of Sally Lunn herself is highly dubious and probably invented in the 1930s when the present teashop was founded.

However, I did have one of their buns. To be honest, I expected a little more, having heard of them a few times and unable to find the place last time on the really bad map Bath gives to tourists. The bun itself is a soft, white roll a bit brioche-y. It's perfectly pleasant but not all that special in itself. What made it special was that it has been warmed in an oven, slathered in butter and served with a really good lemon curd and a pot of loose leaf tea. I suppose there was virtue in its simplicity and, full of bun, I went to the forbidding but very cool bookshop by the station and then onto the Pizza Express to meet the rest of the group. (I had a starter for my meal, because I really was very full of bun).