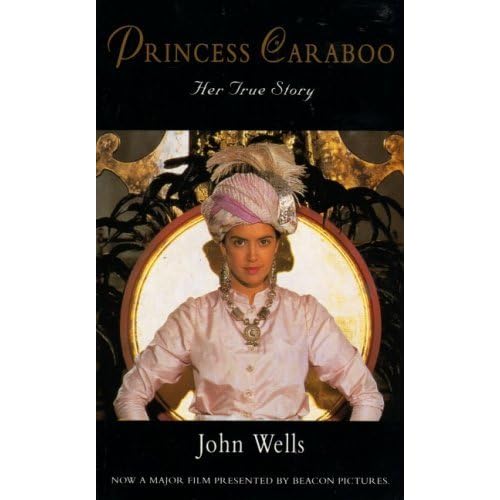 Princess Caraboo is an unusual book. Rather than the film being made of the book, this book stems from the same body of research that created the film, rather like The Return of Martin Guerre by Natalie Zemon. The book is structured in three parts, the first being a telling of the Lady Caraboo legend, the next being an in-depth look at the person behind it and the third being a fascinating, if somewhat meandering look at the process of assembling the research and writing the film.

The book chooses to begin in a village just outside Bristol, where a strange woman is found wandering. She wears a simple black dress, a black turban and appears to speak no English. She is, technically, in breach of the law and could find herself imprisoned, or at the very least forced back to her home parish - yet which parish is her home one? Is she even English? After some to-ing and fro-ing, she finds herself being looked after by Mrs Worrell, an intelligent American married to a local bigwig. She convinces him that the woman is something special, from a great distance and possibly even royalty. She even finds a name, Princess Caraboo.

The house becomes a beacon for any local intellectuals, all wishing to discover more about the elusive woman, they discover she comes from Javasu, that she is the daughter of Jesse Mandu and that she is mixed race of Chinese and Malay origins, which explains the unusual fact that she looks like a dark-haired European. The woman has a number of strange accomplishments and habits; whether it is washing her cup after each drink, only eating meat she’s captured herself or praying to the God Alla-talla from the roof. What’s more she’s skilled in climbing trees, shooting self-made arrows, or swimming naked in the pond.

While here Javasu script was declared ‘humbug’ by Oxford scholars, a local renaissance-man, Dr Wilkinson declares her genuine and publicises her around the country. This is Caraboo’s downfall, a previous employer recognises the description and confirms that she’s actually Mary Baker/Wilcox, a cobbler’s daughter from Devon. To avoid embarrassment, she’s shipped off to America.

In some ways, her story was much like George Psamanazar, a man from the beginning of the eighteenth century claiming to be from Thailand. The impostures worked in similar ways, both kept their invented languages consistent, both were also consistent in their habits and backstory. Caraboo’s deception also worked because of her prettiness, her dignity in bearing and her skill in listening to people who think she can’t understand them and enacting their prejudices and expectations.

If anything, the second part of the book is more interesting, detailing Mary’s life before she was Caraboo. Much of the part is taken from a journalist called John Gutch, a keen collector of hoaxes, he bought what he thought were the papers of famous fake Chatterton. Amusingly the papers he had were false ones. One of the fascinating tensions in this part of the book is that although Mary is not playing Caraboo, she still has an instinct for drama and story that makes her testimony suspicious - more amazingly, much of what she claimed about her early life can be backed up by documentary evidence.

The daughter of a cobbler, she worked in Exeter for a while before running to London. Prone to fevers, she collapsed at Hyde Park and was taken to St Giles poorhouse where she was cupped on the back of the head to cure her. She worked for families in London, before deciding to join the Magdalen Hospital, a charity for reformed prostitutes. She said she did it because she liked the uniforms and her entry papers detail her story, which reads like an eighteenth century amorous tale. While she may have been paid for sex at some point, it’s not even clear she ever was a prostitute. When she got tired of the place and left, she worked for a few more London families, went back to Devon and then back to London. By this time she had a new surname and a child. The exact nature of her marriage, or the father of her child was never confirmed, Mary having any number of stories depending on who asked her. The baby was left at the Foundling Hospital where he was raised and given a new name. This completes Mary’s tour of some of the most prestigious London charities of the early nineteenth century.

She claims she hiked back to Devon dressed as a man, where she was accosted by highwaymen and nearly forced to join them on a job.. probably not true, but with Mary it’s hard to say. She started begging, first as a French woman, then an Italian and then as the mysterious Caraboo - bringing us back to the beginning of the book.

The third section of the book details how John Wells was commissioned to write a script about Caraboo as a ‘ridicule against pseudo-intellectuals’ and how he worked it up, adding in a love story with Gutch and adding a bit more pizzazz, the real hoax only lasting a few months. He also talks of how he tracked down the details of her earlier life and of his meeting with Mary’s descendants, discovering that she ended her life in England as a rather successful leech-merchant. Although this section was a little unfocussed, I’d like more biographies to have a little part detailing the process of putting it together, as the relationship between a biographer and subject is on that really interests me.

John Wells’s own relationship with Caraboo/Mary has a slightly unseemly focus on her prettiness. He feels that people’s attraction to Mary, whether sexual or not, aided her greatly in winning people onto her side and while his may have been the truth but for the writer of her biography to linger over her ‘sensual lips’ and ‘firm breasts’ seems more than a little distasteful. It’s also a little strange how he ‘sees’ the face of Mary in her descendants, despite him never having seen her face in any more than portraits. I was also notable how John Wells peppered the biography with loosely connected oddities like the election of a Mr Bastard, or of a publican putting frogs in his beer to flavour it.

Despite that, this is a really peculiar and interesting biography, as interesting for its relationship to a rather fluffy film as it is for the story of Mary herself and the effort put into finding evidence of her real backstory really pays off.