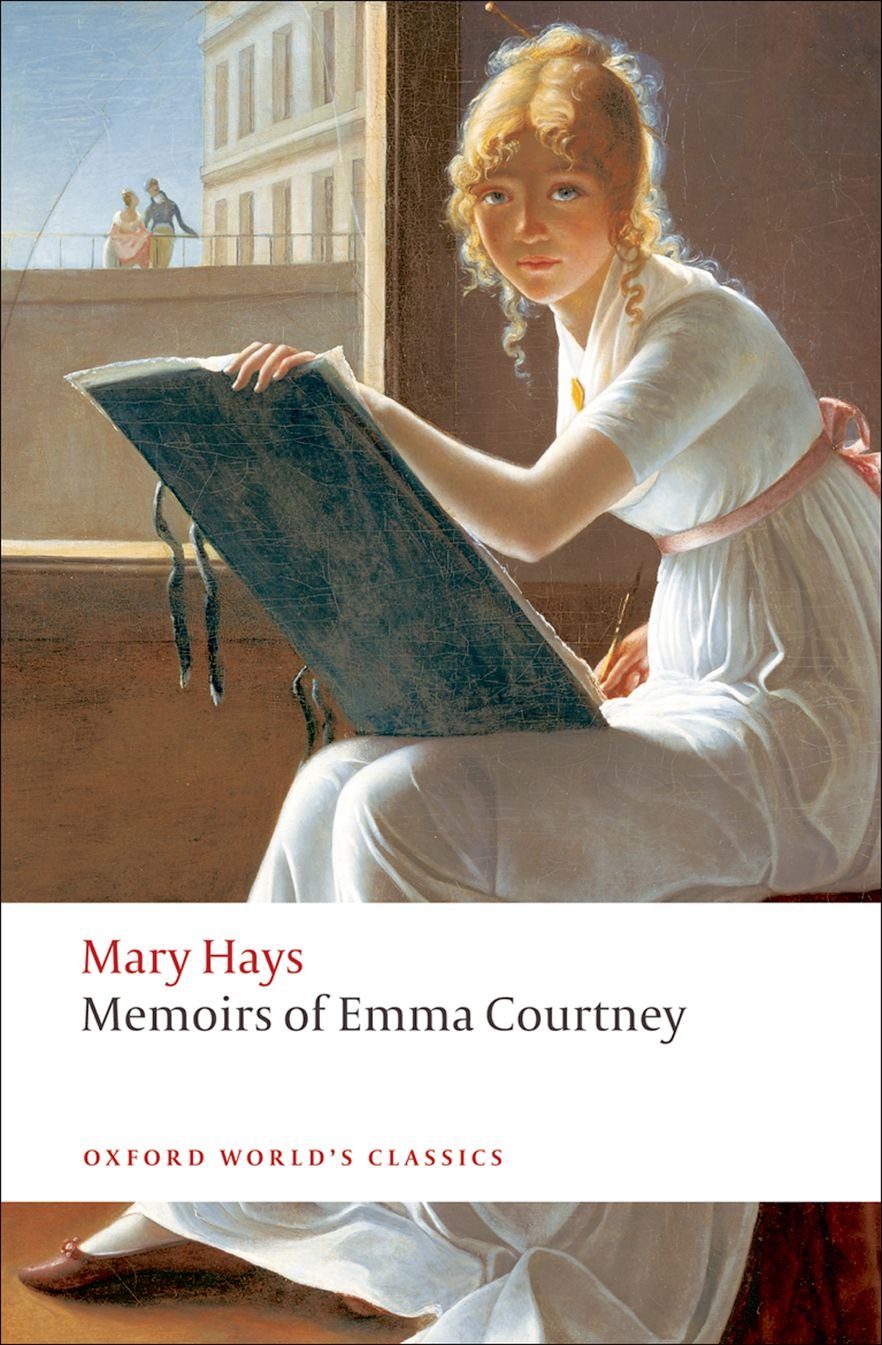 Memoirs of Emma Courtney is one of those books where the story around the novel is as interesting (or in this case, more interesting) than the novel itself.

Mary Hays was an interesting person, born in Southwark to a dissenting family, not far from where a young Mary Wollstonecraft has also lived. She had to fight her family to allow her to marry the man of her choice and right when she convinced them to finally let them marry, he died. She became friend with a group of radicals, including William Godwin, who would be her mentor. Writing a selection of essays, she attracted the admiration of mathematician William Frend who she completely fell for. She wrote him a number of love letters but her love was unrequited. Filled with emotion, with nowhere to release it, William Godwin recommended she used her letters as the basis of fiction as a means to work through her feelings and produce something interesting. Memoirs of Emma Courtney is that novel.

The novel is framed as letters from Emma Courtney to Augustus Harley, a young man who has been pestering her for some details from her life. The retelling begins interestingly if a little conventionally. She was born in a loveless marriage where her mother died shortly after. He father being too invested in his playboy lifestyle, she is shipped off to her auntie and uncle. (They are incidentally called Melmoth, which made me smile considering the later 1820 work.) There is is loved and loves in return, she shows a prodigious love of play and stories which develops into a love of reading. In her grief when her uncle dies, she claims to read 10-14 novels a week. She claims that her happy childhood and devotion to her aunt and uncle taught her “that lively propensity to attachment, to which I have through my life been a martyr.” Her aunt sees this and, on her deathbed, gives a lengthy warning for Emma to keep her emotions in greater check. A warning so lengthy and so verbose it comes off as comic. This is an accident, there is nothing in the slightest bit playful or funny in this book.

The point of all this, other than to pad out the text, is to show the education Emma receives in childhood. It seems, from the amount of times she quotes him, that Mary Hays was a huge fan of a French philosopher called Claude Adrien Helvétius. He took ideas from Locke and expanded them. If people are blanks slates in which sense impressions from consciousness and intelligence, then all humans (male and female) are born with equal potential which is shaped and limited by childhood experiences. This also linked very well with Wollstonecraft’s writing about how women were intentionally stunted, physically, mentally and spiritually by their education and it was through learning that women could learn to develop into rational equally able to participate with men.

It’s important to Emma Courtney, that she had a different upbringing than many women and unlike them had a chance to develop skills of rational argument and logic, something which greatly informs how she behaves in the rest of the book.

After the death of her uncle, aunt and father, she goes to live with another uncle. They keep table with Mr Francis, our William Godwin stand-in and Mr Montague, a flighty young man who alternately flirts with her and her two cousins. She also strikes up a friendship with Mrs Harley, a widow who talks repeatedly about her wonderful son. Emma falls in love with these stories and the picture of him kept in the woman’s house.

In a rare exciting scene in the novel, she is summoned by Mrs Harley who is sick. Mr Montague accompanies her out of gallantry and they rush off in a carriage that bumps into a figure on the road and starts to teeter. Mr Montague leaps out the carriage to save his own skin and is run over by a back wheel, then the whole thing overturns. Emma is okay and takes off the man who was bumped to nurse him back to health. Of course he is Mrs Harley’s perfect son, Augustus. As he heals she spends time with him and he teaches her, she falls even more in love but although he is kind and seems to love her, he just won’t commit.

This is where the real love letters come into play. It’s interesting that in the novel, Harley has a very good reason he can’t commit to her (and a deathbed confession of love). In reality, the recipient just wasn’t that into her and it’s easy to see why.

The first letter is excusable, it’s a gushing declaration of love that details all the ways in which she thinks he is wonderful and offering her complete devotion in return. I am certainly guilty of sending such an embarrassing letter to someone who didn’t reciprocate and was probably turned off. What I didn’t do, was follow it up with a series of increasingly long, dull and bludgeoning series of letters, which is exactly what Emma Courtney does and Mary Hays did.

If these really are versions of love letters she sent, then they are the most astonishingly wrong-headed, passion-killing love letters of all time. They veer between the oddly boastful (“I would give myself to you - the gift is not worthless.”) to the knuckle-gnawingly pedantic. The worst example is one where she lists the four main reasons he may not want to enter into a relationship with her and uses facts and logic to take apart those reasons. I can see her angle, to show that she’s not like other girls, that she can wield a logical argument but it is so leaden, so dull, there’s no twinkling of fun or pleasure. I’m not saying women should pretend to be bimbos to win men, only that even in the eighteenth century (or especially in, if you’ve read much around it) there’s an element of romantic intercourse in which both parties try and please the other. The love letters are ultimate passion killers.

They are also book killers, any momentum is ground to a halt for a hundred pages and the parts linking her letters only talk of depressive lethargy. She’s very good at the details, talking about how she moved “restless and dissatisfied, from seat to seat.” When I went through a depressive phase on leaving university, I called this restlessness ‘moop’ and made a video to show it.

After a long period of depression and empty philosophising, she finds out the reason he can’t respond. Then the plot kicks into high gear; in 30 pages she becomes bankrupt, marries a second best and has an uneasy marriage as a result, is cheated on, there’s also infanticide and suicide - then the book ends. Had the love letters been omitted and this material been explored, it could have been a really interesting, dark novel but they weren’t and it isn’t.

In some ways the book is like an earlier By Grand Central Station I Sat Down and Wept but if the passions of that book been funnelled through a university logic class. It’s turgid and awkward and really only interesting for how it was written than what was written.

As a complete aside, this is possibly the third Oxford World’s Classics edition of a novel I’ve read recently that seems a little sloppy in the editing. In this case, the text seems to have been (digitally?) converted from an older print copy and on three occasions the long ’s’ has been converted into an ‘f’. This means at a critical point at the novel, a character lets out ‘convulsive fobs’.