Under the Glass: The March of the Guards to Finchley

On the 4th December 1745, the Jacobite Army reached the city of Derby, as far south as it would reach. Armies. London fielded its finest soldiers, ready to defend it from the foe, mustering in the nearby village of Finchley. 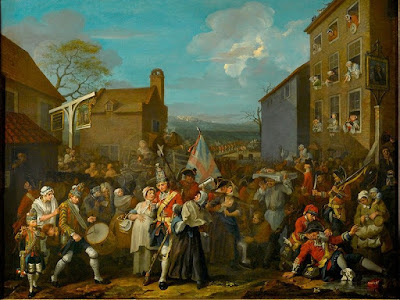 Five years later, Hogarth took the opportunity to create an artwork of this moment, filling it with character and movement, planning it as a gift for King George II. He famously declared that he “hated poetry, and painting too,” and spurned the gift for its burlesque nature. Insulted, Hogarth reassigned it to Frederick, the King of Prussia who liked the painting more than George had but also declined to keep the painting. In the end, Hogarth decided to use the painting as a prize in a raffle for the Foundling Hospital, of which he was an ardent supporter. However, even this raffle wasn’t the success Hogarth had hoped for and he petulantly gave most of the tickets to the Hospital who duly won it and keep it to this day.

The painting us famously full of event and detail, from Mother Douglas’s brothel, transposed to the Tottenham Court road, the many dolled up women waving to their leaving sweethearts. If Jeoffry: the Poet’s Cat is correct, then even the young Jeoffry is cavorting on the top of the building. Drunken soldiers weave, hat’s askew, some fallen on the ground having more gin poured down their throats. Other soldiers one last grope, wearily leave behind the pregnant women and women with babies fighting over them. Possibly the only sober soldier is a young fife player, adding to the tumult.

..Yet, there may be more to this famously full picture.

Jeremy Bell, a freemason and historian of freemasons is also a keen Hogarth fan and has put his interests together in the form of a number of books. My favourite titled has to be The Fine Art of Dickpics and Selfies, yet the one that concerns us most is William Hogarth – A Freemason’s Harlot. Here he uses his knowledge of free-masonary, ten years research and a very keen eye to find even more in Hogarth’s paintings than have been seen before. 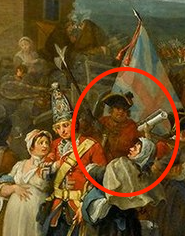 He has found, within the painting, pictures of both Charles James Stuart, The Young Pretender, and Cumberland, now passed down into history as the butcher of Culloden. A young man is seeing off his pregnant wife while being attacked by a woman in almost nun-like robes and, in the print made of this picture, a pro-Jacobite newspaper. Through a trick of perspective, it seems like the newspaper impales a burly man in the back. This man, particularly in the print version, looks a lot like the equally burly Prince William, the Duke of Cumberland, George II’s youngest son who led the Hanoverian troops against the Jacobites. 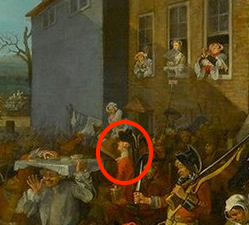 But, even the Bonnie Prince may be found in this painting. After the battle, he famously escaped to Skye disguised as a maid and his slight, wispy figure may have helped him in this ruse (though he showed too much of his legs under his dress). This figure, standing ‘straight as a lance’ as the Prince was known to do, stares north towards the Jacobite army. Also in that direction is an oak tree - the oak being a symbol of the Stuart house after the future King Charles II famously his up one. The oak is bare, to show the ultimate failure of his venture. He also stands among a set of people stealing from each other, as he planned to ‘steal’ the British Throne. Incidentally, this is a big year for him, the 31st of December will be his 300th birthday.

Although King George II turned down the painting, largely for its burlesqueries on the English army, it may be that the hidden message is more supportive of the Hanoverian cause than it first appears.

If such speculation, intrigue and plain, good, fun interest you, it may be worth checking out the website brotherhogarth.wordpress.com and seeing what other fascinating things may be found in your favourite Hogarth pictures.

Email ThisBlogThis!Share to TwitterShare to FacebookShare to Pinterest
Labels: Art, Thoughts, Under the Glass