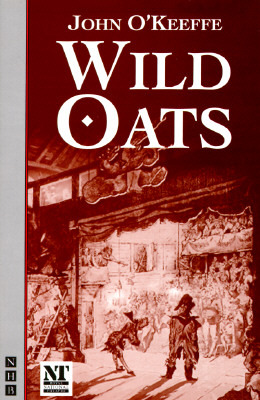 The internet has been a marvellous tool in this time of coronavirus, bringing people together in shared interests even as they are separated into different houses and scattered throughout the country. At least it is when it works. There were a few wobbles with technology at the beginning of this session but after a few prayers to St Isidore of Seville, patron saint of the internet, things straightened out. Leaving us solely in the tangle that is the plot.

With only 20 pages to go, there would have to be some rapid about-faces to untangle the current knot, a feat that O’Keefe surprisingly pulls off with ease. Lady Amaranth quickly discovered Ephraim Smooth, the man charged with keeping her on the straight-and-narrow, in a compromising position, something she could use to gain her independence. Sir George Thunder was attacked by ruffians and was saved by Rover, who runs back into Banks’s house where he saves Banks’s (newly introduced) sister from the indignity of a bailiff.

Arrested under the ruffians false witness, he is taken to Lady Amaranth’s house and put on trial before Sir George thunder. The needs of the trial serves to straighten out each character’s identity. Of particular note, that Rover was a baby taken from a loving mother who was jilted by a sea captain and raised abroad before coming back as a wandering actor. His unknown mother happens to be Banks’s sister, his father to be George Thunder and the fake priest Banks himself, yet he was actually a real priest, making Rover the legitimate heir to Sir George. Newly rich and honoured, Rover feels he can marry Lady Amaranth, who suggests that her own fortune is enough for them both, so why not let the freshly disinherited Harry Thunder have it?

And so all they all live happily ever after. Probably.

I had quite a few lines in this final instalment and my notes aren’t as useful as they may have been. There’s a scene between Lady Amaranth and Amelia, Banks’s sister (and secret mother to Rover) where they seem to be trying to outdo each other in noble romance heroine sentiments, with Lady Amaranth declaring that, “Duplicity, even with good intent, is ill”, blissfully unaware of the duplicities that surround her. When she hears Amelia’s tale of woe, she says that,“My pity can do thee no good, yet I pity thee.” Which is sometimes all that can be said.

Sir George Thunder and John Dory again prove themselves to be a brilliant comic pairing in the scene where the ruffians threaten to kill them. Rover rushes to the man’s defence, with Sir George Thunder being keen to get on the action. He’s detained by John Dory, who carries him off, walking  a ‘noble crab walk’ - which took some imagining.

Another great scene of comic violence was Rover against the bailiff distressing Amelia. In all the scenes were Rover has to face someone down, he does it with a wonderfully out of place sense of politeness. He bows with great ceremony to the bailiff and declares himself a ‘humble, obedient servant’ before asking him if he’s ever been astonished. When the bailiff asks why, Rover replies that he intends to astonish him, before hitting him on the head and declaring him astonished. After inflicting a few more astonishments, it’s his suggestion to amaze the bailiff next that has him running from the room.

Other highlights include the phonetic spelling of ‘A-bo-min-a-tion’ that Ephraim declares the play, echoed back to him by Jane, who exposes his hypocrisy. There’s Sir George’s appellation of Rover as ‘Puppy Unknown’, who also gets to call Ephraim, ‘Squintibus’.

All in all, Wild Oats was a very enjoyable and successful play, and John O’Keefe an under-noted author. Born in Ireland to a family who’d lost their land through supporting the Stuarts, he worked in theatres in Dublin and London. Primarily he wrote afterpieces, funny little plays that took place after the main performance. It was possible to get cheaper tickets to slip in during the fourth act of a play just to watch the afterpiece. He wrote Wild Oats late in his career, having become blind in that time. One story tells of him standing in the wings, listening to the rough reception of a play and having to go outside, before his daughter came and pulled him back in to hear the audiences laugh hysterically.

He’s also a tax-cheat - sort of. During the 1977 run of the play, a letter arrived at the theatre from Her Majesty’s Inland Revenue and Customs. They’d noticed the success of the play and had also noticed that this Mr John O’Keefe had very few tax-records, so they demanded he sort his tax situation out, not easy for a man who had died 150 years before.

Our next performance will be of Henry Fielding’s The Modern Husband. Anyone interested in signing up, make themselves known on the Dr Johnson’s Reading Circle facebook page or contact Jane Darcy. Hopefully, Fielding can entertain us as much as O’Keefe did.