The Revenge of the Return of Leon Garfield (Part Three)

Part Three of my most recent Leon Garfield binge, five books this time and some of them very short. 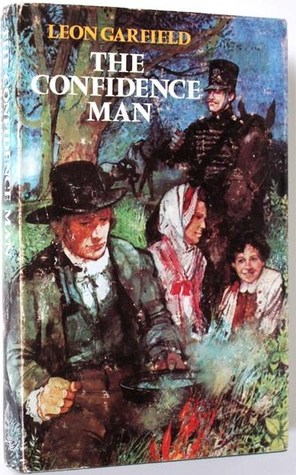 This is a good one. It announces this quality from the first paragraph when the book introduces us to a grimy part of town where the sun doesn’t shine and “the air seemed tired of being breathed in, and loafed about, thinking of cabbages and pickled herrings”. Leon Garfield can always spin a decent tale and pull off a striking and interesting description in even his most rote work, but there was a real feeling of investment in this book that permeated it throughout.

This book is set in the eighteenth century and the main character is a young man making his way in the world. As well as that, there’s a mentor figure of dubious morals and even the new Garfield-usual I’ve picked up on - the pseudo-ghost. Despite the presence of these usual Garfield tropes, they are dealt with in a fresh and re-energised way. For a start, the book starts off in Germany and our young man is a protestant in a Catholic town, where he and his family are persecuted. Following an accident with a soldier, a storm and a missing head, the family and their whole community decide to go to America. They get this idea from Von Strumpfel, a hussar and the confidence man of the title.

He is the morally dubious mentor figure for the while, but his moral dubiousness is itself fairly dubious. Indeed, what sort of confidence man he actually is, whether he is trying to con people, whether he gives others confidence, whether his only con is his self confidence, are all interesting facets of this character as we travel with the outcasts.

Garfield has great fun with this exodus, exploring how the uprooting of people from their street and setting them on the march both changes and doesn’t change them. For most of the journey they camp down in the exact order they left, meaning that wherever they go, they recreate the street they left behind. However, the relationships and expectations have changed as well. The previous hierarchy of the street is questioned, as they are all levelled as poor as each other, it’s character that shows more than wealth. By the time the refugees reach their final settlement, they create a new town reflective of where they are from but also of the things that have changed along the way.

There’s also a spirituality about the book. The group are protestants fleeing Catholic persecution, though they have a detour to England where it is assumed they are Catholic and allowed to starve in a wasteland. Hans, the main character starts of as an atheist, pretends to be religious to impress Von Strumpfel, grows some faith, loses whatever faith he had and then regains it for a reason he realises is pretty arbitrary. It’s interesting to track this element as the book progresses.
It’s also a book where a man is decapitated by flying debris, lightning strikes a gibbet cage, a thief uses a hand of glory and various people see ghosts. It declares that a puppy has become a man now when it cocks it’s leg, includes people who play their hats as musical instruments and asks the big question about a nice walk, “Why is there so much more hill than dale?”

Even as far as Leon Garfield goes, The Confidence Man is not a particularly well remembered book but it’s one of his best.

A book for younger children, it finds Garfield at his sweetest, most storytelling tone. It feels like this is a book made for reading out loud to children and has a beautiful first paragraph describing London in the twelvth century as ‘like a garden with a wall around’. We are also introduced to our hero, Gilbert Beckett who wears, ‘a crimson cloak and yellow stockings, like plums and custard.’

Gilbert is a forgetful soul and his parents are very worried about him as he makes his trip to ‘the East’, a land where carpets fly and genies are stoppered in bottles. Unfortunately, he is captured by Barbary pirates and is taken for ransom because of his expensive clothes. Unfortunately, not the most intelligent of people, he can say no more than his own name and hometown so is kept in a dungeon. There the fair saracen maid releases him and escapes herself, using Gilbert’s only two words as a guide to lead her to him where they marry and live happily ever after and have ‘a daughter called Agnes and a son called Thomas, who became a saint’.

Apparently, this is quite an old legend, told by a number of people and somehow being attached to the parents of St Thomas Beckett, even though his mother was a Norman woman called Matilda. This story was still being told in the Victorian era and Dickens wrote a version for one of his magazines, probably Garfield’s main source as he was a Dickens nut. I can’t say I had ever heard of it before though.
This was a very short and pleasant read and I might read it to the kids at school one day. 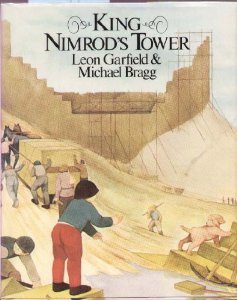 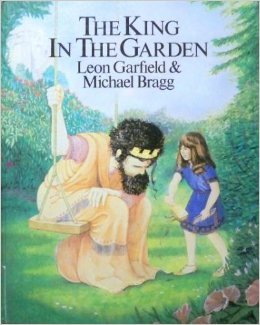 King Nimrod’s Tower and The King in the Garden

I’ve grouped this two as a strange blip on Garfield’s worx. While books like ‘The Confidence Man’ and many of ‘The Apprentice’ stories suggest a spirituality in him that may be of a Christian nature, especially when considering the attention (and occasionally dignity) he offers to outcasts and diamonds in the rough, these two are retellings of Bible stories. Oddly, they are both set in Babylon at different points of the Bible and both deal with arrogant kings.

‘King Nimrod’s Tower’ deals with the Tower of Babel, but from quite an oblique angle. A young boy has found a recalcitrant puppy and is trying to train it while the tower of Babel is being built in the background. The dog not listening to instructions are being compared to the workers carrying out theirs in perfect harmony. Throughout it all, Nimrod is making plans to climb his tower to heaven and show God how things should be.

Despite the panicking angels, God is not paying the tower much attention, being far more preoccupied with the boy and his dog. When it’s suggested he knock the tower down, he refuses because he doesn’t want it to crush the kid and puppy. Finally he curses the workers with different languages and confusion but blesses the boy and dog with the ability to communicate as “My Kingdom of Heaven is better reached by a bridge than a tower”.

I found it interesting how Garfield adds the dog story to reinterpret the Tower of Babel myth, giving God a tone of warmth for the boy rather than spiteful jealousy against the builders. There’s also something distinctly Christian about how God describes his kingdom of heaven.

‘The King in the Garden’ is about a girl called Abigail who finds a dirty old man in her garden. He’s covered in hair and brambles, he eats the grass on her lawn and tries to drink out of the fishpond, she finds him utterly disgusting. Her following and listening to the story of this disgusting hobo are interleaved with people in the court of Nebuchadnezzar, who carry on as if he’s there and not noticing he’s gone. Eventually, Abigail shaves and restores the hobo back to his old self and realises with shock it is Nebuchadnezzar, condemned to madness for his hubris, she leads him back to his palace.

Again, Garfield has added a child to add a different slant on the Biblical meaning. The emphasis is less that Nebuchadnezzar is being cursed but on how his madness and absence make no difference to the running of his country. When he comes back to his senses, he feels his country must have fallen apart but nothing of that kind has happened.

I don’t know much about Leon Garfield’s faith but if these books are a suggestion, he’s a Christian with an emphasis on the importance of the ‘little’ people and from his other works I’d also suggest a belief in divine justice and also a strong element of pacifism - was he a Quaker? I enjoyed these little books though. 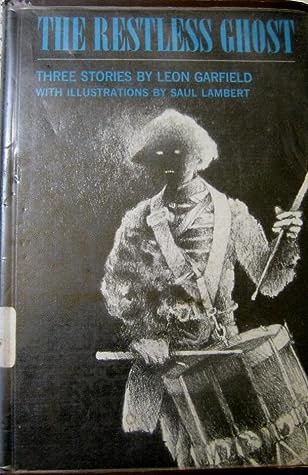 This is a collection of three Leon Garfield short stories and I’m sure I’ve read it before. I checked my bookshelves, I looked at my reviews and records, if I did read them, it was before 2011 but I must have, I remembered so many details.

It’s packaged like ghost stories but only the first story, The Restless Ghost is. It’s also the first appearance of Bostock and Harris, who would later be the main characters in two novels. Their personalities weren’t quite as defined as in the full novels but they are essentially the same, risk-taking boys with too much imagination and a tendency to cause trouble.

The boys hate a sexton in a church in Hove. He’s horrible, frightening and is far too vigorous in his efforts to keep boys out of his graveyard. Years ago the ghost of a drummer boy had been seen patrolling the area but had been rumbled as a ruse by a group of smugglers who were later hanged. The boy himself disappeared. Bostock and Harris decide to recreate the phosphoresce the original smugglers used and be the ghost themselves, this all goes out of hand - as we now expect from these two. The story is entertaining, it has a good little twist at the end. I’m not sure that it’s a particularly creepy or frightening ghost story in itself but it did keep me fixed till the end.

The Second story is the one where my feeling of deja vu really kicked in. It is such a peculiar little story that it’s not a ‘type’ and so the details really popped out. It’s about a Dutch painter and his apprentice going on a ship to paint a battle with the English. It’s a nifty little story, the painter is an absolutely spineless man with poor personal hygiene and extreme rudeness - but it’s all worth putting up with for his genius at capturing an event on paper with a full sweep of humanity that his other actions wouldn’t suggest. It’s the shortest of the stories here but it introduces a really under-represented part of English history, the Dutch naval wars and is a pretty interesting little story in itself.

The last story, is the longest and the one I had the most deja-vu moments about. I remembered a character finding themselves in a confined space with irons flying about and I remembered a line about the ship without its sails up looking like a house without a roof. The story itself is about the dramatic events on a ship transporting convicted felons, including mutiny, murder and love-at-first-site. Again, it’s a very good story but I was so nagged by the feeling I’d read it already and trying to work out where, that I was a little distracted.

It's taken me a month to realise - the last two stories in this collection were also the last two in Mr Corbett's Ghost, I'm glad I realised that and am not going mad.