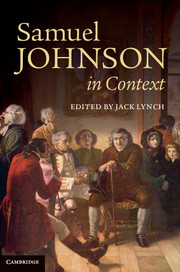 I’ve started volunteering at the Dr Johnson’s House Museum in London and this was one of the books there I’ve yet to read. It’s a collection of essays exploring Johnson through different lenses and contexts. Each essay is short and most are easy to read, enlightening which makes the book a pleasure and probably one of the best books about Johnson that I’ve read.

There were 47 different essays and each one illuminated a small facet of Johnson and his work and while it might be fun (for me) to go through all 47, I simply want to share some of the things I learnt which caught my attention the most.

For example, one of the essays was about Johnson’s correspondence, in which he declared to Hester Thrale that the letter would contain, ‘the history of one of my toes’. The point the essay made, which will probably influence how I read all eighteenth century letters, is that all letters were paid for by the recipient. This means the writer had to perform a little, and create letters that were worth paying for. It also makes me think how much Clarissa Harlowe’s friends must have hated her.

Another essay on editions of Johnson’s work highlighted how sloppily they were edited and how they simply accrued mistakes, leading to a version of Rasselas which had an additional fifty commas in the first chapter alone. An essay on translations of Johnson’s work brought my attention to the difficulty in finding how Johnson disseminated through other languages, how some of his stories appeared anonymous in Russian language papers for centuries and how Spain (oddly) had the most carefully curated translations of his Rambler essays.

Did you know that after his death Johnson had his long removed and drawn? I didn’t. Nor did I know that the image occasionally pops up in medical textbooks about emphysema to this day. Nor did I know that on seeing a portrait of himself, Johnson called himself an ‘ugly dog’. He also had nicknames for other portraits, including ‘Surly Sam’, ‘Blinking Sam’ and ‘Sam’s Grim Ghost’. Nor did I know there was a print of Boswell licking Johnson’s anus.

Talking of ghosts, ever heard of a ghost-word? It’s what happens when a printing error occurs in a dictionary that people later take as a real one. Misreadings of the long-s in Johnson’s dictionary gave us the word ‘foup’. It has no meaning. The same essay that gave me that little nugget also helped me understand further what was so groundbreaking about Johnson’s dictionary over previous efforts.

An essay on Johnson’s conversation reminded me of his strong Staffordshire accent, but also told me that as Johnson lost his teeth, he became even harder to understand. The essay on essays reminded that the Rambler essays only came out with the author known as Mr Rambler. Johnson was never happy with the title but couldn’t think of a better one. Not only does it imply that the essays ramble (as this review does) but the word also had rather sexual connotations, a rambler would generally ramble after one thing.

The only two essays out of 47 that I didn’t enjoy were the ones on law and literary theory. The later one was too dense for me written in literary theory jargon and less open to a generally interested reader. The law one kept reminding me that as an American, I may have difficulty imagining the English legal system, it reminded me of when Hamilton in London introduced George Washington as the leader of ‘our founding fathers’. He also described the very open-minded Samuel Johnson as ‘cloistered’ and slags off Lichfield.


Now, my description of this book has been very bitty, I’ve mainly been typing up the favourite notes I made about the book but the experience of it was anything but. Because each essay had only a little time to make its point, most were very focused and the result was a multifaceted look at a person and their times in a way that was greater than it’s parts. Once someone has read a good chunk of Johnson, some Boswell and the Walter Jackon Bate biography - I’d recommend this, and that’s high praise indeed.