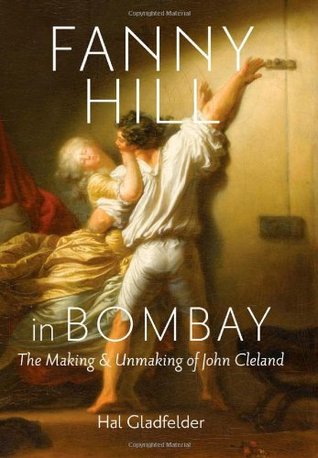 Facetiousness aside, the book does start off with an interesting discussion over what the point of a literary biography should be in an age which has declared ‘the death of the author’. I’m not much up on my French intellectuals, I once tore a Derrida essays to pieces with my teeth, but the general argument is that text should stand alone as knowledge of the author and the contexts surrounding them serves to fix and make rigid something which should be personal and responsive. This book argues back that knowing more about John Cleland actually destabilises his texts and provides more avenues of discussion. Although this was a striking way to start the book, I ultimately wanted it to cut with the wank and get into the proper stuff.

For example, I did not know that Cleland was a younger son of a fading Scottish noble family, nor did I know that he didn’t start off as author but as a colonialist in the East India Trading Company. His early professional life had him as a foot soldier for the company where he was quickly moved into a civilian role and quickly rose up the civilian ranks, becoming an attorney in company courts. There were discussions of a number of cases, one where he tried to prosecute a company board member for defaulting on the debt of a Hindu tradesman and another where he defended a woman who had become a freed-slave (though she may have obtained that position so she could testify in a rape trial and her freedom wasn’t freedom as such because she wasn’t free.) These cases showed Cleland to be fierce in speech and dedicated to those who may be trampled over by authority - interesting traits in a man best known for a pornographic novel.

Cleland returned to London to sort out family business, his father was ill. While there he also entered in conversation with the Portuguese government, even sending proposals to King João V. These negotiations were secret and concerned the setting up of a Portuguese East Indian Company, with Cleland as technical advisor. The discussions went some way before being lost in the shuffle of Portuguese politics.

The next we hear of Cleland is five years later, when he is arrested for the staggering debt of eight-hundred pounds. The man holding the debt is called Cannon, and Cleland later accused him and his mother of trying to poison him on four separate occasions. Stuck in the Fleet for a year, Cleland rewrote ‘Memoirs of a Woman of Pleasure’ and sold it to Ralph Griffiths under the dummy-imprint of his brother Fenton. The book took off and the Griffiths managed to arrange a deal with Cannon in return for Cleland’s writing services.

Although the book was a big success, the moral crusade against it didn’t really start until the second volume, which upped the range and frequency of the sex-scenes and included a part where Fanny spies a gay couple. About this time Cannon also got into trouble for a short pamphlet, only fragments of it remain in legal documents, but it is a compilation of historical and fictional gay sexual escapades. Cannon fled to the continent and Cleland kept his briefly arrested but released.

Here the book gets really interesting. The various readings of ‘Memoirs of a Woman of Pleasure’ really opened my eyes to the text. I’d thought of it as mainly being a slightly goofy, campy sex-romp which mainly appeals now for it’s peculiarly quaint shock value but this book opens it up to something a little more. For example, Fanny is essentially a drag persona - but so is the reader, frequently addressed as ‘Madam’, it’s unclear if the reader is supposed to be playing a role of a former madam themselves.

Adding to this, the route Fanny takes into her pleasure loving ways, first she is seduced by female talk of sex, then female sexual activity and then by being a voyeur of sex. Hers is a same-sexed attraction transferred to mixed-sex. The gay sex scene in the book is also the result of voyeurism, her appalled fascination with men-on-men action fixating on her disbelief that the parts will fit into each other, a disbelief she had previously held for male-female relations.

The phrase the book frequently uses is ‘unsexed’. The characters in the book are frequently detached from their sexed bodies and become androgynous people of pleasure. Cleland was often referred to as a ‘sodomite’ in his lifetime though never actually accused, whether he was gay himself (and a gay identity is only gradually being formed at this time) there is certainly something a little queer in ‘Memoirs of a Woman of Pleasure’.

From here the book looks at the next forty years of writing, never being quite unable to shake off the work that defined him. There’s a problem here for the reader, that the first book defined him and as interesting as some of the other books were, we frequently find ourselves back with Fanny Hill.

Queerness permeates much of this future work, in every way the word can be intended. His male followup, ‘Memoirs of a Coxcomb’ features the far bleaker story of a man who can’t escape his own romantic fantasies to truly love someone. ‘Memoirs of a Woman of Honour’ was stiff, awkward and no one liked it. Eventually he became an angry old ranter in newspapers and a peculiar etymologist. He claimed that he’d deciphered the Celtic language fully and with it Celtic political culture and wrote three books as part of an intended masterwork designed to show Britain it’s true history, language and greatness as a land run by law and ‘the people’, including the landless and women. Gladfelder brings it all back together by making innuendo between Cleland’s belief that the original spiritual symbol was the maypole and the manservant William’s massive manservant.