My own thoughts re-reading 'Joseph Andrews' 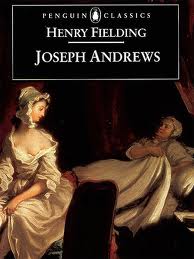 I thought I’d write my own personal reaction to reading ‘Joseph Andrews’ for the Dr Johnson House Reading Circle as it is, for me, a very important book. It’s the one that had me fall in love with the eighteenth century and its writings and so changed my life a little.

I picked my copy up for free from a box of novels being released from their service as part of Middlesex University, where I was doing my masters. At the time, I was a huge Kurt Vonnegut fan, had read everything he had written at least three times, some of them many more but was a little unmoored in my reading life. In ‘Joseph Adams’ I found the same qualities of an intrusive narrator, and a sympathetic mocking of the human race. It was also the first review on this blog.

I was surprised by the lukewarm reaction the book received in the reading group because, while it is no ‘Tom Jones’, it’s still a corker of a book. Henry Fielding hasn’t quite reached the skill and fun in that later work but still is wonderfully playful. He has moments where he tries to emulate what he pretends to perceive as ‘great writing’ by creating elaborate classical metaphors - at one point he goes on one of these highfalutin rants about vanity only to declare he’s done it “for no other purpose than to lengthen out a short chapter.”

I also love the running joke about Colley Cibber and his newly published ‘Apology’ (which I really must get round to one day). The book starts with such gushing praise for the man that it can only be ironic, declaring that it seems he’s lived such a good and moral life for the purposes of being able t write it up and disseminate it. What I like best is that the joke runs throughout the book and we never know when a sly bit of faux-praise is going to be slipped in for that most ridiculed of poet laureates. This was something that tickled me in that first reading but as I know more about the man and the debates about his appointment, I find it funnier still.

Another element of the book I picked up on more, were the elements of pastiche and parody. Although I knew the story of the good Samaritan, I hadn’t realised that the scene where the people in the coach bicker about helping the naked Joseph was a parody of it. I particularly liked how they decided they should help him, as they might be legally liable if they left him to die- very good and holy indeed.

Then there were the Quixote references, the Squire being like the rich couple in the second book, or like Parson Adams speed at picking up his crab stick and laying into some fools. Some of the fight scenes are actually well described, particularly the one between him and Fanny’s first attacker. There was a part when Adams goes all Glaswegian and uses his head  “as a battering ram”.

Parson Adams is every bit as good as I remembered but he entered the story far earlier. There’s still the feeling that he’s a second idea that takes over the initial one, but it’s so entertaining, I’m fine with that. I love how he is absolutely terrible at reading people, even people as transparent as Joseph and Fanny. I like how his vanity has him wish he had his best sermon to read so he can show it off, a sermon against vanity. I also love how Parson Adams claims to have “not much travelled in the history of modern times, that is to say the last two thousand years” - thus missing all the Christian Centuries - and the chapter where he thinks his son has drowned is still comic gold.

I find Henry Fielding quite a quotable writer. Some of the things he says are fitting, such as; “kissing is a prologue to a play” others are so inventive and daft I can’t help smiling. Fielding really  has a way with the simile, I particularly enjoyed how he started a sentence with; “As a person who is struck through the heart with a thunderbolt looks extremely surprised…” He also reminds us that there are some people without need of brains who have heads ‘for the sake of conformity’ - and to put their hats on.

He also hits on a number of characters and moments which I have met often in my life now. Joseph Adams bemoans how; “London is a bad place and there is so little direct fellowship that the next door neighbours don’t know each other.” I live in a small flat hewn into a townhouse, not only do I not know my neighbours, I don’t know people who live in the same building as me. This is even more pronounced as my landlord has a habit of creating new little flats out of nowhere.

Fielding’s description of drunken ‘lads’ conversation is also spot on; “Their best conversation was nothing but noise: singing, helloing, wrangling, drinking, toasting, spewing, smoking.” He then goes on to say that when they do talk to each other, they spend their whole time arguing violently about trivial things. As someone who’s been on a few stag-dos, this is utterly correct.

I also disagreed with the people who said there was no emotional moments in the book. I found the moment where Wilson proposes to his wife in the (admittedly very long) digression to be full of genuine passion and remorse - I got quite invested.

While ‘Joseph Andrews’ is no ‘Tom Jones’, I found it an extremely enjoyable book on re-reading it and I still recommend it as a good introduction to eighteenth century fiction.