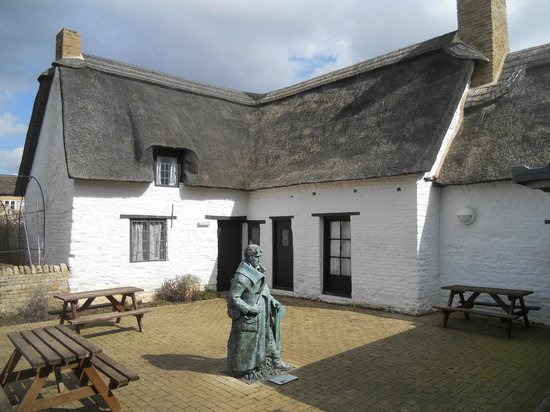 My parents have recently moved to the town of Stamford in Lincolnshire and I went up to see the new house, meet up with them and check they’ve looked after the boxes of books I’ve left with them. On the third day they offered me a trip out and I had a look to see what was around. I was surprised at the range of interesting things on offer but quickly decided I’d like to visit Helpston and the cottage of John Clare.

I didn’t know much about the man, other than he was born in the late eighteenth-century, was on the fringe of the romantic movement and hobbed and nobbed with Hazlitt. Part of me was expecting a slightly twee affair about a famous but rather dull poet - I was wrong.

We drove through tiny roads winding through fields where flocks of crows swooped from tree to tree, it was easy to imagine the country poet wandering around doing country things (whatever they might be). The cottage itself is a small, stone building with a thatched roof and looks exactly as quaint as I imagined. It’s only open a few days a week and the visitors centre was full, not with people visiting the house though, the visitors centre being home to a very popular cafe. The person at the front desk was a little brusque and quickly handed us our audio guides and pointed us in the direction of the cottage itself. I have a mixed feeling about audio-guides, they can enhance an experience but can also weigh you down with their interpretation of the museum and can become a bit of a chore. I was a little unsure as we went in.

The first room explains who John Clare was and contained the few items of his the museum owns. This is a common thing with house museums, their collections are often quite small and it is how they overcome them that points to their success. Ben Franklin House uses a complicated show with actor interaction, Handel House relies on its informative and friendly volunteers and Dr Johnson’s House focus on the building as a still-living hub of literature and fellowship. John Clare’s Cottage relies on its life and poetry of its famous resident, one poem in particular.

The second room dealt with the poetry and the audio-guide read out various extracts of John Clare’s poetry. They were read beautifully by someone who sounded like the late Pete Postlethwaite. This was where my initial expectations started to be surprised. John Clare did write plenty of ‘nice’ nature poetry but there was an anger and an outsider quality that bubbled up in many of them. The poem about Helpston did paint a rural picture but compounded it with a frustration of the ignorance of the people there. This culminated in ‘I Am’, a poem of strident urgency that wrested identity out of a confused life - I was looking forward to finding out more.

The third room was done up like a living room, with a fake fire, stools, a spinning wheel and a large table. It told of Clare’s childhood as an introspective, smart boy who attended as much school as he was able but still had to down pen and up tools at harvest time. There started to grow an understanding of the frustration I found in his poems, the feeling that even as a child, he was not completely in his place.

The next room was a kitchen, with that special kind of fake food that was also in the Dicken’s House and the Samuel Johnson Birthplace Museum - the very same food, I wonder where they get it. This room emphasised the hard work and precarious existence of rural life, how a bad harvest could starve a family and even a good year required lots of hard work. Again, the quaint countrysideyness that I was expecting was being subverted.

Then we climbed the stairs into a room with a desk. This room was about Clare’s brush with London fame. How he was celebrated and lauded but quickly began to feel like he was being treated as a novelty like the earlier milkmaid poets or cobbler poets. When he was no longer novel, he was dismissed back to the country, soured by London surface.

The room after that was filled with beds and talked about how John, his wife, his children, parents and sister all had to squeeze in the little cottage, how noisy it must have been and how difficult for Clare to find quiet. Again I was struck by the feeling of the poet feeling not wholly of his world, but not of the London scene either.

The next room showed the fallout of this, Clare went mad. He occasionally forgot who he was, was confused about simple things and had wild fantasies. He still remained a poet though and some of his strongest poems (including ‘I Am’, which came up again) were written in madhouses. He even got out for a while and roamed woods like a hermit before being put back in again.. Old, broken and poor he died and was taken to Helpston church where he was buried. I was really taken by the man who had written hundreds of poems (and a few prose works) despite poverty, lack of opportunity and eventual madness - he still managed it, imagine what he could have created with support.

The cottage ended there but the tour didn’t. Out in a courtyard was a statue of him. It was instantly peculiar because it was smaller than me and not on a pedestal. Looking closer, there were animals and people carved into his heavy jacket, looking even closer there were numbers. The numbers linked to the audio-guide where all the symbolism of the statue was explained - I think more statues should do that. We got another reading of ‘I Am’.

We then had a look at the gardens where the audio-guide got a bit hippy-dippy and asked us to look around and view things new as John Clare had done. It was a nice idea, but the tone was so different from the matter of fact one that had accompanied us on the way that it was a little jarring.

Finally we went into a dovecote where comments from visitors and even little poems were places in the pigeon-holes. There was also a screen where various people, locals and celebrities read ‘I Am’ on a loop. It’s a good poem but I was reaching ‘I Am’ overkill at this time.

And that was our visit. My parents had been pleasantly surprised, not altogether thrilled by my dragging them off to some old poet’s house. I was also pleasantly surprised. The presentation is a little rudimentary, and like many other smaller attractions it felt like it had enjoyed a huge cash boost on the run-up to the millennium and not much else since. What made the visit such a good one was the surprising freshness of John Clare’s poetry and the aching sadness of his story, I recommend it if you’re in the area.

Oh, and if you plan to go, check the dates and bring a warm jumper, unheated stone cottages are not warm. 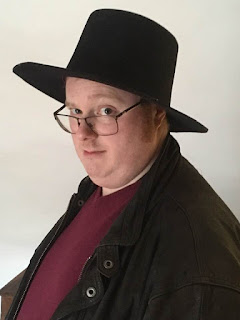 Of course there was a try-a-costume section, it was a historic house. This is me with a puritan-esque hat and I think I look good.