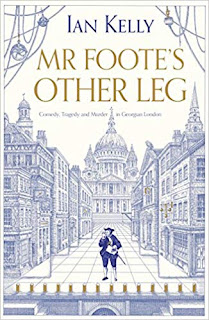 Although I looked at this book in my write-up of the Dr Johnson Reading Circle, I thought I had enough I wanted to say about my own personal reaction to it - so this is it.

Having come across Samuel Foote in the periphery of other works from and about the Eighteenth Century, I immediately snapped up and read this book as soon as it came out. I remember enjoying it and can recall many of the anecdotes and details. The only review I left said,  ‘Compelling and funny, if not completely convincing.’ I’m not completely sure what I wasn’t convinced by.

This is a book written by an actor and it shows, the description of the theatre’s workings and the evocation of performance are brilliantly done. Ian Kelly manages to overcome the problem that Foote’s comedy only really works with an audience is ‘in the joke’ (as a contemporary would have been and a twenty-first century person certainly isn’t) and he does this without making glib comparisons to specific modern references. There’s no painful, toe-curling references to his caricatures being like ‘Little Britain’ or ‘Spitting Image’ - not even when Foote’s using puppets. Though he does compare Foote’s curtain speeches to something like stand-up comedy, he only does enough to give the reader an impression of what Foote was to his audience and it isn’t cheap or facile.

The story of his early life in University instantly gave me an idea of the ‘type’ of person Foote was. Whether he was using his Barber to sell his essays to other students, getting cows to ring the warning bells or lugging a heavy dictionary to pretend to look up the difficult words of a sesquipedalian professor - he seems a playful and arrogant sort of person. Sent down before he could gain a degree, he found himself in a debtor’s jail where he received a letter from his mother asking for money because she was herself in one.

Not that there wasn’t money in his family, there was a lot but it was all tied up in a Chancery legal battle that lasted more than one generation and was one of the influences on Jarndyce v Jarndyce. When one of his uncles murdered another (possibly in a botched attempt to commit him to a private asylum) Foote gained his first small fortune in telling the story from a nephew’s perspective.

Haunting the Bedford Coffee house, getting lots of laughs and punctuating many jokes with ‘hey hey, what’, he trained in acting with Garrick under Macklin. They developed a more natural style, with Macklin redefining the role of Shylock and Garrick redefining pretty much everyone else. Foote was a more difficult fit, he had wit and charm but didn’t work in Shakespeare (especially as Othello) and seemed a bit restrained in more modern comedy. His role was to compere the evening at the theatre and to introduce and excuse the plays, this comedy styling was developed into his ‘diversions’ which became independent little shows known as ‘tea-parties’. This then allowed him to develop his stage persona, find roles that fit and to begin writing them himself.

He also hobbed and nobbed, particularly with the reckless Delaval family and the Duke of York. In an effort to make them laugh he tried to ride a powerful horse, fell and shattered his left leg. The description of the injury and the discussion of the proceeding amputation are both grisly and fascinating and one of the most interesting parts of the book. I think what I may have found not totally convincing in my first read was Ian Kelly’s thoughts on how this affected him. Using some of John Hunter’s notes, Foote is described as having problems with his nerves following the fall probably from the concussion and possible blood clots. These problems involved mini-strokes and (possibly) an increased inhibition, in a man who was uninhibited to begin with. It’s how much this inhibition can be attributed to the accident that I was unsure about.

Granted a summer license at the Haymarket following the accident (probably by way of apology by the Duke of York), Foote was in a position to print money, especially if he paid himself writing and acting fees as well. He made many jokes of his new wooden leg, claiming that he now was only ‘half as wooden’ an actor as Garrick - they had a friendship full of rivalry.

Launching a play at the bigamous Elizabeth Chudleigh, he found himself being accused of sodomy. As a ‘one legged bugger’ he said he wouldn’t stand for it. This is the second sticking point of the book, it spends the entire time shuffling (hopping?) around the nature of Foote’s sexuality. Although he was acquitted, the accusation by his footman Sangster, included details of furnishings and such that could make his accusation of attempted rape quite true. Foote’s persona had played with ideas of mixed sexuality and gender and although he had a wife (unconsummated) and a possibly fallacious mistress, he had been known to visit haunts known to be Molly Houses. I personally think Ian Kelly misses some of the nuances of Molly culture here, where such places were home to homosexuals and bisexuals, but also transexual, cross-dressing, role-play and other forms of kink. Foote could have been involved in any, all or non of these things.

I was pleased to see Christopher Smart pop up in this book a few times. Smart developed a show based on his ‘Mary Midnight’ character from his Midwife magazine. It was a little like one of Foote’s ‘tea-parties’, a riotous cabaret under the control of Smart in the persona of an old woman. Foote performed sometimes as Smart’s niece and even subbed in for Smart as Mary when Smart was ill. Ian Kelly uses this to further push the notion of Foote as gay, as Smart was accused of being a Molly himself (again I would suggest this conflates ‘gay’ and ‘Molly’ a little too much). He also says that Kit Smart lived as a woman for a bit, which when I read his source (Mounsey) really boiled down to a very weak supposition that he might have used his Mary Midnight costume as a disguise to avoid creditors. Foote took the crossdressing into one of his most successful roles, as Mrs Cole the Methodist bawd. He also used the name ‘Lady Pentweazle’ in one of his plays, a reference to Smart’s ‘Ebenezer Pentweazle’ and also refers to himself as Captain Timbertoe, a reference to his wooden leg but also Monsieur Timbertoe, a dancer with two wooden legs form the Mary Midnight revues. Despite Smart having all this influence on Foote, he isn’t given a little paragraph in the cast list at the end, which I was disappointed by. Later, talking to him about this at the Dr Johnson Reading Circle, he confessed that the cast list at the end was the publisher’s idea and that although he’d written many paragraphs on many people, it was they who chose who made the cut.

Despite a few misgivings throughout the book, I was informed and entertained throughout. Samuel Johnson said that he wished someone would write a diligent life of Samuel Foote and I think his wish has probably now been satisfied.