Review: 'Christopher Smart as a Poet of his Time' by Sophia Blaydes 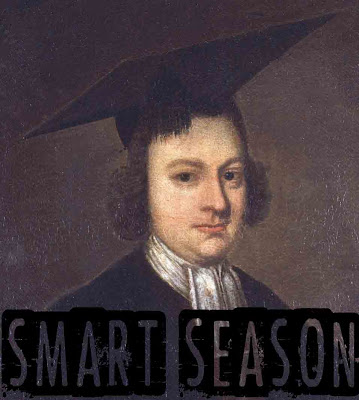 The late sixties seem to have been a good time to have been a Christopher Smart fan. In 1967, Norman Callan created the most complete selection of his works until the Oxford editions, mainly by Katina Williamson in the 80s and 90s. That same year Arthur Sherbo released his biography ‘Scholar of the University’, which cleared up many of the mysteries of his early life and his time in Mr Potter’s madhouse. The year before, Sophia Blaydes published ‘Christopher Smart as a poet of his time’ and I had the pleasure of reading it.

The book is quite a slim one and focuses principally on Smart’s religious poetry and ‘A Song to David’ in particular. It argues that both eighteenth and nineteenth century criticism misinterpreted the Song, gives reasons why this was, argues that its roots lie in his earlier poetry and presents an in-depth analysis of the poem. As such, it presents the Song as the culmination of Smart’s poetry, but as a result of artistic growth and development formed in his confinement.

The Song was not well received on initial publication, while it was reviewed by the larger periodicals, it was seen as having very good moments but to ultimately be a sign of a deranged and damaged mind. The Critical Review called it ‘a fine piece of ruins’. It was not included in later editions of Smart’s poetry and was mostly brushed under the rug of something unfortunate and embarrassing.

The nineteenth century took a different view. With Robert Browning declaring is as ‘straight from the soul’ and Dante Gabriel Rossetti calling it ‘the only accomplished poem of the last century.’ This huge praise was at the cost of his other work, with critics seeing the Song as an almost miraculous blaze of poetry and imagination only possible due to Smart’s madness.

Blayde’s argument in the book is that the Song is no way mad, or indeed any kind of aberration from eighteenth century poetic technique and Smart’s work had shown clear progression to the creation of the Song - and she argues it well.

First, she argues that Smart’s incarceration for madness, especially an ‘enthusiastic’ religious form of madness, was enough to damn the poem to his contemporaries. This is especially the case because the Song deals with the subject of praise to God and Smart was supposedly locked away for incessant praying. The critics at the time were expecting and looking for something madly religious in the poem and so they found it. This story of incarceration worked in exactly the opposite way for the nineteenth century critics, they looked for some of insane inspiration and found that instead. The truth, as she states it, is something both more prosaic and more inspiring.

She finds examples of Smart’s handling of catalogues and lists in his Seatonian poems and describes the Song’s use of such catalogues to be a clear example of his development of a technique which allowed him to accumulate lots of specific details (like the nectarine’s strong tint) into a larger picture. This cataloguing is also the key to ‘Jubilate Agno’ and various ideas in that are polished for the Song.

Her reading of ‘Jubilate Agno’ is particularly interesting. She sees it as a large, ambitious but ultimately failed work of art but saw its failure as the inspiration to Smart to make something more compact, more melodious and more accessible. This revised, tightened and improved vision being the Song itself.

While the early Seatonian poems are in Miltonic blank verse, the Song is a lyric. She uses Smart’s ‘Song to the Supreme Being’, the very personal poem he wrote after recovering from an illness, to show how Smart was liberated by the lyric form and used it to create the joy and musicality lacking in the stodgier, earlier efforts.

Blaydes also relates how Smart’s ideas are not particularly unusual or deviant to the eighteenth century. Despite his reputation for madness, he has a very contemporary love of reason and rationality. However, he departs from the Newtonian, Lockeian view of the material world and tends towards Berkeley’s ideas of immaterialism, especially the notion that our sense impressions come from God - which leads to Smart’s own notions of nature and the world praising God through the act of being perceived by him. Similarly, Smart describes the cosmos, then nature, then the gems underground following the Great Chain of Being - a notion that all life can be ordered from the simplest items of creation through to God.

What’s more, his poetical ideas stem from classical notions of poetry. Smart is very fond of the Horatian fondness for unusual words choices and uses, adapting it to his own theory of his word choice punching ‘impressions’ of ideas into people’s minds the way type punches letters onto paper. In her deeper analysis of the Song (which is beautifully done with a parallel text of the poem to follow along) she shows the clear structure of the poem, with its development of themes and sub-themes and its organisation along the numbers 3 and 7.

As for the weirder stuff…she blames the Masons for that and moves on.

The big take-away from this book for me was the overriding sense that the Song is a carefully and sanely constructed work, whose greatness comes not from mad or divine inspiration but from the hard work and development his period of incarceration gave him. That’s why the truth (of this is it) is more prosaic and more inspirational, Smart took his being locked away from the world and used it to develop an artistic vision.

I also appreciated how Blaydes found Smart to be rarely mad and concluded that if he ever was, it was only for short moments - a view very much disputed by next week’s Smart scholar Moria Dearnley.