Following on from my initial Leon Garfield roundup and its subsequent sequel, here his 'The Return of Leon Garfield - part two. Again, I am reviewing these in the order I read them. 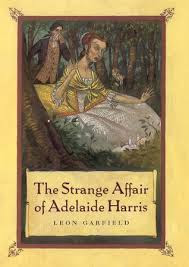 The Strange Affair of Adelaide Harris

Leon Garfield books have a tendency toward the dark and the uncanny. But this, the first of the two Bostock and Harris novels, is a comedy of errors. In this book, a small(ish) act by two schoolboys escalates through the personal failings of the characters around them before coming to an improbable yet satisfying ending.

Harris and Bostock are two schoolboy best friends. Harris is all brains and Bostock all brawn and after hearing about the Spartan tradition of leaving babies on hills to die, they link it to the Romulus and Remus myth and decide to try it on Harris’ baby sister. The stranded baby is found by the headteacher’s dashing son Ralph, and the arithmetic master’s daughter Tizzy, who takes it back to the school where the arithmetic master challenges Ralph to a duel. The baby is taken to the poorhouse.

The trouble finding the baby involves the creepy pseudo-private investigator Selwyn Raven, who meddles and complicates things by drawing up his own (false) idea of the baby’s disappearance. He’s my favourite character in the book and has an impulsive need to see the worst sides of everyone whilst telling himself he is really after the best.

The key to all the characters is that each one knows they are honourable and good but only by consistently lying to themselves.

There’s no point trying to run through the plot, it ticks beautifully and ties up well. What’s more, Garfield is at his best in terms of style. I didn’t pick any lines in particular but there are plenty of fantastic ones. The insanity of the characters and the way they justify their own selfish actions are gleefully portrayed. Also, Brighton comes out well. 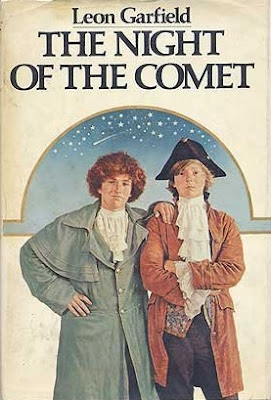 The Night of the Comet

It’s interesting that although Bostock and Harris instigate the farce in each novel, they don’t appear much in it.

This is even lighter-hearted than ‘The Strange Affair of Adelaide Harris’. Where that book had frequent (if comically inflated) musings on guilt and dark secrets, ‘The Night of the Comet’ is pure romantic farce. There are no dark secrets (or even guessed-at dark secrets) but instead has people talking at crossed purposes.

Each chapter is short and sparky, and each causes the plot to take a sharp left turn - enough of these left-turns lead the characters where they should be. It’s fun, would make a very enjoyable stage-play or a great mini-series. It’s a joyful marriage of sharp plotting and sparky writing but as such is quite hard to review, it works well, achieves its purpose and that’s it.

The best character was the Irish glazier, whom love has turned into an angel. He’s been searching England from Liverpool down until being washed up in Brighton in search of his runaway love. She’s there of course, but his fondness for all women, and a few misunderstandings make their renunion a little more shaky then it could be.

A fun slice of provincial eighteenth century romance, a tight farce and probably Garfield’s most airy and fun book. 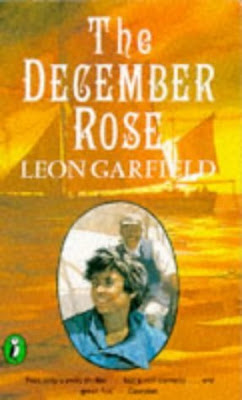 This book follows the general formula of Garfield’s novels. A boy of poor means accidentally falls into a larger mystery. As the secretive net tightens, he finds allies, avoids enemies and eventually brings all the secrets into the light. The book also follows Garfield’s interest in morally grey or misguided villains and Inspector Creaker in this book is one of the best.

Barnacle is our young man, he is an animalistic chimney sweep, who overhears a secretive conversation when lurking up a chimney. Falling into the room he grabs at objects to throw and ends up running away with important evidence in his pocket. The book has the interesting (and slightly odd) notion that once he has the property he accidentally steals, he starts to move from animal to human - a function of property itself.

Barnacle bumps into a big man - not big exactly, it’s as if if what you see of him is the visible sign of a much larger person. This is Mr Gosling (again with the bird names) and he is the rentee of a barge. Taking in Barnacle leads him and the other bargees into danger.

The rest of the book is a thrilling affair, delving into the notions of spies and secret policeman. Seemingly innocent actions like peeling an apple or humming a song are imbued with special and eery significance. The thriller element is tighter in this book than most other Garfield works and I was pulled along at a breakneck pace.

The book not only thrills but it makes interesting points about class and the importance of the everyman. A conspiracy of lords and government is infiltrated by chimney-sweeps and people who barge manure down the Thames. There are also points about servants and masters. Creaker and Barnacle are the servants of unfair, weak masters but Barnacle rises above it by running into Gosling - the question is whether Creaker will let morality overcome his own loyalty.

Of course, the writing is always brilliant. There were many examples but I’ve picked out the description of a low-dive pub which ‘poured light into the night like a disease.’

I shall be looking at his completion of 'Edwin Drood' soonish.