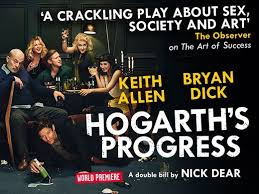 Recently, I took a jaunt to the Rose Theatre in Kingston to see the double bill of ‘The Art of Success’ and ‘The Taste of the Town’ known collectively as ‘Hogarth’s Progress’. 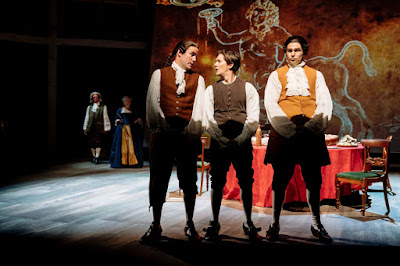 The first play was a revival of one performed in 1986. It stars Bryan Dick as Young Hogarth, just married and completing his first big success with ‘The Harlot’s Progress’. He goes on a big night (afternoon?) out, paints a killer in Newgate Jail, is thrown mostly naked out of a prostitute’s house and returns home to his own home to be terrorised by the escaped killer who doesn’t like her portrait.

My principal note for the play was ‘that spun in some strange directions.’  I was expecting something of a biopic but this was something far stranger. Most strange was the flashes of nightmare, mostly shown on projections around the set. These included Hogarth’s wife with a pair of shears about to emasculate him, nightmare versions of creepy women, a poxed prostitute and -  most strangely - the male characters trying to rape Hogarth while taking selfies with a smartphone.

There’s an obsession with filth in the play, or at least an obsession with shocking the audience with filth. A Lord enjoys some sexual act that involves him caked in blood (his own?); Queen Charlotte enjoys humiliating de-facto Prime Minister, Walpole and humping at his naked bottom; and Hogarth loves being farted on, shat on and pissed on. I find the whole ‘tee-hee prostitutes, pox and dirt’ eighteenth century to be something of a cliché, though maybe it hadn’t been as played out in 1987.

It’s clear that the play is not interested in telling Hogarth’s life but in using his life to say…something. What? I could never decide. There’s stuff about censorship, one of the sub-plots being about Walpole’s pushing of a censor’s bill, especially to silence Fielding. There’s a theme of who owns an image, with the criminal hunting Hogarth for his picture and Hogarth trying to convince Walpole to create a copyright act. There are themes of artistic integrity and selling out, whether an audience should be charmed or shocked. Finally, there were themes of the eighteenth century’s simple views of women - represented by a virginal wife, a prostitute and an unhinged murderer.

I enjoyed Bryan Dick’s Hogarth. He was fierce, pathetic and interesting, though less a battling pug at this moment and more a weasel. I was less keen on his wife Jane. The real Jane Hogarth ran off with him against her family’s wishes and so can’t have been as prim as she is portrayed here. Robert Walpole is a played as gibbering idiot who has the ability to walk into people’s houses in a strange, almost dream-like manner. I was most disappointed with the portrayal of Henry Fielding, played as an idealistic, naïve bumpkin, hardly the writer of ‘Pasquin’ , ‘Tom Jones’ and the founder of the Bow Street Runners. He was mainly there to be the idealism to Hogarth’s cynicism but both seems to have been equally idealistic and realistic.

I enjoyed parts of the first play but had no real notion of what it is supposed to be about and found it chaotically determined to shock more than entertain. I also didn’t realise it was supposed to be a comedy. 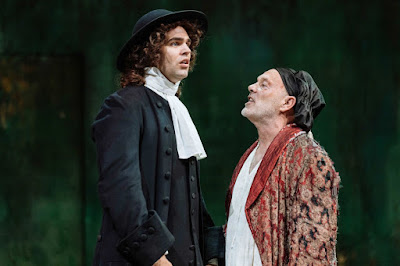 The second play is a gentler affair, even if Hogarth himself is less gentle. Where the first was a slightly histrionic, overplayed attempt to shock, the second is essentially a sitcom episode . Welcome to Chiswick where poor Jane Hogarth has to put up with her grumpy husband, please her demanding mother and entertain quirky neighbours like David Garrick.

In this episode Hogarth is reeling over bad criticism, especially a sharp comment by former antagonist, Robert Walpole’s son, Horace. Hogarth and Garrick go for a drink and insult a war veteran. Hogarth then goes alone, breaks into Strawberry Hill and confronts Horace Walpole over his comment. Returning home he is distracted by a prostitute and beaten up.  Meanwhile, Jane has to take her Lady Bracknell/Lady Crawley-esque mother on a shopping trip. There they are laughed at by bluestockings and Jane’s mother dies.

Keith Allen looks like old Hogarth and I he clearly enjoyed playing the disappointed full-mouthed old man that came across in Jenny Uglow’s wonderful biography of him. I also enjoyed the gags where no-one had read ‘The Analysis of Beauty’ or appreciated his Sigismunda picture. Jane was probably the centre of this play, she was tired and put upon which had us feeling for her wasted life. I loved the portrayal of Garrick, it was a little obvious to have him vain but he was also as likeable as his contemporaries described and I loved his death of Macbeth sequence. The extremely mannered and bitchy Walpole was also exactly as I imagine him and it was gratifying that his best laughs came from lines in his letters.

This second play was more contained than the first and the comedy had space to breathe. However, the time went a little slower and I wished for the energy of the first. Similarly, it had some very entertaining moments but they never built to much more.

As a double bill, this was less Hogarth’s Progress but more Hogarth’s Peregrination - a meander round scenes, some enjoyable and some less but with no real point at the end. This is not to say I didn’t enjoy myself, I did but I was hoping for more. It was, however, a better fictional representation of Hogarth than the very limp novel ‘I, Hogarth’ which I don’t hesitate to not recommend. If you want your Hogarth fix, you should probably go to his house and see some prints, go to Sir John Soane’s to see some paintings or read Jenny Uglow’s huge but involving biography. There’s also a pretty decent fictional Hogarth in a Channel Four mini-drama called ‘The Harlot’s Progress’ where William is played by Toby Jones.