I have tried to make the trip to Kenwood House three times. The first, I was distracted by Hampstead town, its charity shops stacked with good second-hand books, and the general prettiness of it. The second I was distracted by the beauty of the Heath and wandering over its rolling hills and shady woods. The third time I was completely distracted and ended up walking to Belsize and then onto Camden Town.

This time I was determined, yet I did get a little distracted. In the Golders Green area of the heath, there’s a small zoo which contains some ring-tailed lemurs. Always my favourite of the lemur family, I found myself having a nice chat with them. I did, however manage to reach the house.

Most luckily, I reached the house in time for the two-o’clock guided tour. This was given by Phil, who seemed like he could answer any questions about anyone in the house. It was remodelled in 1764 for the Lord Chief Justice, William Mansfield. Both inside and out were designed by James Adam, including furniture and fittings.

The outside features two impressive columns, these look like stone but are in fact wooden. As Phil said, ‘Adam wouldn’t waste a client’s money’. We entered the reception room, which also doubled as a dining room. This seemed strange to me but seeing as the house was originally a weekend retreat, I guessed that it was a faff that could be put up with. 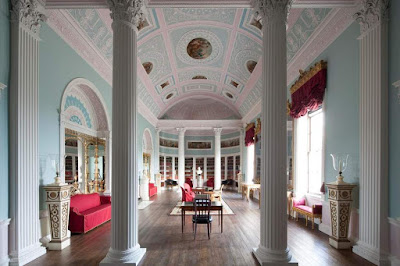 We were led through the levee waiting area to the library, or the Great Room. It was great. A cavernous expanse painted in baby-blue and baby-pink with curved ends that amplified music for dances, which were had on a sprung floor. We were told how the large glass windows were a new technology and with the floor-to-ceiling mirrors, made the room dance with light. Incidentally, when the house was sold, the mirrors were so heavy it was easier to sell them with the building than remove them. The library steps were an interesting contraption, made from mahogany, they could be folded back into a table. The book collection itself wasn’t all that impressive though.

The house was the home of six Earls of Mansfield and one Russian prince called Michael Mikhailovich before being sold off, knocked down and turned into villas. Lord Iveagh of the Guinness family didn’t like this idea, bought the house, filled it with his art collection and gave it to the National Trust.

This collection is impressive. There were Van Dykes, Gainsboroughs, Reynolds and Romneys. I loved the Rembrandt self portrait as a broken old man and I wasn’t the only one, there’s a visitor who spends a bit of time with him every day. Above it is a Reynolds self portrait in the same stye. in that same room sits Vermeer’s ‘The Guitar Player’, who looked out at us happily.

One room had a painting by Lunar Men favourite, Joseph Wright. It shows two girls, in dim candlelight, dressing a cat. Our guide told us that he found that one more disturbing the more he looked at it. 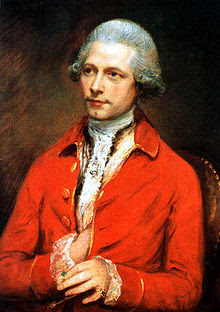 Another room featured the portrait of John Joseph Merlin, the inventor of the in-line skate. He’s an interesting man, once noted for going to a party in his skates, playing a violin and crashing into a priceless mirror. He was also an inventor of automata, including the famous mechanical swan. He had been piano tuner at Kenwood and there were two of his inventions; one a wonderful clock that shows the time in a digital form as well as on a clock face. The other was a self-propelled wheelchair that could turn 360º which he whizzed around during a masquerade ball. I want to know more about him.

One of the things that struck me about the collection was the amount of portraits of courtesans and other women. There were three Romney portraits of Emma Hamilton, including the one where she is represented as a simple spinner. There was also a portrait of Kitty Fisher as Cleopatra, dissolving and drinking a pearl - most likely as a reference to when she ate a twenty-pound note on a sandwich to chastise a man for paying her too little.

Reaching the end of the tour, I went upstairs where there is a collection of 16th-17th century portraits, including a number of monarchs. These were a little flat after the later portraits I had seen downstairs and I left the house having spent a very enjoyable couple of hours.