'Johnson & Garrick, A Friendship in Constant Repair' An Exhibition 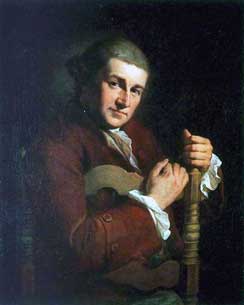 Dr Johnson’s House is always worth going to but they are always finding new ways to lure me back. This new reason is the current exhibition, ‘Johnson & Garrick: A Friendship in Constant Repair’, which is part of the entry ticket and is displayed throughout the house.

The Garricks lived in Lichfield not far from the Johnsons and had enrolled their sons George and David in Johnson’s school in Edial Hall. This was not a hugely successful venture, numbers vary but it seems that Johnson had up to seven pupils, and not at the same time. Johnson and David Garrick set off to London together, sharing a horse and taking turns to ride it. They both had theatrical intentions, Johnson to get his play Irene produced and David to become an actor. David was rather more successful.

Where Johnson took twenty years to really gain success, David Garrick worked in a wine business for four years before finding overnight recognition in a production of Richard III. Audiences were delighted with his emotional and more naturalistic acting style and many artists, including Hogarth, rushed to paint him.

Six years later, Garrick took over the license of Drury Lane, getting Johnson to write a grand prologue and proceeding to reform how the theatre worked; stopping people being able to come in halfway through to watch the third act and the afterpiece, he took the audience off the stage and other measures to increase theatre’s respectability.

He married a German dancer, where they settled together in a mansion in Twickenham. In 1769 he created a celebration in Stratford to celebrate Shakespeare’s two hundred (and sixth) anniversary. The event was a total washout but was still one of the great set-piece events of the eighteenth century.

His relationship with Johnson was interesting - Johnson had an almost fatherly relationship with him and all Johnson’s circle knew that as much as Johnson dismissed his acting successes, he wouldn’t let anyway else criticise Garrick. It was one of the many faux-pas that Boswell made when he first met Johnson.

I like their teasing relationship. Garrick did impressions of Johnson and told stories of Edial Hall, whereas Johnson laughed at Garrick’s overused and wrinkled face. When Garrick died at sixty-two, outlived by Johnson who said that his death ‘eclipsed the gaiety of nations, and impoverished the public stock of harmless pleasure’. A lovely way to be remembered, certainly. 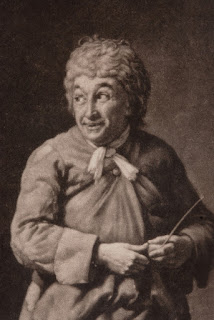 Now - for the exhibition. Johnson’s House has mainly got together with The Garrick Club and Lichfield’s Johnson Birthplace Museum to assemble a collection of pictures and objects that tell the story of the friendship, room by room.

My particular favourite objects include receipts signed by Hogarth for prints that Garrick bought, including the Richard III one and his Four Stages of Cruelty. There was the original advertisement placed in the Gentleman’s Magazine for the Edial Hall School, which I loved for its positivity and (misplaced) optimism.

Personal objects of Garrick’s included his favourite snuff box, which included a portrait of his beloved brother George in the lid. From the position of a former snuff-taker, I did think it was a rather big box, probably for table use or something similar. There was also the horn Garrick used to powder his wigs before a performance, an item which made every viewer smile when they saw it (and I watched).

There were also a number of brilliant pictures, some I knew and some I didn’t, including a Zoffany which I thought looked strange due to Garrick’s placement in the frame. The information cards also told the story of their friendship well.

Dr Johnson’s House is a must to visit as it is, but it is now crammed with even more interesting things to see and will host a number of events and talks… so, even more worth a visit.