Review...? My Trip to the Opera ENO 'The Barber of Seville' 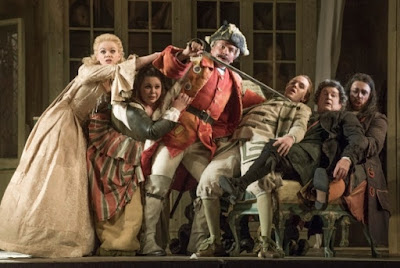 I have a confession - I’ve never seen an opera. In itself, I don’t think this is strange, I hardly know anyone who has seen one but seeing as I am professing myself a huge eighteenth century fan and I have never experienced this most eighteenth century of entertainments - it's a gap I felt I needed to fill.

I decided to rectify this by grabbing myself a ticket for the English National Opera’s revival of an English translation of ‘The Barber of Seville’. Now, this is isn’t exactly an eighteenth century opera (it was written in 1816) but it was based on the third of a trilogy of eighteenth century plays about a man called Figaro, a barber and general getter-together of men and women.

What I found most surprising about the opera, was that there were hardly any songs. I was expecting to go home humming the tunes and really the only one I remembered was the Figaro aria. As a fairly frequent watcher of musicals, I was expecting songs linked with music rather than a run of music. It was odd, people were constantly singing, there was melody but no tune.

I did really enjoy the music though. The harpsichord is one of my three favourite instruments but I don’t think I have ever heard one live until this opera. It has such a lovely feel to it, like honey running down a ridged surface and it was delicious to hear.

In terms of story, it was a pretty standard plot. Rosina is a beautiful woman kept in close confinement by stuffy old senex Dr Bartolo. She is in love with count Almaviva and Figaro, the barber of Seville helps him get the girl.

Dr Bartolo was brilliantly pompous, Almaviva was a little bland in himself but had great fun with his disguises, Rosina was sharp and feisty and Figaro…did very little, but boasted that he is doing so much more.
I very much enjoyed the jokes - there were some very funny bits of staging with people hiding in cupboards and such. There were even some jokes about opera itself, when fuddy old Dr Bartolo sang a song in the style of operas of his youth and so sung in an absurd falsetto. Obviously, he was ‘doing’ a castrati, and the effect was enjoyably daft.
As much as I enjoyed the story, characters and even music - I was as aggravated by the opera as I was charmed by it. I have a love/hate relationship with Monty Python. There are elements of their humour that make me laugh a great deal - especially their silly side, but I have an extreme hatred for the side of their humour that farts and tarts about. The best example is in ‘Life of Brian’ where Brian is trying to escape by buying a fake beard and Eric Idle keeps getting in the way with irritating asides about haggling. That’s how I felt watching this opera.
At one point, the story had got to its halfway part, all the cast were on stage and the full level of carnage was reached. Time to run the curtain down…but no. A man started singing ‘Like a blacksmith with an anvil, my head is pounding, pounding, pounding.’ This song was then taken up by another character, and another, and another - till they were all singing about their headache. For one, I didn’t believe they all had a headache. For a second, if they had a headache, stop singing and lie down. But for the third - why make their headache the thing to leave the audience with into the interval?
Presumably, the repetition exists because the audience had to understand what was happening. In a noisy, chatty theatre with poorer acoustics and no A/V equipment, it makes sense to repeat things a number of times. Although the director did do his best to make a joke of the repetition and general time-wasting - it didn’t diminish the fact that there was so much of it.

I went last Tuesday, a good day, as I got a pretty decent seat for ten pounds. As frustrating as I found it, I also had could see something loveable about the whole silly affair. I would certainly try again - any suggestions?