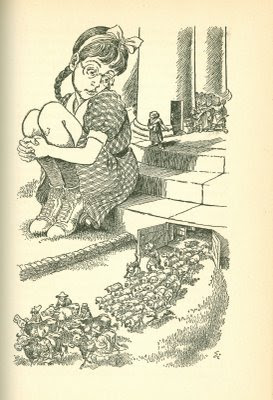 I read TH White’s ‘The Once and Future King’ in the summer and enjoyed it immensely, so much so that I have been buying up copies of his books and gobbling them down voraciously (that being one of the reasons I am writing less then I did). The package containing ‘Mistress Masham’s Repose’ was posted through my door just as I was about to leave to visit my parents. In my back was Sarah Fielding’s ‘David Simple’ but reading the first line of this book, I shoved it in my bag and head off to the tube station.

By the time I arrived at my parent’s house, I was a quarter of the way through. I reckon this book has the finest first chapter I have ever read, it is perfect. Maria’s description is perfect, from her eyes like shining marmite to her loving heart and the promise that she is tough, though with a mistrust of cows, is so clear to me. The description of her despicable guardians, the Reverend Hater and Miss Brown calculate the necessary dislike of them but we are encouraged to believe that ‘this precious pair may have been trying to do the best they could, considering the people they were’. I love the humanity in that, even pantomime children’s baddies need consideration. 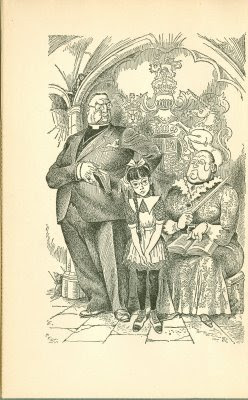 This brilliant set up over, we move onto the plot. Maria is an orphaned heiress living in the crumbled ruins of Malplaquet Palace in Northamptonshire who spends her free time wandering the overgrown eighteenth century garden, filled with follies and prospects in decay. It is on one of these trips that she goes into the little island in the middle of a man-made lake to the pagoda known as ‘Mistress Masham’s Repose’. There she finds a colony of exiled Lilliputians who were snatched by Gulliver’s rescuer and escaped his traveling circus. The rest of the plot then consists of her trying to keep them away from her guardians and with the help of The Professor, to understand them. 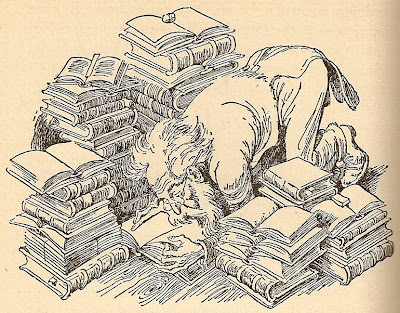 The Professor is presumably based on White himself and like Merlyn before him is probably calculated to appeal to my own sensibilities. He is the main moral voice of the book, helping Maria to see that her physical dominance of the Lilliputians did not imply any other kind of dominance. He is a bookish hermit living in poverty, who would rather read a book then go on adventures and longs for nothing more than a penny fish-hook so he can cook fish from out of the pond. He notices that ‘whenever something unusual turns up, you are immediately confronted by a moral problem’, declares that ‘It is better to think about cucumbers even, then not at all’; and when he feels barbarism creeping upon him, touches a book to ward it off. I liked him a lot - though I didn’t like the few chapters he had to himself as he was trying to rescue Maria, as I couldn’t believe that his mind would get distracted by discussions on Latin words, or by looking up the origin of the word ‘bloater’ when his young friend was in danger. I did like like his way of dealing with locks, which was to destroy the bolts on the other side of the door that held it on.

Like ‘The Once and Future King,’ the importance of thinking and the humanity it could bring (rather like in the book on Johnson, ‘Passionate Intelligence’). One of the disparaging things said about the guardians is that, ‘they had a few instincts about money, and about appearing respectable, but for many and many years, they had not any thoughts on real ideas at all.’ Another big theme in both books is the importance of right over might, it is easy to domineer the Lilliputians, but better to leave them be.

The book is chockfull of interesting hat tips to the eighteenth century and as well as Swift and Gulliver; Pope, Arbuthnott, Johnson, Boswell, Horace Walpole and Lord Hervey all get mentions. It’s hard to tell what I would have made of this book as a child, but as I am now, I greatly enjoyed it and would encourage any right-minded people to dig a copy out and enjoy the adventure.