Review: Oliver Goldsmith's 'A History of the Natural World'.

After reading The True Genius of Oliver Goldsmith, I had a fancy for a little more of the man and his writings. The God of Books must have been smiling down on me as I found a Goldsmith book at the fair run by the school I work at. The book cost 5 pence and it is a copy of Goldsmith’s History of the Natural World, much abridged but put together with some absolutely gorgeous water colours of the animals.
I haven’t sat and read it through, I did try but there wasn’t enough space between the seats on a bus to open it and it is very heavy. However, I have had many long picks through it and I find the book utterly charming and lovely.

Pictures aside, there is the joy of Goldsmith’s writing. Although much of what he wrote in this book was cribbed off other people, he still managed to make the prose his. It is easy to read, quick, active and he has a brilliant way of anthropomorphising animals. Even more entertaining for the modern reader is when he uses some less than kosher information, such as the fact that Gorillas like to steal human women for their own pleasure and when angered ‘make use of clubs for defence’.

Superstition is not beyond Goldsmith either, he talks about the ‘hideous note’ of the owl and talks about the beliefs that they signal death. I particularly enjoyed the rant he goes into about dolphins, a creature that in this book are found in the section labelled ‘fish’. In this, he moans about how many fables and stories there are about dolphins saving people. ‘Scarce an accident could happen at sea but the dolphin offered himself to convey the unfortunate to shore’. He doesn’t understand why they are given this character as they are ugly and completely unloveable, thus revealing that he has probably not ever met a dolphin.
Goldsmith then goes onto talking about sharks and their power and voracious appetite. He talks about how sharks would ‘unpeople the oceans’ were it not for the fact that the shark’s ‘upper jaw projects so far above the lower’. This made me laugh, as in the case of jaws, Goldsmith could well be describing his own preposterous fizzog. 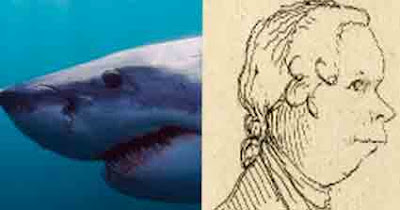 I like how Goldsmith’s own prejudices litter the book. A cat is ‘a faithless friend’ and the ‘only animal of it’s tribe whose services can more than recompense the trouble of his education’. A dog however is, ‘the most intelligent of known quadrupeds’ and is ‘more faithful than the most boasted among men’. Goldsmith does not seem to be merely writing for money, he reveals some genuine love of animals, celebrating the decline of cock-fighting in his age and suggesting a reason why they are such fierce fighters, he reckons it is because a cock is ‘salacious’ and must defend his harem against other cocks. I can picture him skimming his source books and becoming very interested in what he read.
(I remember reading some Goldsmith somewhere, where he is hiding from creditors and so has to spend all daytime in his room, where he does amateur natural history on the spiders that share it with him).
A reflection of my own animal prejudices is that I have read less of the fish and insect part of the book, but all of the birds and mammals. The scorpion is apparently ‘infinitely more hideous’ than the lobster and he finds flea bites to be worse in England than the continent, and blames the weather for it.
It’s hard to know who this repackaging of the book is intended for. I assume that Goldsmith’s words are mainly being used to be a way of carrying the pictures. When it was produced, it was a readable and fascinating description of the private lives of known animals and an insight into others which were far more exotic seeming than a modern person with access to David Attenborough can ever really imagine.
But now the text is less informative, and it where Goldsmith veers into his own ideas that brings the book to life. As always, Goldsmith can be informative, funny and even a bit touching, as his description of a dodo testifies.

“This silly simple bird makes great weight of it’s slowness, appearance of stupidity it can be easily caught and is good and wholesome eating. Three or four dodos are enough to dine a hundred men”.
Goodbye dodo.
Yours