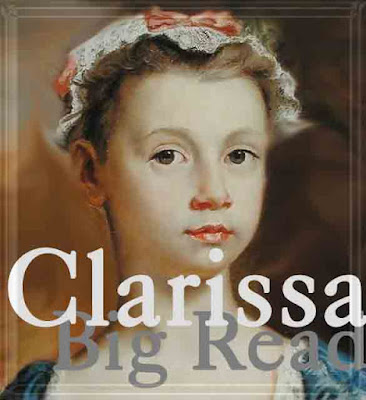 I have been going on a journey recently. In January I started Clarissa with a group of other foolish readers. Many have fallen out of the race. Many are hobbling along. I was behind but have grit my teeth and ploughed through to mid-June and I have to say, my opinions of the book are not so very different from the first.
Clarissa tells its story with utter commitment to the daily psychological reality of the story. It forces you into people’s heads, into their hearts and souls and makes you feel rather dirty doing it. Especially now we are spending more time with Lovelace than we have before. His letters feel clammy and uncomfortable as a reader and I can never believe that he is being totally honest, even in his letters.
There have been many times in this read that I have yearned that Samuel RIchardson had an editor (I even wanted to tell him the other week) but then I remember that he did have an editor, he had many. Richardson actively sought people who would make his work shorter but they all said that he should write longer.
His publisher told him that in his style, ‘ where verbosity becomes a virtue’, because it conveys the patterns and repetitions of real life. He gathered huge salons of women with whom he tried to edit the work, but everyone kept telling him to keep it long and make it full of redundant letters, so he did and the book was a huge success.
Sometimes I feel I should just give it up and read Shades of Grey but then a little line will pop up and keep me going.
The other #Clarissa readers are here, go cheer them on.