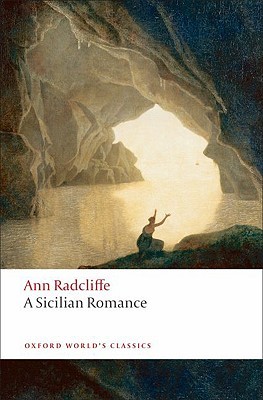 A Sicilian Romance was Ann Radcliffe’s second novel and the elements that went into The Mysteries of Udolpho aren’t quite as integrated or fleshed out.

The story claims to be of two sisters of two different temperaments. Emilia is quiet and subdued in her passions and Julia is less controlled but more vivacious. There’s not really any need to remember Emilia though, she does nothing, says nothing and has no impact on the plot - Julia will be our main innocent plunged into a journey of castles, ruins, banditti and bad men with power.

Chief of the bad men is her father, Marquis Mazzini. He harried his first wife to death, married a new (and evil) stepmother and took her and his favoured son to Naples, where they yummed it up and had a good time. The two daughters were left in Mazzini’s old castle in the company of a few servants and their tutor Madame de Menon, where they grew up in peaceful seclusion and rational entertainment. This quiet is burst into when the Marquis, his wife and the son come back to the castle to celebrate the son’s coming-of-age. This son, Ferdinand, is not such a bad lad and he also brings his friend, the dishy Hippolytus, who falls in love with Julia. This is a problem, because an old and nasty duke has his heart set on marrying Julia and her father has his heart set on using the marriage to gain influence.

From then Julia has to avoid being married, whether she is locked in a tower, fleeing through forests or hiding out in a convent. Not that the convent is the best place to hide, the abate who runs it is extremely conceited and unhelpful, meaning that soon Julia has to run from a Father as well as her father. There are caverns and catacombs, trapdoors and locked doors, ruins and shipwrecks - and it being a Salvator Rosa inspired environment, banditti everywhere.

Radcliffe ticks off many of the expected elements, there’s ghostly goings on with a (mostly) logical explanation, there’s unfair imprisonment and a genuinely creepy expedition into a bandit camp that includes torture and a rather horrific body-dumping vault.

Even though character is one of Radcliffe’s weaker skills, I did find a few of the characters in Udolpho interesting or engaging in some way, that wasn’t really the case here. We are told Julia is vivacious and winning but never really get to see it. The villainous stepmother doesn’t have the opportunity to do anything actively villainous, even though she is the cause of villainous actions in others. The Marquis is also a rather blank slate, so the extremity of his actions don’t feel grounded in a personality, even a disordered one. I suppose if I were to name a favourite character, it’d be Madame de Menon, but she’s mostly defined by her steadfast loyalty and her listening skills then anything particularly dynamic.

This lack of character was exacerbated by the rather shifting point-of-view. I remember that the narrator stayed pretty close to Emily in Udolpho, giving the reader the same experiences she was and putting her in the same position of dizzy ignorance. A Sicilian Romance strays from Julia sometimes, following nasty-duke as he tries to track her through the island, or having a brief check in with the Marquis - this is contrasted with the times someone just suddenly turns up at the right place with a short narrative to explain the coincidence. It makes it an uneven read.

However, some of the scenes were gripping and the mis-en-scene interesting. I liked the castle with the mysterious southern section (though I did guess the central mystery of the book fifteen pages in). I also like the casual references to people being burned alive by lava and the constant stream of bandits and mercenaries that made every trip treacherous.

I suppose what I enjoyed most was the rudimentary elements of Radcliffe’s later novels and others inspired by them, seeing those parts laid pretty bare before they became blended more tastily together. It’s like seeing some pretty decent preparatory sketches to a more fleshed out full painting. Probably one for enthusiasts.