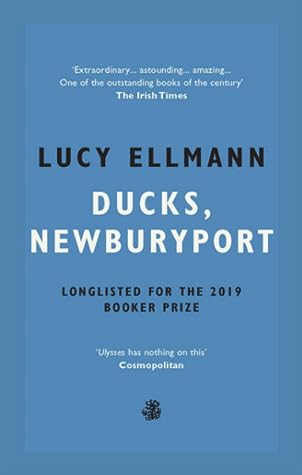 I picked up Ducks, Newburyport as a book to challenge me and it certainly did that. Most of its thousand pages is a long, unparagraphed stream of consciousnessseperated only by commas and the phrase ‘the fact that’. Occasionally, this is broken up by the story of a lioness having, losing and looking for her cubs told in a standard omniscient perspective with properly formed sentences. What was I to make of this book? Why was it told in such an obtuse and peculiar way?

There was one particular pointer. At the end of the book lie two appendices. The first was a list of acronyms which wasn’t as helpful as I thought it may be, the meanings of the acronyms turned out not to be very important to the text. The second was a selection of quotes. The first quote in that section was part of the ‘cat Jeoffrey’ portion of Christopher Smart’s Jubilate Agno. I’m a huge fan of this poem and Christopher Smart in general and the inclusion of this in the quotes, and in the book also, pointed me in a certain direction. The poem was written while Smart was incarcerated for an unspecified ‘madness’. It started at as a religious poem, a hymn to all creation which gathered all plants, animals and minerals together with all people, knowledge and experience to praise God. As the poem went on, Smart used it as self-therapy, as a diary, as a way to discuss moral and scientific questions, as a way of remembering his friends and also as a way of counting down his days. It became an encyclopaedic, rambling and dense gathering of everything in Smart’s head and that explains the sheer length of Ducks, Newburyport. The narrator similarly chronicles everything she sees, her worries about the climate, memories of her family, films, books, advertising slogans - the book dramatises exactly how much ‘stuff’ is in her head and while this point could have been made in far fewer words, it couldn’t have been made as resoundingly. Her mind is so full. (There’s also the mirroring of the novel’s ‘the fact that’ phrase matching Smart’s ‘let’, ‘for’ phrases.)

This fullness also explains why this stream of consciousness novel does not read like an actual stream of consciousness. I’ve often seen this in that kind of novel, I had a fever when I read part of Ulysses and even then my mind wasn’t as jumbled and discursive as the book was - and Ducks, Newburyport is even more jumbled than that. For a while I thought maybe I was reading a stream of unconsciousness, the things bubbling under the narrators recognised mind but I noticed she kept correcting her thoughts. For example on page 94 she talks about going to a crematoria to collect the ashes, then birds migrating, then ashes and has to consciously say ‘people, I mean, not birds’. This is often done many times for comic effect but it shows the text is supposed to be her consciousness. Then why does she go on free-associative trails, rhyming and echoing words, often without meaning? Is this supposed to be normal or something strange about her? I think it was yet another way of ramming the idea of her mind crammed with stuff, and much of it useless to her.

To compare the narrator and the lioness, the animal has a simple life with simple motivations whilst the narrator is so crammed with the complications of being a self-conscious animal in a complex world that it interferes with her life and relationships. Which brings us back to the manic stream of consciousness, self-consciousness is the enemy.

This makes the book a tough and at times irritating read but that irritating quality is dictated by the point it is making and which match the manner of it’s telling. Or it would, if it wasn’t for the plot. By the end of the book, Ducks, Newburyport has become a conventional narrative (if not exactly told in a conventional way), there are even heroes and villains, examples of foreshadowing, set-ups and pay-offs. When I got to the end of the book I felt a little cheated, that I’d read a rather average story dressed up in outlandish clothes but I changed my mind when I thought about it a little more.

A book I love that never gives up on its weirdness, or gives in to standard plotting is The Life and Opinions of Tristram Shandy, Gentleman. Though there are events, it refuses to take the idea of plot seriously at the beginning and still does at the end, laughing at any readers who expected it to wrap in a neat bow (as it could be argued Ducks, Newburyport does). There’s a point where it maps out its ‘plot’ in a series of squiggles. Duck’s Newburyport also has a map, of the lioness looking for her cubs and she goes in a spiral. The book is crammed with spirals as pages circle around events and phrases circle around each other. The plotting of the book also functions as a spiral, being wide and loose at the beginning but getting tighter and tighter. At first there are mentions of real life plot-worthy events happening around the country, then made up plot-worthy events happening in the area of the book, then to other characters in the book and finally to the narrator. The plot of the book spirals closer and closer until the narrator finds herself in a generically plotted book.

So, in terms of structure and style, this is a very clever book but I couldn’t say I found it wholly enjoyable. Although the increments in plot fit the structure, it did leave me feeling dissatisfied by the end - I almost feel the telling of the story should have become more standard as the plot did as I was left with a standard plot told in a weird way. Despite finding some of the narrator’s parts funny and there were some great descriptions (the old people in the mall on page 589 for example), I did not find her great company. She was so dour, so tired of life, so querulous and so reactive, so self-loathing that she made me feel rather exhausted and anxious. I also found ‘the fact that’ was never a phrase that didn’t call attention to itself or sometimes confuse the things she was saying. I found it a book for more fun to think about than to read.