The Revenge of the Return of Leon Garfield (Part One)

A few years ago, I discovered Leon Garfield and since then, have been working through his work. The pattern is the same, I pick one up, enjoy it immensely and before I know it, I've read five or six of them. Having lots of time on my hand due to coronavirus lockdown and being drawn towards shorter books, I got through rather a lot of Leon Garfield - thirteen of them. Here are the first batch of reviews... 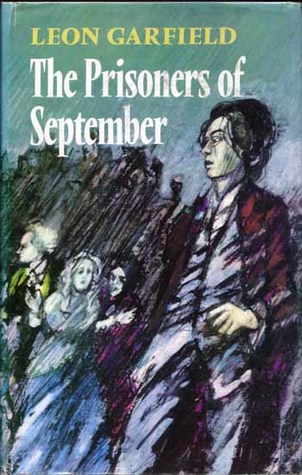 Prisoners of September (aka Revolution)

As much as a love Leon Garfield, he does have a formula. The Prisoners of September steers us away from it a little and aims for something a little different. Instead of one young boy about to make his way in a difficult world, sometimes with the aid of a kind mentor, we have two young men and no mentors as such - no effective ones anyway.

The book is set during the early days of the French Revolution and our two young men are Lewis Boston, the flashy son of a nouveux riche wine salesman and Richard Mortimer, the brooding son on an old, wealthy, family. The two boys are friends but very different, Boston wanting to enjoy the fruits of the world and Mortimer wanting to change it.

The book begins when Boston saves a woman from a carriage who happens to be a French countess but also the possessor of secrets. Strangely, although this character is important to the beginning of the book, she dies off-page and doesn’t have much to do with the narrative and seems like a loose thread in a book that isn’t as tight as I expect with Garfield.

The climax of the book happens when both boys during the September massacres in Paris. Boston has gone on his first trading mission and Mortimer has been living there and aiding rebellion. The scene of the two of them outside Le Force prison is full of energy and emotion, the clear tent-pole that supports the rest of the book, the rest of it dealing with the fall-out of that moment for the two characters.

All of this makes me seem slightly disparaging of a book which was well written (as always) and kept my attention at a time when my attention has been prone to wander. There was a fine comic character in the soldier Bouvet and his longing to go to England and see ‘Umpshire. I also very much enjoyed the spymaster with his fine white gloves and corrupted skin, though he wasn’t as well developed a baddy as some other Leon Garfield books, (I’m thinking of Creaker in December Rose, in particular).

The best character was Henrietta, Lewis Boston’s plain but intelligent sister. She’s the sharpest character, moaning about how Tuesdays only exist to stop Mondays and Wednesdays crashing, describing a dress as “leaving nothing to the imagination but why.” She’s also a daydreamer who reads too much and declares that even ditchwater is more interesting than Tuesdays, as ditchwater could be a place where the body of a beautiful woman is found, thus sparking a mystery.

She’s also one of the characters in which the main theme of the story is played out, idealism vs reality. Each of the main characters in the book has their idealism tested in some way and the characters that come out best are the ones who are prepared to be be flexible with their ideals and take the world a little more as it is. Sometimes a depressing moral for a book, but not an unfair one I feel. 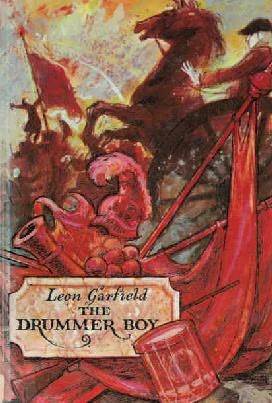 Charlie Sampson is the drummer in his regiment. He is young, attractive and serves as a source of pride and encouragement for his regiment, whom he thinks of as his ‘scarlet men’. One day, they go into battle on a hillside, a number of well placed artillery shots split the units apart, French soldiers come out of the trees and all is chaos. A little later, Charlie wakes up to find almost everybody dead. Those left behind are skulking about, robbing from the dead, the sort of lowlives he had joined the army to escape. Out of necessity, he becomes one of them.

The main ones are James Digby, who played dead to survive the battle and longs to be back with is fiancee; Corporal Finch, who likes to try and use French words and has a limp, and Shaw, who is the best character in the book. He’s one of those Leon Garfield slightly dodgy father figures in the tradition of Long John Silver. He is a surgeon, and a very good one at that. He’s going about the battleground pulling teeth to sell, the clattering bag of gnashers he then has with him at all times. He’s described as being as odds with himself, fat and awkward, longing for a life as positive as he is but condemned to battlefields and junk piles. He sticks to Charlie throughout, helping and hindering but with a vague, if not trustworthy, goodness.

Also, with a character called Corporal Finch, add another to Garfield’s bird names.

In the course of escaping France, James Digby dies an ignominious death and his ghost follows Charlie around, telling him to tell his fiancee he died well so Charlie and Shaw go to London to do so. There they meet the fiancee, Sophia, who is dying of something nondescript, and her father, the general in charge of the operation that had all the men killed. Charlie falls head over heels for the sickly Sophia and impressed by the general, though as the book goes on, we realise there is more to them than first appear and they take on something of a underworld form themselves.

There were some structures in this that seem almost Homeric. Just as Homer uses stock phrases such as ‘rosy-fingered dawn’ and ‘fleet-footed Achilles’, so this book talks about ‘the scarlet men’ and ‘the golden child.’ Charlie Samson also has a slightly Orpheus quality, he goes to the underworld and communes with lost souls, Sophia Lawrence falls behind like Eurydice and the drum has almost mystical qualities like Orpheus’ lyre. I was not surprised to find this book came out the same year as The God Beneath the Sea.

This book is more slippery than other Leon Garfield works, partly it’s the links to the Orpheus tale (which seem more obvious the more I think about them) but it’s also partly to the ideas in the book are not fully developed. For this reason, characters introduced as villainous slide into being friends and friends into antagonists, the ghost part isn’t properly integrated into the whole and Charlie’s eventual romantic conclusion comes from nowhere.

Not that it harmed the book, it was nominated for the Carnegie award the same year The God Beneath the Sea won the Guardian’s children’s book award. 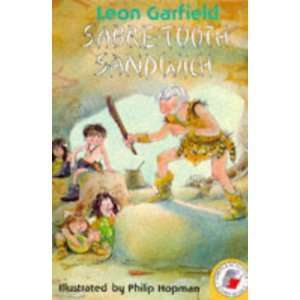 A complete departure from the usual run of things and, I feel, something of a commission. It’s also a book written for younger children and rather short, there are a couple of interesting things about it though.

It’s set in rather nebulous ‘stone-age times’ and features a family of five children, a brutish father, a mother and her queer-coded brother. The brother is a bachelor, very neat, tidy, worries about his appearance with a refined quiet voice. He also has a sharp, slightly bitchy tongue and is awful at the manly pursuit hunting. In this book he invents theatre.

Despite this being little more than a short story, the family dynamics were interesting and the threat of starvation was pretty genuinely felt given the light-ish tone and the colourful illustrations. It’s definitely a book that I’d use with children were we ‘doing’ the stone age as I reckon it would engage them, as it did me. 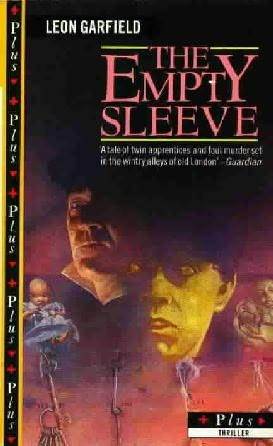 Young man from a poor background - check.
Late eighteenth, early nineteenth century - check.
Older male character who takes protagonist under his wings but may have more to him (either for the better or worse) - check.
Main characters indulges in a little light criminality which we don’t hate them for but establishes them as being in the precarious side of the law - check.
Slightly peculiar ghostly goings on - check.
Themes and characters that should probably not be in a book marketed for children - check.
People with the names of birds - check. (Including: Gannet, Shoveller, Woodcock, Kite, Jay and Crane - also, two main characters being called Peter and Paul, like the dickie birds in the rhyme).
Really striking writing that is far better than many other modern authors - check.

It’s clear that this is, to a certain extent, a by-the-numbers Garfield romp.

There are a few differences to give the book spice though. This book introduces twins, who are of very different temperaments, our hero is a few minutes older and a more burly, physical protagonist than we often find in this sort of book. Garfield’s also very good at finding interesting occupations to explore and this one is that of locksmith and key-maker. There are some interesting notions that because the locksmith has a copy of everybody’s keys (so her can make spares if need be) he has to be a person of strict integrity, although there were those like Deacon Brodie in Edinburgh who didn’t quite live up to this. There’s also the idea that people in charge of such secrets must themselves be very locked up - and it’s the secrets of the locksmith that cause the main tragedy in the book.

There’s the addition of otherworldly elements in the book. The protagonist, Paul is a  ‘chime-child’, a kid born at midnight who will see ghosts and meet the devil, as much as Garfield was compared to Dickens, that feels more like an Harrison-Ainsworth conceit, especially the character of Mr Bagley, the retired old sea-dog who introduces it. He gives the boys a ship in a bottle each, which have a mystic connection to the boys and represent their soul. Then there’s a wall where old workers at the locksmiths put their hands and the handprints turn into ghosts - except for the one with the empty sleeve.

Although The Empty Sleeve might not be much more than a pretty typical Leon Garfield adventure, that is recommendation in itself. Where else would the location be an alleyway where one side is called the sin because of a little wooden devil and the other the God, because of the Christian propagation centre?