Review: The Nun by Aphra Behn 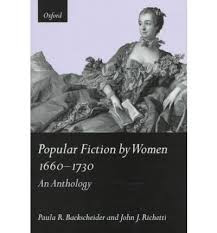 In an effort to clear my writing workload and free up time to work on my exciting new novel, I came upon the most cunning of plans. One of the books on my shelves is an intriguing anthology by Oxford University Press called Popular Fiction by Women 1660-1730. It contains work by authors I’ve not heard much of such as Penelope Aubin and Jane Barker but also a few from favourites like Eliza Haywood and Aphra Behn – they should give me something to talk about for a few weeks.

The first piece in the book is called The Nun; or, The Fair Vow-breaker and is by Aphra Behn. I know she is not an eighteenth century writer but I had enjoyed Oroonoko (and thought I had written a review of it) and was expecting something well written though, from the title, a little generic. What I quickly realised was that this was anything but generic, it’s a rollercoaster of reversals and surprises.

I’m not much one for spoiler warnings but I will issue them for this, the impact of the story is in all the sudden about-faces coming along suddenly.

We start with a man of wealth who feels so depressed with the world when his beautiful wife dies, that he decides to join a monastery and have his charming two year old daughter raised by nuns, the Abbess being her auntie. There’s a lovely couple of sentences about how two is a lovely age and detailing how the nuns fall in love with her 'forward prattling', the toddler being a breath of fresh air. The nuns love playing with her and teaching her everything they know. Which seems to me to be the perfect set up to a story where  the fair innocent is seduced, runs away from the convent and dies in shame and penury.

This is not what happens though. She is encouraged to have a jaunt in the world and to make a decision about whether she would like to be a woman of the world (and have half her father’s fortune) or to stay in the convent. Despite winning the hearts of innumerable men (despite being 13 - ick), she decides the nun’s life is for her.

Of course, as soon as she does this, she meets a man who gets her attention. The wooing is slow, over a number of years (and edging her into less ick age-territory) and she decides to run away with him. They run away together, but he is no rake, they actually genuinely marry and settle down. I was then expecting them to fall out of love because of their poverty but they grow closer together. The cosmic punishment for breaking her vow that I expect from this kind of book is limited to her husband’s poor luck with farming.

That husband goes to war where he dies - this is something I expected. One of her earlier wannabe lovers returns and marries her. He’s rich and showers her with gifts. Now I’m expecting luxury to sour their pure love and tear them apart but that doesn’t happen either, they build a reasonable life of it.

One day, a bearded man turns up who happens to be the first husband who has in fact not died. This twist was a genuine shock to me, expecting that part of the story to have been forgotten now. I was genuinely stumped over what solution our fair ex-nun while arrive at - she isn’t, she smothers him without compunction. Then, when her current husband returns, she spins a lie about how he died of shock when he found she’d married again.

Then came the strangest part of the story, she surreptitiously sews her second husband to her first so that when the second throws the body of the first into a river, he falls in as well. At this point, I am giving huge style points to our protagonist.

At this point I was utterly shocked, not only at her actions but at the way they were positioned to the reader. At no point was she racked with shame but nor did Aphra Behn ever present her as evil or wicked, if anything we admire her ingenuity. It even looks like she’ll get away with the double murder right up until the last two paragraphs in which she is arrested and then executed.

Even then she is never destitute, she is never shamed, she maintains her strength and even (oddly) her goodness. As a prisoner waiting for the axe, she is a model prisoner, using her story to remind others to keep their vows and going to the block as unstained as she entered the story as a spritely toddler.


It’s not a long piece but crammed with so many wonderful surprises and gloriously free of that form of grimy pleasure that ‘moral’ texts can derive from degradation.  An entertaining and shocking work and I recommend digging it up.