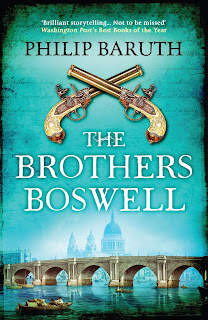 I can’t tell exactly how I found out about The Brothers Boswell, or BozzyBros as my notes called it. All I know, is that as soon as I had realised that there existed a novel somewhere about James Boswell and Samuel Johnson being hunted down by an insane, underrated younger Boswell, I had to read it.

Recently I went to see a play called Teenage Dick which was an interpretation of Richard III but set in an American High School (of the kind I don’t really believe exist). I was very nervous about the play. It either needed to be very schlocky, with their Duke of Clarence being drowned with White Lightning cider (or US equivalent) or it needed to be very clever. Luckily, the play was very clever -just- and it managed to be an enjoyable time on some slightly uncomfortable chair, though a part of me would have preferred full schlock.

The Brothers Boswell tries to be clever but is never quite clever enough, occasionally it leans into its schlock but is not quite schlocky enough. In failing to be one one thing or another, the book manages to be entertaining enough but hints at being far more gloriously silly, or far more intriguing. There are big risks taken but only up to so far.

Take the case of John Boswell. I happened to be at Dr Johnson’s House while I was reading this book and it didn’t take me much to double check the quotations from Boswell’s London Journal and confirm them as correct, including their mentions of James’s younger brother. This brother was a soldier who was committed to an insane asylum for a bit before being shipped off to the family house in Auchinleck and generally hidden away. Making this largely unknown person the narrator and giving him nefarious plans for Sammy and Bozzy was a really interesting notion, it’s the reason I bought the book. How much more would I have enjoyed this book had the narrator been a completely unhistorical Boswell twin, or if the nefarious plan had been a little more nefarious but in these parts, the book played it safe.

There’s a lot of teasing. We learn about John Boswell’s brilliant golden pistols, about his homosexual love affair with an actor and his chaster but still close affair with Samuel Johnson. This all seems like prime, grade-A nonsense, and I was all for it. Unfortunately, it was all revealed to be the result of John’s muddled mind. All that fun, naughty, teasing the Johnsonians stuff evaporated in the final chapters, meaning that John Boswell’s plan was to do nothing in particular for no particular provocation - it’s not nearly as much fun as it should have been.

There are a number of historical folk in this. Anna Williams is described as, ‘a stone-cold charity case’, Garrick appears as smooth and suave as he probably was, and Goldsmith gets an appearance. I was delighted, as this is pretty much the only fictional depiction of Goldsmith I have ever read - but it wasn’t very good. The Goldsmith in this book was peculiarly socially skilled and in the know to such an extent that he could advise Boswell on the right social cues - which is very much not Goldsmith.

In its merit, the book was very intriguing in the initial stages, when John Boswell stalks the friends down to Greenwich and there’s a truly unpleasant depiction of the Boswell family house with the overbearing father. Had the book been simply about the two brothers growing up, it would have been an interesting historical novel - it’s the stalking/thriller-esque plot which means the book didn’t live up to my expectations of it.

As the book is narrated by someone who currently hates James Boswell, it does work as a wonderfully vicious takedown on the character of James Boswell, his moments of sincerity, his joy to be around but also his total self-absorption.

I also liked how there was a unicorn called Charlie.