Review/Trip: Hogarth's Peregrinations (and my own) 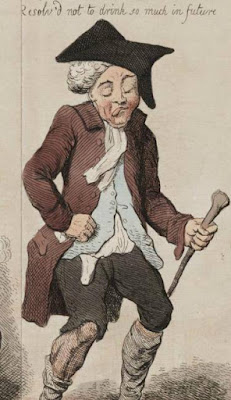 On Friday the 26th of May 1732, the thirty-four year old Hogarth went to the pub with four friends. They had such a good night out that they decided to carry it on, ending up on a five day romp around Kent. When they returned, they compiled a little document to remember it by.

On Sunday, the 27th of May 2018, the thirty-two year old me went on a three day romp with three friends around Devon. I took with me the little document of Hogarth’s and also created one of my own.

The original manuscript was twenty pages long, written by Ebenezer Forrest, illustrated by Hogarth and Samuel Scott. His brother-in-law, John Thornhill provided a map of the journey and William Tothill presents the accounts.

Being an impromptu jolly, the boys only stopped to collect their cash and clothes before jumping on a boat from Billingsgate. There they drank some more and Hogarth posted a caricature of a porter on the wall. Then, at 1AM they took a boat to Gravesend. They had breakfast and walked to Rochester, stopping for a paltry three beers.

Having drunk and walked, they decided to have one of those large eighteenth century meals consisting of, "A Dish of Soles & Flounders with Crab Sauce, a Calves heart Stuff'd And Roasted ye Liver Fry'd and the other appurtenances Minc'd, a Leg of Mutton Roasted, and Some Green pease, all Very Good and well Dress'd, with Good Small beer and excellent Port.”

The next few days were filled with sightseeing, drawing (with Hogarth acquiring crowds to watch him) and quite a few play fights. These fights often involve sticks and dung - one of which started when Hogarth had a shit on a grave and the others, thinking this wasn’t respectful, spanked him with nettles.

Samuel Scott was probably the most prickly. After hiding from a rain shower in a slimy bush, he was not happy to have to clean his coat and panicked to find he’d nearly lost his wife’s handkerchief.

The odd grump aside, the friends piled back to London and into The Bedford Arms in Covent Garden “in the same Good Humour wee left it to Set out in this Very Pleasant Expedition.” The five remained friends ever after, Forrest keeping the book and occasionally pulling it out and reminiscing together.

A little later, when Hogarth and other members had died, William Gostling borrowed the original copy of the peregrinations and turned it into (fairly shaky) Hudibrastic verse. To be fair, it doesn’t add much to the original prose account.

The copy I had included these and all the illustrations, which are a great part of the whole thing. Included at the end, was a picture by Hogarth of ‘no-body’ a man all head an no body, clutching tools and booze. Here it is… 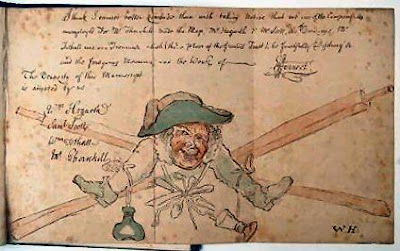 As for my peregrination - four of us traveled to the small town of Crediton, birthplace of St Boniface where we stayed with one of our friend’s parents.

On that first day we had a few gentle pints and explored the town. Crediton had been Devon’s chief town before Exeter overcame it and so contains an 800 year old cathedral that was later de-cathedral-ised. A big, musty building, it contained the tomb of Sir John de Sully. He was a knight with the most amazing career ever. Dying at the age of 106 in 1387, he had fought at Bannockburn and went into the 100 years war, including Crecy, Poiters and, at the age of 79 still fought alongside the Black Prince in Rheims.

The next day was the main one. We travelled to Barnstable and from there, traveled to Exeter along the Tarka Line and drank 12 pints from 12 pubs. Our trip also included outside shits, little moments of grumpiness, lots of singing (mainly Pogues), some darts, some pool and all sorts of hi-jinks.

I also turned the event into a poem - and I may slip that poem in this article at some point.


Alas, none of us were Hogarth, but photos were taken and memories had. We also returned to London, tired but (oddly) not hungover, having had a lovely peregrination of our own.